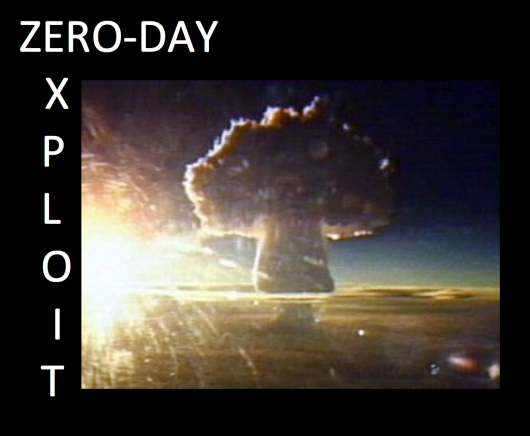 Buying a serious computer vulnerability is now like acquiring a nuke on the black market.

Nations and terrorists will pay to find the fatal flaw in computer programs that will enable them to perpetrate everything from subversive cyber spying to potentially massively destructive cyber attacks.

As the world is focused on nuclear non-proliferation, computer weapons are the new nukes–able to do everything from a targeted strike on an organization or agency to taking out vast swaths of our nation’s critical infrastructure.

According to the New York Times (13 July 2013), there is a great interest in buying “zero-day exploits”–one where governments or hackers can strike using a computer vulnerability before anyone even knows about it and can correct it.

The average zero-day exploit persists for “312 days–before it is detected”–giving amble time for attackers to cash-in!

Brokers are now working to market the computer flaws for a 15% cut, with some even “collecting royalty fees for every month their flaw is not discovered.”

The average flaw “now sells for around $35,000 to $160,000” and some companies that are selling these are even charging an annual $100,000 subscription fee to shop their catalog of computer vulnerabilities in addition to the cost for each one that varies with it’s sophistication and the pervasiveness of the operating system behind the exploit.

While governments and terrorists are on the prowl to buy the exploits for offensive purposes, technology companies are competing to purchase them and are offering “bug bounties” in order to identify the flaws and fix them before they are exploited.

We’ve come a long way from people and organizations buying software with their regular upgrades and patches to nations and hackers buying the knowledge of the flaws–not to patch–but to spy or harm their adversaries.

You can buy the bomb shelter or software patch, but someone else is buying the next more lethal bomb or vulnerability–the question is who will pay more to get the next exploit and when and how will they use it.

(Graphic by Andy Blumenthal adapted from here with attribution for the mushroom cloud photo to Andy Z.)