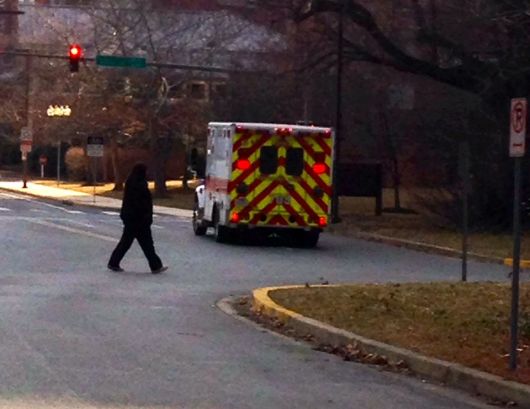 Today, at the pool, someone collapsed.

Most of the people at the pool are in amazing physical condition.

The young folks on the swim team are fast as hell.

The older people, many seem like they never aged and can do still perform adroitly.

I find the whole crew generally quite competitive and if you can’t keep up…you may even get shove to the side.

When I heard the whistle blow this morning, it was unlike the usual stop running or horsing around–this time is was long and shrill.

Everyone stopped and pulled to the ends.

Instead of splashing water, you could hear a pin drop.

Lifeguards started running. One ran back to the control center and I could see him through the glass window dialing quickly on the phone for help.

Another young women was getting help from the pool supervisor–the young one ran, the older one strode sternly to ascertain the situation.

People started swimming in the main pool again, while the collapsed man was out of sight around the corner in another pool area.

The floating lady water runners were kibbutzing about what happened and is he going to be okay.

Eventually the swimming continued, but even then, people were looking around and had those worried faces on.

There was a realization that even with the dozens of people there, this person could’ve been anyone–any of us.

The ambulance and fire truck rescue came, the stretcher was brought in.

I asked the lifeguard with concern what had happened to the man and he said in a monotone, almost practiced voice, “The ambulance is here; everything is okay.”

It sort of sounded like don’t anyone panic and shut the heck up.

Anyway, it was upsetting to see someone up early, getting themselves to the pool, trying to stay healthy and fit, and struck down at the scene, while trying their best.

I’m a little shaken and am still hearing the whistle in my head. :-0