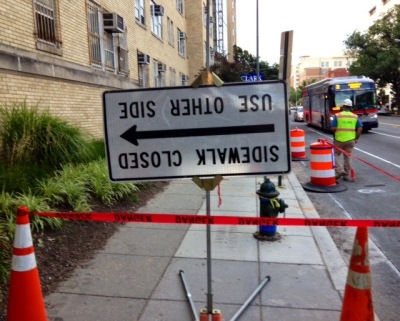 So coming downtown this week in D.C., I see this quite unhelpful posted sign.

If you can read upside down, while rushing down a busy street with a million and one things on your mind for the day, it says, “Sidewalk Closed. Use Other Side.”

Of course, the people flowing speedily down the streets in the morning, were still walking on this sidewalk, despite the construction and potential dangers.

But in a way this reminds me of a bigger question here–is this really a sign of the times?

Today, I read in the Wall Street Journal about continued problems with Healthcare.gov–no, not related to the crashing websites, exemptions and delays, parts being overturned (such as with the contraception mandate), low enrollment (particularly after accounting for over 5 million people that lost their coverage with the new law and in effect had to sign up), but now in terms of thousands of people who signed up not getting their benefits due to continued problems with the enrollment system.

This is not just an issue for this party or that, but rather matters of government that we as a unified nation must tackle togther to grow our capabilities and competitiveness econically, militarily, and socially.

Are the signs pointing us in the right direction and what streets should we be going down as a nation in order to succeed?