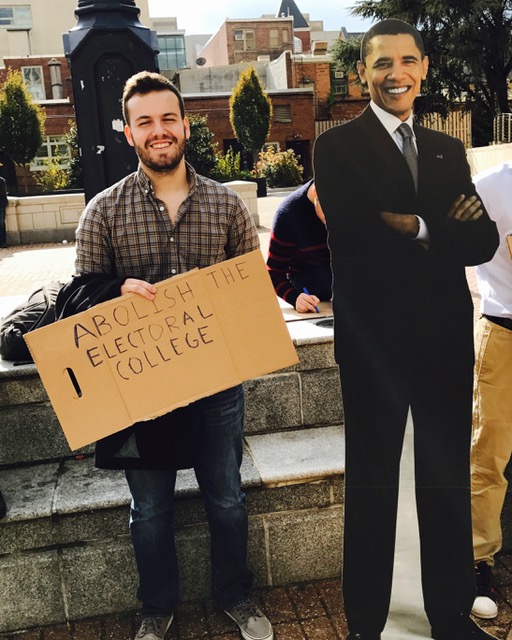 So after the election yesterday, once the results were in, the after shocks were apparent in downtown, Washington DC and across the nation.

– There were quiet spaces set up for people to “console” themselves and each other.

– There were signs like this to change the rules and the system, and abolish the electoral college.

– There were protests and riots.

– There was American flag burning.

– There was yelling, cursing, and crying.

Of course, I understand that the election was an upset to half the population (actually, maybe over half of the popular vote).

And I certainly agree with people who are against bigotry and racism–these are things that should ALWAYS be condemned in no uncertain terms!

However, while trying to take the moral high ground, there is plenty of bigotry and hate to go around–such as branding other people as racists (even if they are not so), calling tens of millions of people “deplorables,” and stating that they are unequivocally “unredeemable.”

Similarly, while attacking one candidate for his sexual banter and (possibly) conduct, the husband of the other candidate was himself impeached from the presidency for his infidelities.

And no matter how big a feminist our beliefs, rather than falsely blaming an unjust “glass ceiling,” in her concession speech yesterday, the candidate should have done a mea culpa and acknowledged perhaps a very understandable “corruption ceiling” that put the brakes on her own trust, likability and electability.

Reminiscent to condemning the violence at the Trump rallies, the hypocrisy of it all, was when it become known that the operatives of the DCN themselves, in Project Veritas, were the ones actually sparking and doing the violence.

Further, one candidate was ruthlessly denigrated for even suggesting that there was election fraud going on, even while indeed town hall questions were being passed from the media by the DNC’s own chairperson to the other candidate and the prior chairperson was fired from the DNC’s actions in their rigging the primary against Bernie Sanders who would have had a decent chance at actually winning “the whole enchilada.”

But what happened to everyone committing to accepting the results of a free and fair election in a democracy–is that only if YOUR candidate wins?

Whether it’s with hate, name-calling, violence, and sore losing…maybe there is a lot of bad behavior along with “calling the tea kettle black” going on.

While we call for the “orderly transitions” of power in Egypt, for Britain with Brexit, and elsewhere in the world, perhaps our leaders should hold ourselves to similar standards of conduct here.

It’s time to STOP the HATE, BIGOTRY, AND VIOLENCE on all sides, and come together to do something positive for this country.

The national security and welfare of the country is at stake, but even more so, the soul of it is still mired in corruption and lies of a very ugly election. 😉