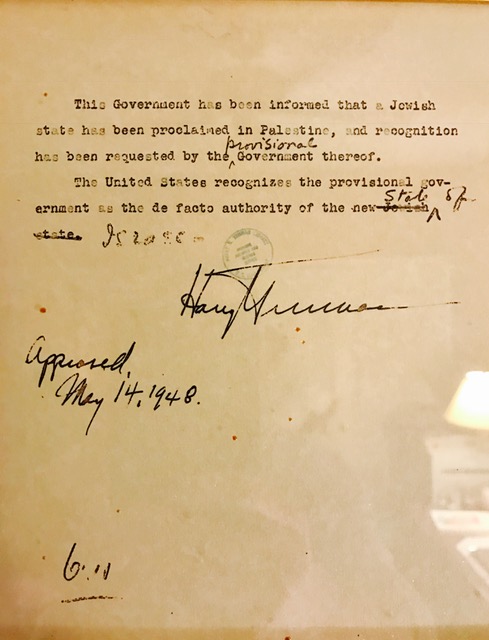 Thought this was so cool…

One of my friends from synagogue has an amazing replica of the letter From President Harry S. Truman recognizing the the State of Israel (with the President’s last-minute hand-written edits on it):

“This Government has been informed that a Jewish state has been proclaimed in Palestine, and recognition has been requested by the provisional Government thereof.

The United States recognizes the provisional government as the de facto authority of the State of Israel.”

And hence the Jewish people went from almost 2,000 years in exile and persecution–culminating in the genocidal Holocaust that wiped out 6,000,000 Jews–to be followed by the founding of the State of Israel and the keeping of G-d’s promise in the Bible:

“On that day the LORD made a covenant with Abram and said, “To your descendants I give this land, from the Wadi of Egypt to the great river, the Euphrates.”

“Then the LORD your God will restore your fortunes and have compassion on you and gather you again from all the nations where he scattered you.”

We are living through historic times!

Now the Headquarters of the State Department is named the Harry S. Truman building…how fitting for all our diplomacy to be called for the President that recognized the State of Israel, as the Bible said.

Then this weekend, I was truly surprised and humbled when another friend from synagogue said that he thinks with all my passion and caring for the United States, Israel and G-d that I could be the U.S. Ambassador to Israel…I couldn’t have be more moved by these lovely sentiments.

As a child of Holocaust survivors and a person of faith who believes deeply that we are witnessing the prophecies of the Bible literally being fulfilled and that we are in the time of the great redemption, I have a vision that we are ushering in the coming of the Messiah and that there will be peace in our lands and enlightenment of G-d upon the Earth.

I hope and pray every day for it to be. 😉