I go to the fridge to look for something to eat.

I find am empty food storage container on the shelf.

I recognize it from the day before when it was filled with delicious over-baked salmon.

So I go to one kid who I guess may be the culprit and I ask:

Why did you leave the empty bowl in the fridge and not clean it out when you were done?

So, I feel like a jerk and apologize for thinking maybe it was her.

Then I go to the other kid and say:

Did you leave an empty dirty salmon bowl in the fridge?

And she says to me:

So I ask rhetorically thinking there was no acceptable reason:

Why did you do that?

She says sweetly to me:

My sister was sleeping and I didn’t want to wake her by washing out the bowl.

And I knew she meant it.

I wouldn’t have imagined a reason for leaving an empty dirty bowl in the fridge, but it just goes to show not to misjudge people–there is usually a reason for everything. 😉 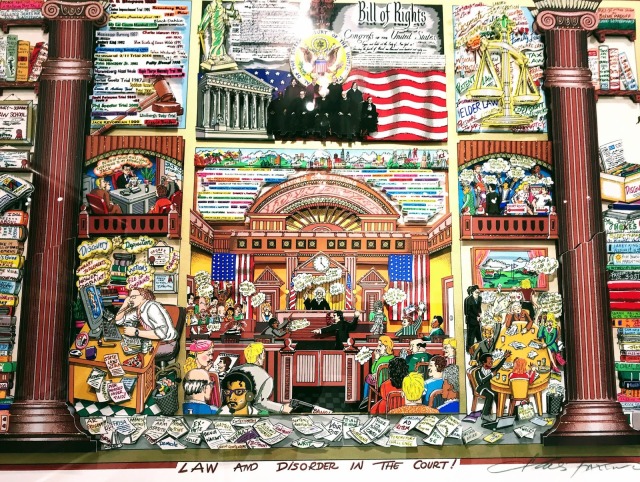 This artist rendering of “Law and Disorder in the Court” reminded me of what is going on now with the nomination hearings on Judge Brett Kavanaugh for the Supreme Court.

This is not a vetting process, but political chicanery, as Dr. Christine Blaseley Ford comes forward with last-minute allegations of groping from a high school party almost 40-years ago.

Being a #MeToo victim of a serial sexual predator in elementary school, I understand the severity of these acts and the injustice of the abusers going scot-free their whole lives.

Yet the timing of this right before the Judiciary Panel vote, the single accuser, the 40-years that have passed without a peep, the lack of anyone corroborating the story, the holding of the accusation for almost 2-months all create at least an air of suspicion on this whole thing.

I truly empathize with any victim of sexual abuse, and for that matter the victim of any violent abuse or assault, and I too seek justice for these victims.

However, this latest political theatre is once again undermining our system of democracy and the ability to get anything done.

Trust in the system is broken because criminals go unpunished, and also because anyone can be accused of anything any time with barely a shred of evidence. “Innocent until proven guilty” has been chucked out the window.

The breakdown of the system of cooperation, compromise, and commitment to progress irrespective of politics in the halls of Washington, D.C. is perhaps the biggest threat that we as a nation now face. 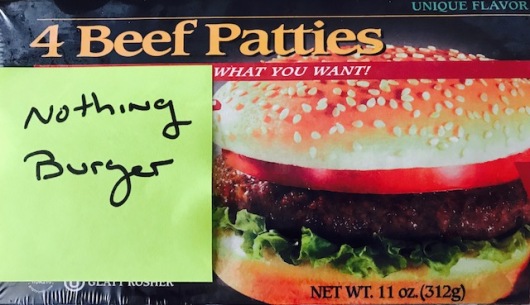 So I’ve noticed that not only in politics–but in life–people are want to throw around a lot of nothing burgers.

This happens when they make vague accusations–incriminating people or groups–but without substantiating what they are saying.

It’s a way of bullying, discriminating, and hating on others.

Creating doubt about your victim–keep saying those derogatory, demeaning, and hateful stories–it tarnishes the other person’s image, reputation, and credibility.

Creating an endless aura of fallibility on the other person’s part.

Here, we go…they screwed up again!

It’s death by a thousand cuts of insults, pot shots, and sucker punches.

It’s a definite form of verbal and emotional abuse and violence.

Sometimes, there may be something to it–in which case the party that screwed up should take responsibility, correct their mistakes, and commit to sincerely doing better in the future.

But often, there is nothing there!

And the false accusations are merely a way to cover up (management) incompetency or bias by the accusers themselves.

It’s a great way to dominate the conversation, but really the people making the stink are simply acting out–and not too flattering as the whiners and complainers.

They point fingers at others, but there are three fingers pointing back at themselves!

Because it’s another nothing burger meant to deceive, discredit, and retard and take the focus off their own meatless patties!

The liars and deceivers and propagandists are using you for their own means.

Another nothing burger in the oven and it ain’t kosher! 😉

So they say about Washington politics, “if you’re not on offense, then you’re on defense.”

In the polarized mood of the nation, this has never been more true.

The alt-left and alt-right are stronger than ever and pointing fingers and fists at one another.

Each side, the ultra -liberals and -conservatives are duking it out over who is is going on the offensive today.

Only to be outmaneuvered the very next day and be placed back on the defensive.

Who communicated with the Russians today?

Who used their private email today?

Who committed perjury and lied under oath today?

Who was offensive and even violent at rallies and protests today?

And on and on…

You’re either on offense or your stuck on defense!

And the more polarized and hateful of each other this nation has become, including in the media, the more the outrageous the accusations and the more alternate facts and fake news.

But what I learned today is that this doesn’t just apply to politics.

Religion is another prime source for discrimination and hate of your fellow man.

I remember learning that over history, more people have died in wars in the name of religion than for any other reason.

So too today, the “crazy-hard line” ultra religious and the “throw-it-all away” irreligious are just as polarized.

Moreover, any disagreement results in insults and loathing over who is morally superior.

Of course, everyone cites sources and authorities to show why their position is the correct one and everyone else is wrong about religion and G-d.

No wonder nothing is getting constructively done.

No wonder children are confused.

No wonder those around us laugh at our seeming inability to come together, all as G-d’s wonderful creatures.

If only we could have a panini instead of all this anger, hate, extremism, and rejectionist bias toward our fellow man. 😉