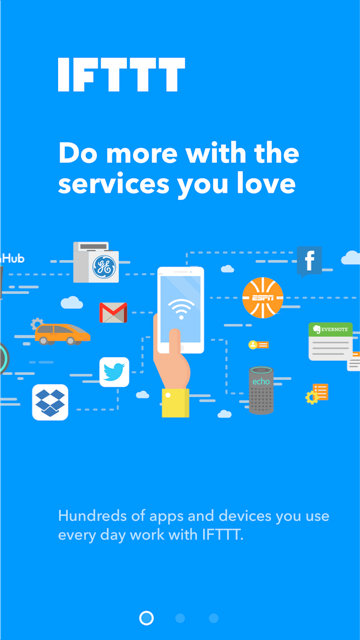 If This Then That (IFTTT) is a simple, but absolutely fundamental programming principle.

It is also the basis for futurist-thinking such as war-gaming and strategic planning.  For example, if North Korea put’s a nuke on the launch pad with the targeting at the U.S., then we will do kaboom!

IFTTT is also an app and is used in algorithms such as with Twitter, so when Trump or other famous and powerful people say something on the global social media stage, Wall Street’s high-speed, high-frequency trading desks are at the front of the line to respond to market-moving news.

So powerful is IFTTT, you could almost predict the election results from it (the outrageously biased media may want to open their tarnished rose-colored glasses and try it).  For example, if you take for granted, forget or neglect working class America, then the great “blue wall” tumbles.

IFTTT also works in politics of all sorts. If you abandon friends and allies and embrace terrorist enemies, then the world order is turned on it’s head and the Middle East and beyond burns and rages in turmoil. Similarly, if you are biased between people, races, and political parties, then you polarize the country and create divisiveness and hate and obstruct even the possibility of virtually any progress.

So you really don’t have to have a crystal ball to see the writing on the wall for the results of profoundly good moves and the display of stupidity galore.

One final IFTTT before the major transition of power this week: if you talk big, but don’t really deliver results (or you deliver lots of bad stuff), then you get seen for being all poetry and no prose, and your legacy goes bye bye. 😉

Meet Octavia, a new firefighting robot from the Navy’s Laboratory for Autonomous Systems Research (LASR) in Washington, D.C.Octavia and her brother Lucas are the the latest in firefighting technology.These robots can hear commands, see through infrared cameras, identify patterns, and algorithmically make decisions on diverse information sets.While the current prototypes move around like a Segway, future versions will be able to climb ladders and get around naval vessels.It is pretty cool seeing this robot spray flame retardant to douse the fire, and you can imagine similar type robots shooting guns on the front line at our enemies.

Robots are going to play an increasingly important role in all sorts of jobs, and not only the repetitive ones where we put automatons, but also the dangerous situations (like the bomb disposal robots), where robots can get out in front and safeguard human lives.

While the technology is still not there yet–and the robot seems to need quite a bit of instruction and hand waving–you can still get a decent glimpse of what is to come.

Robots with artificial intelligence and natural language processing will be putting out those fires all by themselves…and then some.

Imagine a robot revolution is coming, and what we now call mobile computing is going to take on a whole new meaning with robots on the go–autonomously capturing data, processing it, and acting on it.

I never did see an iPhone or iPad put out a fire, but Octavia and brother Lucas will–and in the not too distant future!

We all know that people respond better to some managers than others—for some, people will go “the extra mile.”

University of Virginia professors teaching a leadership class that I was fortunate to participate in shared lessons on this.

Essentially, studies show that leaders that treat their people with trust, caring, and respect—what I would call the basic elements of human dignity—are able to achieve the multiplier effect.

In simple terms, what you give as a leader is what you get back.

Multipliers—leaders that are “multipliers” believe in their people—that they are smart and will figure it out. Multipliers guide them, invest in them, give them the freedom to debate the issues and do their jobs, and they challenge them to be their best. Multipliers are “talent magnets”–people want to work for them, and employees that work for multipliers tend to contribute 200%!

In contrast, those managers that are “diminishers” believe that their employees will not figure it out without them. They are empire builders and micromanagers, who typically act like tyrants, displaying a know-it-all attitude, and they have to make all the decisions. In an un-empowered and disrespected role, employees who work for diminishers withdraw and give less than 50%.

When it comes to motivating our workforce and achieving a multiplier effect, while money and recognition are important, providing genuine autonomy and empowerment to “own the job” and get it done has been found to be the #1 impact on their productivity.

Hence there is a big difference between using technology as a tool to perform a task and doing it in a very directed way (by rules, algorithms, assembly lines, etc.) versus working through real people who have important human needs to work with some autonomy to add value and achieve not only the respect of their manager(s), but also self-respect as well.

When we create a multiplier environment for our employees—one where they can flourish as human beings—they give back rather hold back, and in a highly competitive environment that’s exactly what every organization needs to thrive.

There are two major challenges here for leaders.

One is that leaders who have attained power tend to be reluctant to relinquish any of it to their employees. They don’t see the difference between “empowerment” and their own loss of stature.

The other challenge is that there is always the chance that if you give somebody the tools to build the house, that they will either take a nap in the hammock in the backyard or even try to throw you off the roof!

In the first case, the leader has to have enough confidence to make room for others to succeed. I once heard that Jack Welch said of great leaders that they surround themselves with people who are even smarter than they are.

In the second case, I believe that we need to “trust but verify,” meaning that we provide autonomy and tools to people to do the job, but then if they don’t do it appropriately, that is addressed through individual performance management.

Managing people well is not a favor we do them, but is something that is required for the success of enterprise.

eHarmony and Match.com and other matchmaking sites are all the rage on the single scene with recommended partners for people being done by computer algorithm.

Now this concept of matching of people is going beyond people’s love lives and into the world of business.

Other companies have been doing customer matching on a more elementary level for some time—for example, financial service firms route calls from high-net worth or high-balance customers to “premier agents.” Similarly, calls made at certain time are “routed to Boise instead of Bangalore.”

With computer systems like RAMP, there is a recognition that customers can do better by being matched with specific customer service representatives and that we can use business analytics to examine a host of data variables from sex and age to persistence in calling to match a customer to “the right” representative to handle their issues.

Based on success rates, computers have been shown to perform sophisticated business and data analysis, and to successfully match people for more successful business (and life) transactions.

If we can successfully pair people for love and for customer service, it makes me wonder what’s next (maybe happening already)? For example, will we pair people to “the right”:

In essence, as the “bar is raised” in a highly global and competitive environment, will we be pushed to seek to maximize our potential for success interaction with others—for developing high-performance and highly profitable interactions—by pairing exclusively with those that “screen” positive for us?

With genetic testing already being used to screen for babies that people want—like an order at Burger King—“hold the pickle, hold the lettuce, special orders don’t upset us…”—we are already well on our way to “special ordering” the people in our lives.

Companies have also started to use intelligence and personality tests to weed out applicants, and the use of personality tests like Myers Briggs is already being employed for better understanding each other and working together.

However crude all this may be, it is essentially a high-tech way of trying to optimize our performance. The question is can we use technology to enhance personal interactions and elevate performance without subjecting people to undue bias, criticism, and violation of their privacy? This is a very slippery slope indeed.

Another potential problem with computer matching is that when we rely on computers to “tell us” when we have a good match, we are potentially missing potential opportunities for matches with others that cannot be easily quantified or summed up by a computer algorithm? As they say, for some “two birds of a feather flock together” and for others “opposite attract”—we shouldn’t limit ourselves to any creative, positive possibilities in relationships.