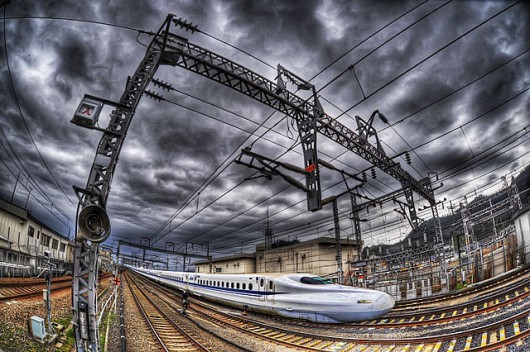 So another tragic major train derailment in Philadelphia this week.

Already 8 people killed and over 200 injured.

All over the news, we see that the train was speeding by going just over 100 mph.

Yes, it was a curve, and maybe we need to build some straighter more stable lines (I believe that is partly what eminent domain used properly is for) and with the latest safety features.

But does anyone ask how can other countries safely implement their trains at far faster speeds–that makes 106 mph look virtually like a mere snails pace in comparison.

U.S.: 149 mph (even the Acela train has the potential to do at least this much, but for the most part they don’t due to shared lines with commuter and freight trains and an aging infrastructure–uh, so where did all that money from the American Recovery and Reinvestment Act go exactly?)

In what now seems retrospectively almost mocking, Japan Railways, International Division Chief stated: “We have a track record of transporting a huge volume of passenger traffic with very few delays or accidents…Because the trains operate so accurately, travel can be made very efficiently [and safetly].”

Do you think we the U.S. can catch up with our 21st century peers here?