These shoes are called Kangoo Jumps.

They provide the high-tech bounce for dancing, running, or other exercise.

This video is from their 2014 International Festival in Florida that I had the opportunity to watch.

Amazing what the participants were able to do and the fun they had. 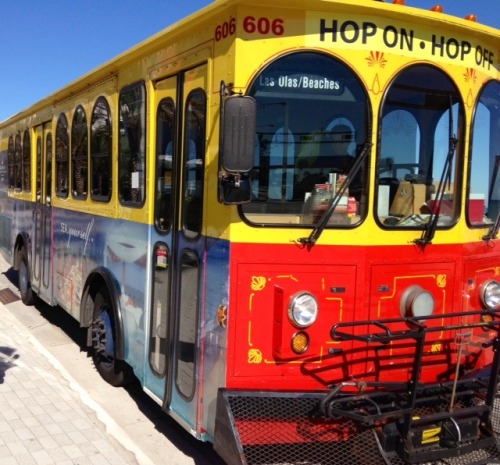 We were really happy to find the Sun Trolley in Ft. Lauderdale.

For 50 cents a person, you can ride between the beautiful beaches and downtown Las Olas Street where there are wonderful art stores, cafes, museums, and shopping.

One day, riding the bus though, there was a technology failure that really made we think about the relationship between man and machine.

On the bus, there was a elderly couple with a teenage girl and a young boy, who was in a wheelchair.

Driving along the beach (and hotels), the couple indicated to the driver that they wanted to get off (these buses don’t stop at pre-assigned stops, but rather wherever people say they want to get on or off).

The bus pulls over and the driver gets up and goes to the back of the bus, and he starts trying to work the device that make the bus wheelchair accessible.

But despite the driver trying to get the device to work, nothing happens.

The women and girl had already left the bus and where standing on the sidewalk waiting. The other people on the bus were waiting to get to their destination as well. And the man and the boy in the wheelchair seemed both embarrassed at the scene, but also worried how they were going to get this heavy wheelchair off the bus.

The driver pulls out some metal pole contraption and is trying to free the wheelchair accessibility device on the stairs–again, over and over–but still can’t get the device to work.

I thought about this poor family, but also about how dependent we are on technology and when it doesn’t work–very often we are not sure what to do, because we just assume it will (like it always does, or is supposed to).

When I saw that the driver was not going to be successful with getting the device to work, I got up and said to the man–can I help you (i.e. to help him with the wheelchair and boy).

Not sure how this elderly man and I would do it, I was glad when another man came forward and offered to help as well.

Between the three of us, we carried the boy and wheelchair down the stairs and off the bus, being careful that the boy was safe and comfortable.

I was glad that we were able to help this family, but also continued to think that technology never will really be a substitute for people, because technology is not only developed, operated and maintained by people, but also that technology invariably can fail, and people must step up when it does.

Technology is great when it works, but it is never failproof, so we had better be prepared for those days when systems go down and we must carry on. 😉

I am very excited by this new assistive technology for personal mobility coming out of Japan that can be used to help the aged or handicapped.Rather than have to buy a separate electric scooter for longer distances that is heavy and can be challenging for people with certain disabilities to use, the WHILLis a simple add-on that can be attached to and removed from a regular wheelchair and can be steered, like a Segway, simply by leaning in the direction you want to go.The WHILL is high-tech looking–like a futurist headphone that you place over the wheels of the chair and according to Gizmodo,it turns the wheels with a rechargeable lithium-ion battery that powers the chair up to 12 mph for 19 miles and then recharges in under 2 hours.While pricing information is not yet available, my assumption is that this add-on will be significantly cheaper than a full-out electronic scooter.

One concern that I have about the WHILL is how someone who is wheelchair-bound will be able to attach/remove the drive-train device without the help of an aide or nurse.  Perhaps an even more futuristic version will have the U-shaped WHILL built with push-button retractable arms, so that the attachment can simply “open up” rather than have to be removed.

Another question that I have is what safety features will be built in for example for automatic cut-off should someone using it get ill and keel over unto the device causing it to drive/spin out of control.  I am thinking a weight-sensor on the WHILL that detects if too much of a person’s body weight is leaning on it and then cause a safety shutdown.

Overall, I am encouraged by what WHILL will soon be bringing to help people in need to get around more easily in the future.