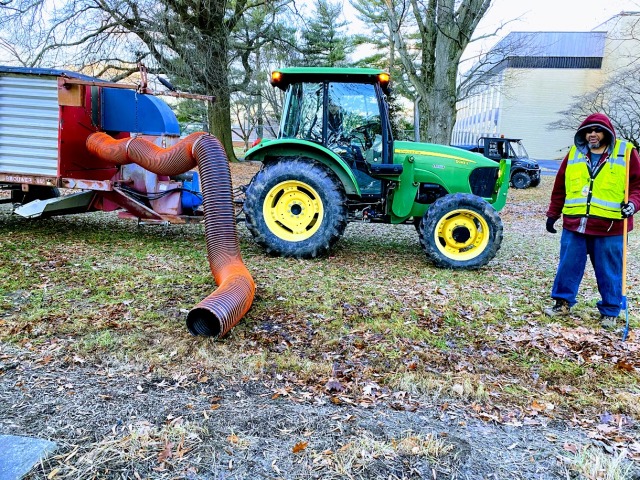 Here we are sucking up leaves in January.

It almost looks like we’re sucking up the whole ground with it!

It’s 52 degrees out, and we’ve been reaching up into the high 60’s so far this month.

Global warming or the big fires in Australia or action with Iran are heating things up here in Washington, D.C. 😉

What a great labeling of this bottle of wine.

Just a big simple smiley face on it!

After I saw this bottle in the store, I just had to take a picture and also look this up on the internet.

It’s part of the “SMILE” wine campaign from Lindeman’s Wines.

Apparently each limited edition bottle reminds you of something that we have to smile about: “family get-togethers,” “discovering new places,” and “randoms acts of kindness.”

Wow, I love this idea.

Wine makes you smile, but so do these wonderful things in life.

And it’s not just showing/associating the product with something positive (like beer and soda commercials always do), but it’s making the product itself smile at you!

I think this is a really smart marketing campaign.

Also, the cute smiley face on the bottle would make this the life of the party.

Check out this video of Rex, The Robotic Exoskeleton.
An incredible advance for the disabled in providing better mobility.
Light years ahead of a wheelchair, Rex enables people to stand, walk, climb stairs, and generally lead more normal and healthy lives.
Rex is not meant to supplant the wheelchair (where you can sit), but to augment meant it (with the ability to stand).
“If you are a wheelchair user, can self transfer and use a joystick with your hand, Rex amy offer you a way to stand, move sideways, turn around, go up steps as well as walk on flat hard surfaces including ramps and slopes.” (www.rexbionics.com)
The idea for REX came from the movie Aliens, where Ripley (Sigourney Weaver, the main character) fights the big mother Alien in a “Power Loader” suit. The exoskeleton designed for transporting and stacking large supply crates is used to do some serious damage to the Alien.
Exoskeletons have been explored as battle suits in movies, video games (Halo), and even in the real military as future combat wear.
Nice to see an application of the technology that can kill/maim to also heal/help people. Of course this isn’t the first time military technology has been applied to the consumer market; for example, the Internet itself on which I am writing this blog, was developed by DARPA.
The point is that technology itself is not good or bad, but rather how we use it, is what determines it’s ultimate effect.
According to CNN, Rex invested $10 million and seven years in developing this bionic dream machine made from 4700 parts. FDA approval is being sought, so Rex can be marketed it in the U.S.
It’s not hard to imagine exoskeleton technology being used not only for helping the disabled and fighting future wars, but also for augmenting the everyday workforce as body bionics to work the fields, build our infrastructure, transport goods, and even for us intellectual types, to run between (or out of those) meetings that much faster.