Another story from a friend of a friend in the office.

A person has someone working for them who hasn’t been working out all that well.

Basically, the staff person is having challenges simply getting their job done.

The boss asks what the problem is and if there is anything they can do to help the person be successful.

The staff person blurts out to their boss that “Nothing is wrong–I just don’t want anyone to say I’m your b*tch!”

For all the possible reasons for not doing your job this one was quite a shocking one.

Sure people have challenges–not everyone is good at everything and it’s not always a right fit, but being worried about what other people think about your doing your job…uh, not a very good excuse.

Seems like something the boss is not going to be able to really fix…maybe a shrink. 😉 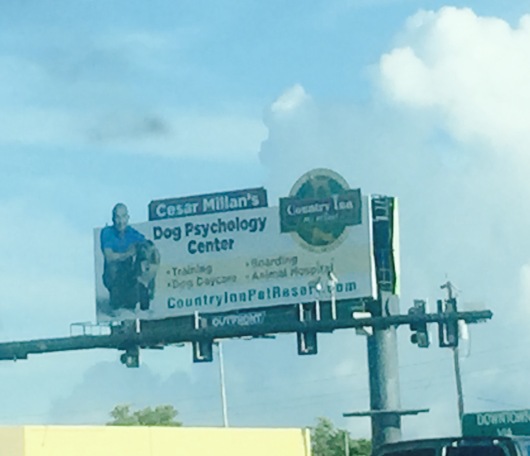 I took this photo of a sign in Florida advertising a “Dog Psychology Center.”


I think my dad would say that anyone taking their dog there should have their head examined!


There are enough people with mental problems that don’t get the help they need that it seems somewhat excessive to have dogs going to the psychologist, but people are still homeless and in rags on the streets of our cities.


At Country Inn Pet Resort your dog can be “mastering the walk,” be socialized, get obedience training, and even learn to swim.


Sounds nice to send your pet to a “resort,” but do they really need a psychologist or do you just want to ignore your pet the same way you ignore your children?  😉

Organizations are all interested in what sells—what’s hot and what’s not!

Of course, as advertisers learned long ago, “sex sells.”

What else? Fear sells. All the basic emotions seem to sell—everything from affection and anger to wonder and worry.

When people experience an emotional drive, their internal (biochemical) and external (environmental) states elicit a psychophysiological response that drives mood and motivation.

The result is that when effectively selling to people’s emotions, we address or meet their explicit or implicit “pain points.”

A want is one thing, but a genuine need or “pain point” is something entirely different. Getting something we want may be satisfying a nice to have on our wish list, but getting rid of a pain point is something that we literally crave to fulfill from physiological and/or psychological motivations.

A good analogy to satisfying people’s wants versus needs is that it’s better to be selling aspirins than vitamins, because “vitamins are nice; they’re healthy [and people want to live healthier]. But aspirin cures your pain…it’s a must-have.”

In technology, there is a tendency to treat almost every new technology as a want and almost every new want as a need. The result is vast sums spent on IT purchases that are unopened or unused that perhaps looked good on paper (as a proposal), but never truly met the organizational threshold as a must-have with a commensurate commitment by it to succeed.

There are a number of implications for IT leaders:

1) As service providers, I think we need to differentiate with our internal customers what their genuine pain points are that must get prioritized from what their technology wish list items that can be addressed in the future, strategy alignment and resources permitting.

2) From a customer standpoint, I’d like to see our technology vendors trying to sell less new mousetraps and focusing more on what we really need in our organizations. The worst vendor calls/presentations are the ones that just try to tell you what they have to sell, rather than finding out what you need and how they can answer that call in a genuine way.

In looking at the emotion, the key to long-term sales success is not to take advantage of the customer in need, but rather to be their partner in meeting those needs and making the pain go away.

There is a new vision for security technology that blends high-tech with behavioral psychology, so that we can seemingly read people’s minds as to their intentions to do harm or not.

There was a fascinating article (8 January 2010) by AP via Fox News called “Mind-Reading Systems Could Change Air Security.”

One Israeli-based company, WeCU (Read as we see you) Technologies “projects images onto airport screen, such as symbols associated with a certain terrorist group or some other image only a would be terrorist would recognize.”

According to the article, a more subtle version of this technology called Future Attribute Screening Technology (FAST) is being tested by The Department of Homeland Security—either travelers can be passively scanned as they walk through security or when they are pulled aside for additional screening are subjected to “a battery of tests, including scans of facial movements and pupil dilation, for signs of deception. Small platforms similar to balancing boards…would help detect fidgeting.”

The new security technology combined with behavioral psychology aims to detect those who harbor ill will through the “display of involuntary physiological reactions that others—such as those stressed out for ordinary reasons, such as being late for a plane—don’t.”

While the technology married to psychology is potentially a potent mix for detecting terrorists or criminals, there are various concerns about the trend with this, such as:

1) Becoming Big Brother—As we tighten up the monitoring of people, are we becoming an Orwellian society, where surveillance is ubiquitious?

2) Targeting “Precrimes”—Are we moving toward a future like the movie Minority Report, where people are under fire just thinking about breaking the law?

3) Profiling—How do we protect against discriminatory profiling, but ensure reasonable scanning?

4) Hardships—Will additional security scanning, searches, and interrogations cause delays and inconvenience to travelers?

5) Privacy—At what point are we infringing on people’s privacy and being overly intrusive?

As a society, we are learning to balance the need for security with safeguarding our freedoms and fundamental rights. Certainly, we don’t want to trade our democratic ideals and the value we place on our core humanity for a totalitarianism state with rigid social controls. Yet, at the same time, we want to live in peace and security, and must commit to stopping those with bad intentions from doing us harm.

The duality of security and freedom that we value and desire for ourselves and our children will no doubt arouse continued angst as we must balance the two. However, with high-technology solutions supported by sound behavioral psychology and maybe most importantly, good common sense, we can continue to advance our ability to live in a free and secure world—where “we have our cake and eat it too.”