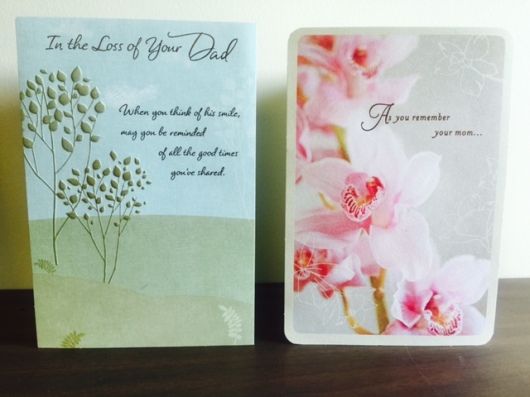 So grateful to my wonderful colleagues and friends here at the Department of State.

Cards for the loss of my mom and dad…one year apart, but I put them side by side, where they belong.

I miss my parents, but this is a beautiful reminder to me that they are together in Heaven!

I am thankful for the wonderful caring people I am surrounded with who provided me their support and warm sentiments during this challenging year.

Hoping for G-d’s blessings and a better future.

While sitting in mourning (Shiva) for my dad (as previously I did just last year for my mom), people come and say the ancient Jewish words of comfort:

“May the Almighty comfort you among the mourners of Zion and Jerusalem!”

The experience of sitting Shiva is humbling, being in mourning, sitting on a low stool, unshaven, and with torn garb, and reciting the words of the Kaddish (mourners prayer) out loud.

“…May He who makes peace in the high places, grant [in his mercy] peace upon us, and upon all Israel, Amen.”

But more than anything, I have been overwhelmed by the outpouring from so many good people in the community.

People have come to pray with me, tell me wonderful stories about my dad, and generally share with me in my mourning for him.

I have been truly taken by the many people who have come both in good health, but also from people that were blind and with everything from broken arms to walking canes and to those who called thinking of me while they themselves are sick or even wheelchair-bound.

People have shared their own stories of grief to let me know I wasn’t alone, and they brought food so I definitely wouldn’t be hungry.

Others have told me how wonderful my dad was as a friend and in the community, how he made people smile and was always in good spirits (even perhaps when he had good reason not to be), and how he did so many good deeds (some that were known and many others that were not).

I have been amazed how people stay not just for prayer services, but take the time to really talk to me, to give selflessly and generously, even from their own busy family and work lives and schedules.

Some of the people I know from the community, some just knew my dad, but I realize how these good, giving people are really worth knowing as human beings–not because they were my dad’s friends or gave to me at this time of mourning, but because they are truly spiritual people, who just desire to do some good in the world–like my dad who did this for others (and how he taught me all my life and especially as a child).

I hope that this time of mourning is not just one of finding comfort and healing, but also a re-awakening of my own feelings for community, spirituality, and selflessness.

I have much room for personal growth for myself, but also many role models around who have set the bar very high. Also, my dad has left some VERY big shoes for me to fill. 😉

One of the scariest things for many people is not being with other people.

I don’t mean intentionally not being with others–taking time away from the hustle and bustle for yourself–but rather being left alone.

Think of the horrors of POWs kept in isolation, prisoners put in solitary, or just everyday kids icing out other children in school, adults marginalizing colleagues at work, and family members abandoning spouses and children at home.

Elizabeth Bernstein makes the distinction between being alone (a potential voluntary state) and loneliness (when you feel that you are forced into an isolated state) in the Wall Street Journal today.

It’s an awesome article that explains so much about loneliness:

– We all experience loneliness from “homesickness, bullying, empty-nesting, bereavement, and unrequited love.”

– Loneliness can occur when you are without anybody (“isolation”) or with the wrong somebody (“dissatisfaction”).

– It’s a survivalist function and evolutionary to feel scared when your alone, because when you are “too close to the perimeter of the group, [then you become] at risk of becoming prey.”

– Loneliness is also associated with memories or fears from childhood–when we were young and vulnerable–that someone wasn’t there or going to be there to take care of us.

– Too much loneliness is a “strong predictor of early death”–greater than alcoholism, 15 cigarettes a day, or obesity.

– Loneliness can be placated by “reminding yourself you’re not a [helpless] child anymore,” building emotional health and personal self-sufficiency, doing things you enjoy when alone, and reaching out to connect with others.

She jokes at the end of her article that when we aren’t feeling lonely, we are annoyed that people just don’t leave us alone.

This is a very real concern as well, especially with a multitude of family needs (significant others, young children, elderly parents), 24×7 work environments, and the reality of pervasive online communications and even invasive social media.

Not exclusive to introverts, too much people can make us feel put upon, crowded, and even worn out–and hence many people may even run from excessive social activity and crowds.

Yet without a healthy dose of others, people can literally go crazy from the quiet, void, boredom, as well as from the real or perceived feelings that they are in some way unworthy of love or affiliation.

So even though some people can be annoying, users, or try to take advantage of us, no man is an island, and growth, learning and personal serenity is through degrees of love and connection, for each according to their needs. 😉