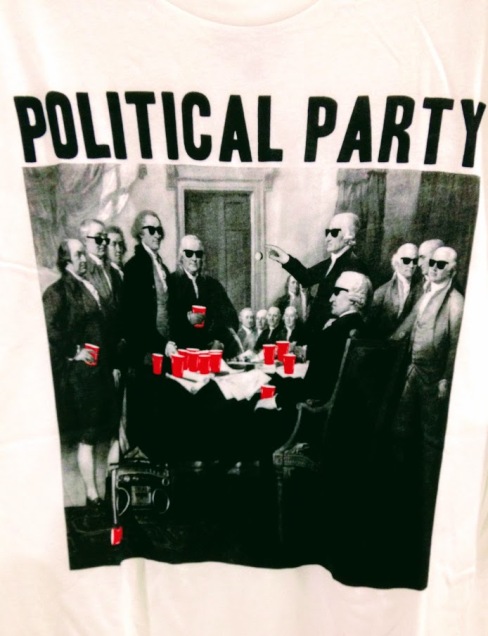 I heard this new term that I thought was worth sharing:

Not all of them are, obviously.

Could it be a whole “political party” too? lol

If only everyone was pure of heart and intention. 😉

(Credit Photo: Andy Blumenthal, and note that no disrespect intended to anyone)

This so reminded me of…

Veterans Day must be a great day to get your windows washed.

Or to spin a web of intricate proportions in D.C. politics.

Either way aside from the windows, what of significance is actually getting resolved in our partisan capital?

James Comey–only 37% through his tenure as Director–is fired for the (mis)handling of the Hillary Clinton email fiasco.

But Hillary never even saw justice.

The politics in Washington is forever an ironic cliffhanger.

And the republicans who supposedly benefited by Comey closing and opening of the case against Clinton are signing praises for his release.

Nothing is ever as it seems.

Aliens could be falling from the sky and it would still be a political event.

Washington conspiracy and counter-conspiracy theories…but the work of the people does it ever get done?  😉

I was teaching a class and gave the students a challenging scenario and problem and asked how they would solve it.

The class was a mix of leaders and managers from the public and private sectors–this time weighted mostly on the commercial side.

Typically, the students from the government usually provide answers in terms of lengthy analysis processes, negotiations, vetting and getting buy-in and approvals through many layers of bureaucracy and red tape, as well as getting people to understand the what’s in it for me (WIIFM) value proposition.

However, this time, one the students from the private sector said bluntly, the following:

We can either do it the easy way or the hard way!

So I asked, “What do you mean the easy and hard ways?”

The easy way is that we can try at first to appeal to people, but if that doesn’t work then the hard way is we just do what needs get done.

Again with great interest and curiosity, I inquire, “And how do you that?”

This time someone else answers, and says:

We do “rip and replace”–we pull up the truck in the middle of the night and we rip out the things we don’t like and replace it with what we do, period.

Then I ask innocently again, “So what happens the next morning?”

And the 2nd person answers again, and says:

Who cares, the job is done!

This reminded me a little of the old images of the mob gangster pulling up in the shadows of the night to someone’s door that wasn’t cooperating and applying the baseball bat to the knees!

Yes, it’s a very different and extreme way of getting what you want and when you want it, done.

Quite a BIG difference between the private and public sector approach to getting thing done!

One one hand, we have the speed and execution of the marketplace versus the more lengthly thoughtfulness and inherent compromises of government and politics.

What’s it gonna be–some bureaucracy, seemingly endless red tape, and horse-trading or the good ol’ baseball bat to the knees? 😉

So before the holidays, like Thanksgiving, many nice organizations try to do a little something for their employees and let them go home a little early.

It’s a small something that let’s people know they are appreciated, and on top of it, they get to “beat the traffic.”

I heard from someone that one organization was stopping this long time practice, saying that only the very head(s) of the chain of command, could do this for the people…but they didn’t.

Sort of “penny wise and dollar foolish” to take away that little spot-on giving to one’s staff.

It’s goodwill, appreciation, and kindness that is especially appropriate before the holidays for hardworking and good people.

One manager told me how their people especially looked forward to this little gesture, and often came to asking about it with such joy.

So the manager told me that they just said before holiday times, “I’m not looking what time you leave today.”

To me that sounded like genuine leadership, where people are not just treated as “human resources,” but instead “human capital”—something to invest in and not just something to use `willy nilly. 😉

This sign from yesterday reminded me of the debates last night.

Arguments, attacks, and counterpunchs between the candidates (and the parties they represent).

But in the end, the sign is pointing us in the wrong direction anyway.

While we keep hitting each other up for getting and maintaining the awesome scepter of American power, our competitors on the international stage are moving on with their personal and national agendas, and we are in seemingly perpetual gridlock.

The big problems that we face are not going away, and declaring who is the winner of the showtime debates, daily rallies, and witty sound bites, may feel good from the standpoint of whether our candidate is winning or not, but frankly is not solving any of our problems either.

A good fight is spectacular to watch, but we can be our own worst enemies as we are lost in shallow policy and rhetoric debates amidst leadership confusion, indecision, and (un)popularity contests, and even the winner may take home nothing but the rights to hoist another upside down sign.

So I took this photo of a handout being distributed at a major local university here in Washington, DC.

…to be handed out in the capital of the United States of America!

It would make sense that this negative notion of big government is connected to the low approval ratings of Congress (17%) and government services (64.4) provided.

People are seeing and sensing that big government is bad government when it is:

– Self-serving for the politicians that are elected to serve the people.

– When it is bureaucratic and ineffective.

– When it is confused and without vision or plan for the country.

– When it is lacking in basic values of democracy, freedom, and human rights for all.

At the same time, big government can be great government, when it is a beacon of light for its citizens and for the nations of the earth.

– When it protects us from dictators, demagogues, terrorists, weapons of mass destruction, criminals, and all sorts of disasters.

– When it holds strong and cutting-edge the economy, prosperity, innovation, education, and competitive advantage of the nation.

– When it safeguards and keeps sustainable the environment for future generations.

– When it preserves and fortifies freedom, human rights, social equity, equality, and justice.

– When it looks after the needy and less fortunate.

– When it lead the world in exploration, discovery, partnerships, and ultimately doing good for the people, the planet, and our future.

Big government sucks when it goes wrong and then they start handing out these sad signs on our nation’s premier college campuses.

This is a big problem to turnaround?

But with smart, committed, and moral leadership it can be done! 😉