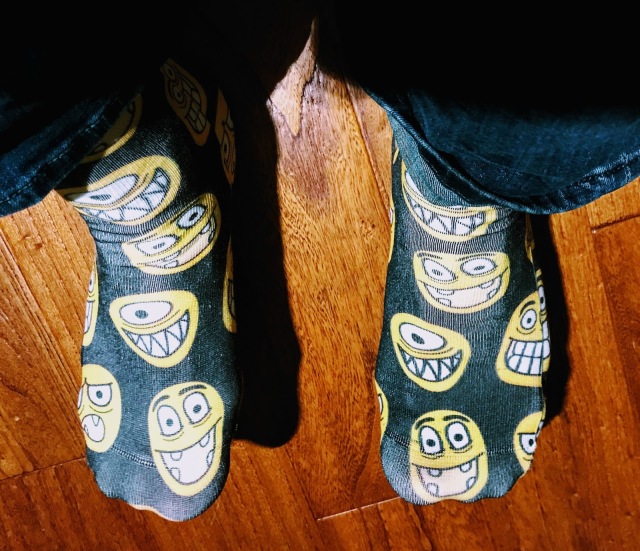 What do you think of my special Friday socks?

These make me feel relaxed and happy.

Wishing you all a great Memorial Day weekend!

Sharing this “fashion” photo that I took in Washington, D.C. this week.

This Summer dress is colorful, happy, and cool.

It makes a bold statement with an almost tie-dye like design and flowing colors almost wrapping the woman in the brilliant spiraling motif.

While it is casual, it is also relatively modest through it floor length.

In a fairly busy city, this dress was a stand out and IMHO was a Summer fashion yes. 😉 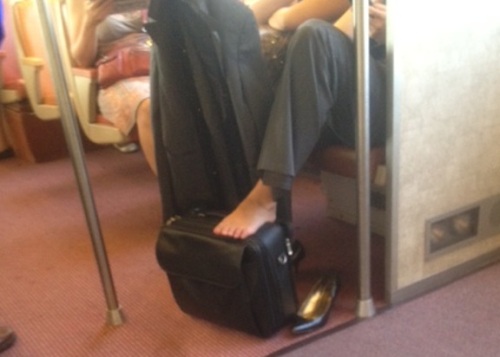 This picture is from the train home from work this week.

This lady took the opportunity to literally sprawl herself out on the train.

She had a rolling briefcase with the arm fully extended.

To which she casually hung her jacket with the collar sloppily up.

She slumped up in the seat, and then took off her shoe and put her foot up on the briefcase.

Then she began curling her toes–back and forth–while she listened to her iPod or iPhone (not sure which it was).

Later she threw her handbag under her seat behind her shoe.

Must’ve been a tough day for her or is this just her way?

I remember learning from my early days in MBA school that you should always dress at least one level up (or more)–i.e. make yourself look the the part of the job you really want.

If you see yourself in that position and can make others see you in that role too then eventually you’ll be the guy or gal!

I’ve seen people dress up and down in the office–of course, the ones that spend the money and take the time and effort to dress for success, look pretty impressive.

At the same time, the clothing and accessories, while they may help the person look put together–sometimes are nothing more than “lipstick on a pig”–the clothes disguise the true person–and they are not very impressive on the inside.

I’ve heard some successful people in town preach that how you dress is absolutely critical and they chide others for not straightening their belt and shining their shoes.

This past week, I heard the opposite from someone who said he looks at people in the hot summer weather, and if they are dressed in a “coat and tie,” then he writes them off, since they don’t have even the basic common sense to dress for the season.  This guy, while himself a boss, was literally in a t-shirt in the office!

I personally always sort of liked the Silicon Valley–high-tech dress code–like Steve Jobs–a black tee (or turtle–too hot for me) with jeans and maybe a relaxed sports coat–comfortable and freeing yet sort of casually-classy.

While some people say that the dress makes the person, I think that what is inside is what really counts–although talking off your shoes on train is not going to win you any promotions or brownie points, for sure. 😉