A very interesting article in the Washington Post on the prepper movement.

People are concerned about the inaction, misdirection, and chaos of where things are going, and they are preparing for a potential post-apocalyptic America and world.

Grave worries seem to be coming from a multitude of concerns whether about an eventual bursting of the bubble of our national debt and the downfall of our economy and associated good jobs, an outbreak of ebola or a deadly influenza, a dirty bomb by Iran or North Korea, a cyber attack or EMP that takes out our critical infrastructure including electricity and anything with computer circuits, or a devastating natural disaster, many of which are considered “overdue.”

The preppers are moving to the American Redoubt (pacific northwest–Idaho, Montana, Wyoming, Washington and Oregon.

They are buying and building defensible homes (bunkers and “fortresses”), stockpiling food, weapons, and ammunition, and preparing for life off the grid with water sources, solar farms, and secure storage.

While survivalists have always existed, the numbers of concerned, disaffected, and generally disgruntled citizens seems be growing exponentially along with prepper network shows, books, blogs, websites, and sales of survival gear.

Many people seem to either feel insecure, fearful, uncertain, or that we are simply going in the wrong direction, and that it is only a matter of time until there is some sort of major earth shattering, society destabilizing disaster, and not everyone will survive.

So from home shelters to luxury underground bunkers, preppers are putting their money and efforts where their mouths are, and are preparing for potentially the worst.

If as all agree that an important part of the government’s job is to ensure the national security of the country, and protect life, liberty, and property, then something seems to be going very wrong that many people are feeling so insecure and unprotected physically and in terms of their human rights.

From corruption to divisiveness, dependency, and dirty dealing, communication and trust between government and the governed is being needlessly undermined.

Why can’t we get some decent leaders with a solid moral compass, and a real plan to bring us back from forever walking the brink to a nation of strength and unity, prosperity and health, and a superpower not only today, but for the future, once again. 😉 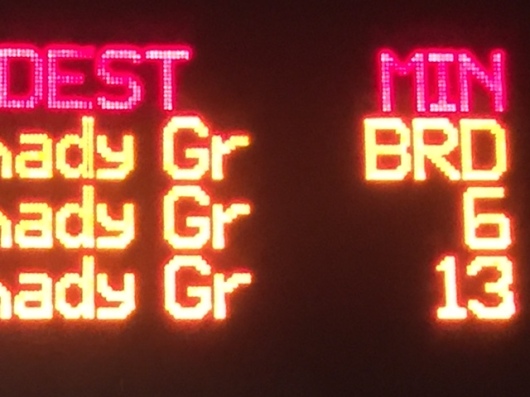 So this was pretty amazing with the mystical number 613.

Today, it showed up on the arrivals board for the trains, and I literally had to run down the train platform to capture this photo after my daughter saw it in the distance from the escalator.

Under destination (DEST) and minutes (MIN) for wait, the first line says boarding (BRD)–although just a moment before it said arriving (ARR).

Then the next two lines has the trains arriving in 6 minutes and in 13 minutes, respectively.

Also note that this same morning I saw 613 twice more (for a total of 3 times) on the train car/doors and in the phone number for a truck parked in front of the grocery.

I am no prophet, but I believe that something important or perhaps cataclysmic is about to happen (“arriving”) in the world.

Interestingly enough, in 10 days is Passover–the redemption of the Jews from slavery in Egypt along with the giving of the 10 commandments (of the total 613) on Sinai.

Now is a good time for faith, devotion, and prayer–that is my feeling for what it’s worth. 😉

Should we worry about something that hasn’t happened to us yet?

Wired Magazine (Sept. 2012) has an interesting article called Apocalypse Not.

Its thesis is that “people freak out over end-of-the world scenarios” and they should know better because despite all the fear and predictions of catastrophe, nothing ever really happens.
It categorizes the doomsday cataclysms into 4 types:
1) Chemicals–these come form things like pesticides (like DDT), smoking, and CFCs, and result in air pollution, acid rain, ozone depletion, and climate change.
2) Disease–recent fears of pandemics were associated with bird flu, swine flu, SARS, AIDS, ebola, and mad cow disease.
3) People–we can cause our own hell through population explosion and famine and although it didn’t mention this, I would assume the brutality and wars that can wipe entire races out.
4) Resources–Peak oil theory, metals and minerals, and other resource constraints have been causes of consternation leading us to look for alternative energy sources and even recently consider mining minerals on asteroids.
The article goes so far as to poke fun at those who are concerned about these things even stating that “The one thing we’ll never run out of is imbeciles.”
Wired does acknowledge that while “over the past half-century, none of our threatened eco-pocalypses have played out as predicted. Some came partly true; some were averted by action; [and still] some were wholly chimerical.”
What the author, Matt Ridley, has missed here in his logic are a few main things:
– Smaller things add to big things–While each individual issue may not have reached the catastrophic tipping point been yet, these issues can certainly progress and even more so, in the aggregate, pose dangerous situations that we may be unable to contain. So you can choose to live with blinders on for today, but the consequences of our choices are inescapable and may only be around the next bend.
–Recognizing the future–just because things like death and final judgement haven’t happened to us yet, doesn’t mean that they aren’t in store for us in the future. This sort of reminds me of this Jewish joke that no one leaves this world alive.
– Destructive powers are multiplying–many destructive forces were traditionally local events, but are now becoming existential threats to whole civilizations. For example, how many people globally can we kill with weaponized pathogens and how many times over now are we able to destroy the world with our thermonuclear stockpile.
– Learn from the past–Apocalypses and terrible events have already befallen humankind, whether the bubonic plague in the middle ages, the destruction of the ice age, the flood in biblical times, and even more recently the Holocaust and the World Wars in the 20th century.
Unfortunately, there is no shortage of bad things that can happen to people–individuals or many people–and if we are not conscious of the things we are doing, their potential impacts, and generally act smart and ethical, then bad things can and will most-definitely happen.
Wired ends by saying that things like policy, technology, and innovation can solve the day. However, while these can surely help and we must always try our best to have a positive impact, some things are also out of our control–they are in G-d hands.
Finally, while not every event is an existential threat, some surely can be–and whether it’s the impact of an asteroid, the death toll from the next horrible plague, natural disaster, cyberwar, or weapon of mass destruction, or even possibly when aliens finally come knocking at your door, it would be awfully stupid to think that bad things can’t happen.
(Source Photo: here with attribution to tanakawho)