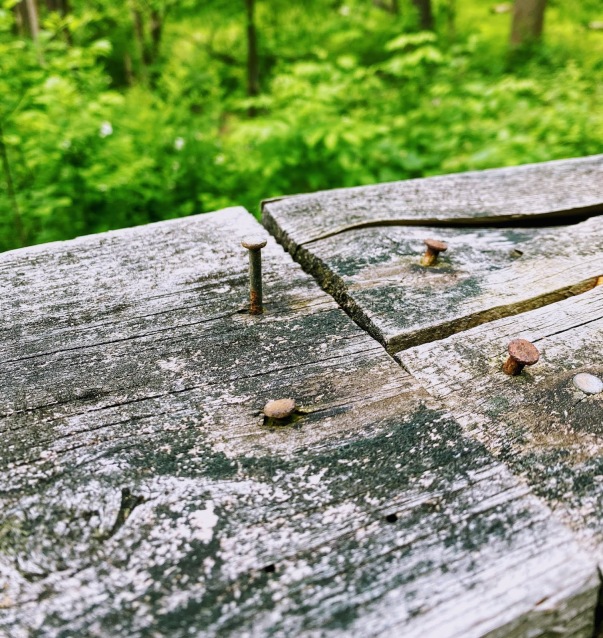 So everyone knows what happens to the nail that stands out…

It gets hammered down!

Deviation from the norm or the groupthink is met with a resounding klop on the head.

You conform or you face the guillotine.

Freedom, individuality, diversity, self-expression—these are the engines of innovation and growth.

If every nail gets hammered down, you have a society that implodes with inbreeders and Stone Age stale ideas.

Tradition is one thing, a closed mind is something that is an extinction level event. 😉

I took this photo yesterday of a mannequin that shows off her hair.

It’s amazing what hair does for a person.

I remember learning in Yeshiva that hair is considered the crown on a person’s head.

People go through all sorts of time and expense to keep their hair, grow it out, clean it, and style it.

Often not having hair means that person is sick and on heavy doses of medication or chemotherapy that makes their hair fall out.

People put on wigs or other head coverings for religious piety, modesty, and to consecrate themselves to G-d and/or their beloved–so that only they should see it–as something special between them.

Sometimes, a person’s hair is cut off to dehumanize them like the Nazi’s did to the Jews and as happens to other prisoners.

Also, when people go to the military, they are given a crew cut to take away their hair and individuality while they learn to conform and be obedient to their chain of command.

Often in fights, people grab and pull a person by their hair to control and hurt them.

But mostly, hair is soft, sensual and looks good on a person (except when it doesn’t)–generally, it evokes youth, vibrance, freedom, and sexuality.

Of course beauty is only skin deep, but the hair is truly the majestic crown that G-d gave us. 😉