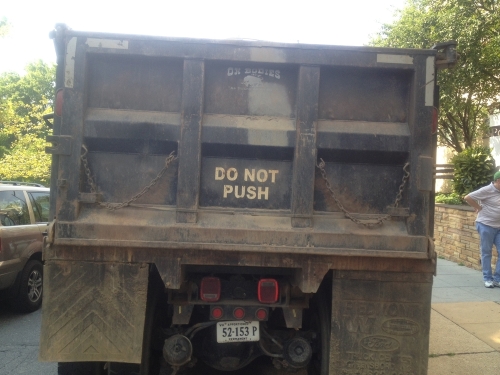 I don’t know a lot about huge dump trucks.

But I wondered what this meant when it says on the back of this multi-ton vehicle–“Do Not Push”.

In life, we often communicate things that either we aren’t really clear about, don’t mean, or end up being misunderstood for.

In fact, probably one of the toughest “soft skills” to learn is communication skills.

I don’t know why they call it soft, since when you communicate poorly, you can get hit over the head–quite hard.

One of the biggest issues is people who talk too much (i.e. they dump on others), but aren’t very good at listening. Hey, they may as well be talking to themselves then, because communication is a two-way street.

Good communications skills include the three C’s: clarity, conciseness, and consistency, and I would add–last but not at all least–a T for tact.

Communication skills also overlaps with the ability to effectively influence, negotiate, and create win-win solutions, so actually communication is at the very heart of what we need to do well.

When communicating, don’t be pushy and don’t be pushed around (i.e. get dumped on)–and don’t get hit by that over-sized dump truck–communicate early, often, honestly, and with passion.