I love my Apple iPhone, but this core product debuted in January 2007.

Don’t get me wrong, the iPhone is enormously successful:

But, the new growth that Apple seeks in not based on any real exciting innovation.

– Apple’s iPhone 3-D Touch that controls the smartphone based on how hard you press.

Google has a similar problem with their core business of advertising on Search and YouTube accounting for 89% of their revenue.

But at least Google continues working towards their next moonshot, and has reorganized their innovation labs into a separate entity called Alphabet–working on everything from:

Unfortunately for Apple, the death of Steve Jobs in 2011 has meant the loss of their driving force for innovation.

Despite a workforce of about 100,000 and a gorgeous new flying saucer-looking headquarters, can you think of any major new products since Jobs?

Apple is a fruit in it’s prime–ripe and shiny and hugely smart and successful, but without any new fruits going forward, they are at risk of becoming a stale mealy apple, versus a bountiful and delicious fruit salad.

Apple is very secretive, so maybe the fruit is coming.

I hope for our sake and theirs that Apple is seriously planting for the future and not just harvesting on the past. 😉 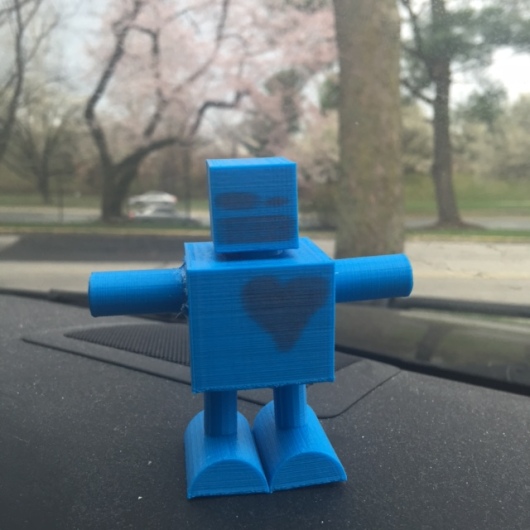 So my daughter is graduating high school, but is already taking a class in 3-D printing.

(This little guy pictured here was made experimenting in the class and was a precious gift from her.)

Already prophetically envisioned in Star Trek as “the replicator,” this technology has been around in primitive trial form since the 1980’s.

It makes traditional 2-D printing (on paper) look like rubbing two sticks together to build a fire (circa the paleolithic period of mankind thousands of years ago).

The promise of 3-D printing for advanced manufacturing is absolutely incredible.

The Wall Street Journal describes how NASA researchers and engineers are working toward using 3-D printers in space to “make bricks suitable for airtight buildings and radiation proof shelters” simply using the sand already on Mars.

Moreover, the astronauts on their journey may be eating pizza from these printers as well (except for the sand, but still probably better than MREs–Haha).

In the future, 3-D printers could be sent in advance to planets we look to colonize and “lay down landing pads, roads, and shelters” in preparation of our arrival.

These printers could even build working replicas of themsleves or “swarms of self-assembling construction robots” boosting our capacity for even more building.

Moreover, technology is in the works to recycle from 3-D printing by melting down the printed products back into material that could be reused for new printing projects.

On Earth, where we have long been drawing down our natural resources as well as polluting our environment, the prospect of going to other worlds where their are new resources and we actually have the ability to use them constructively is humanity’s chance for a whole new chapter of life beyond. 😉

Some people think the new Apple HQs (or Apple Campus 2) looks like a flying saucer or spaceship–to me, it looks like a great big donut. 🙂

In all seriousness though, the planned Apple HQs is so cool–I love it!

Bloomberg BusinessWeek (4 April 2013) has a terrific article about this awesome design project.

Some of the facts about this planned facility:

While some think that this building is vanity, I think it is a work of art, and perfectly suits the innovativeness nature of the company.

Apple’s HQS is a reflection of itself, not just another building. The beautiful, sleek, and high-tech building melds with the company’s design philosophy and vision for great consumer products.

Just like Apple’s unique positioning in being able to integrate hardware and software solutions for their customers, their new HQS is a unification of their physical work environment with their internal vision for themselves as a company and the amazing products they put out.

Unlike some organizations which are foolishly tearing down all their walls and working as if they in sitting in Starbucks, Apple understands how to marry the need for a social and collaborative work environment with a proper and respectful functional space.

Apple’s building will be beautiful and functional just like their computing devices…and they remain true to themselves and us. 😉

It used to be the military technology often found application in the consumer world (like the development of the Internet from DARPA). Now, consumer technology is being used in battlefield theatre (for example, iPods and iPhones).

Enterprise architecture is being turned upside down in terms of the traditional migration path of technological innovation.

Perhaps, the practice of applying technological innovation to other areas regardless of from where they originate is the best model of them all!

In this way, we share and match the best and brightest ideas and product designs to new areas of applicability, opening up more uses and markets for successful product launches.

Increasingly, design is taking center-stage across technical and everyday products in our economy.

The Wall Street Journal, 4 January 2008, reports in no less than three separate articles on the importance of design and style for everyday products from computers to hard drives and even storage containers.

Here are some examples from a front page article titled, “PCs Take a Stylish Turn in Bid to Rival Apple”:

Additional articles the same day point to the importance of design and style. For example, the article “Can a Hard Drive Make a Fashion Statement” states that Seagate “kicked off a new strategy at the 2007 Consumer Electronics Show, offering drives with sleek shapes and lights to woo users accustomed to iPod-like elegance.” And in another article titled, “The Struggle to Contain Ourselves,” about the briskly growing $6 billion storage and organization industry where “style is increasingly important” and “once just plastic bins in industrial blue or clear, specialized storage products are now available for most conceivable uses in an array of material, from bamboo to faux leather to sea grass.”

While certainly consumer products are different than information products provided by EA, there is clear understanding now that design, fashion, style, and innovation are critical in reaching out to people, getting them interested in your products (consumer or information), and that design demands a premium in the marketplace. As the Intel anthropologist stated “why does this have to be so ugly?” Similarly, I would ask why do traditional EA products have to so often be so ugly, difficult to understand and apply. Let’s transition the way we do architecture to User-centric EA and design innovative information products that capture our users’ attention, really “talk to them,” clearly identify problem areas, propose alternative solutions, and lead to better decision making. Our executives are busy people with challenging jobs. We owe it to them to provide information in User-centric EA ways.