In every generation, “they come against us.”

But the Holy One Blessed Be He watches over his children.

He neither slumbers nor sleeps.

When the wicked arise in arrogance and evil to hurt us, we must turn to the One Above.

Only He directs the course of the world.

Only He determines who will succeed and who will fail.

The evildoers plot their sinister ways.

But G-d sees and hears, and will disturb their evil intentions.

G-d, my soul crieth out to you in the times of my trouble and affliction.

My mouth begs you for your mercy and your just and swift hand.

Please G-d intervene and thwart the evil plans of those that hate you and your children and seek them harm.

Vanguish our enemies and let your faithful servants prevail.

Make G-d turn his fiery and his sword on the enemies of His children.

May He exact ultimate vengeance and bring great discomfort, torment, and travail upon those with evil intentions and doings.

L-rd hear my cries, and swoop down from your Heavenly palace and save your people.

And the evil will be eradicated and the L-rd will bring final justice. 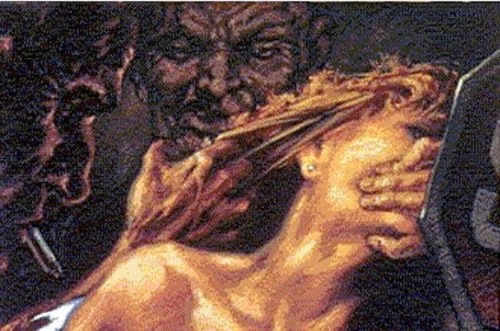 On the Night of December 16–coming home from watching a movie at the New Delhi Mall, a 23-year old woman was savagely gang-raped and her male companion, who tried to defend her, was beaten while on a bus being driven around the Indian capital for 45 minutes!

I iust want to stand with those protesting against the barbarism of the people who brutally gang-raped, tortured, and grotesquely inserted a metal rod inside her, causing her such bodily damage that even a team of eight specialists at Mount Elizabeth Hospital in Singapore that specializes in multi-organ transplants, could not save her.

The woman had such severe internal injuries that most of her intestines had to be removed, and according to CBC News, she suffered from organ failure, a lung infection, as well as brain damage.

After the rape, torture, and beatings, the victims were stripped and thrown off the moving bus.

It is sick and evil that the driver not only stood idly by and did nothing to help her, but has been charged as well in the actual rape!

I am deeply saddened not only by the gang rape, but also according to the Daily Times that they happen with such frequency that they are “rarely [even] reported in the Indian press.”

This is another wake up call for people of good conscience to stand against those that commit evil and to not be silent in the face of such atrocities.

The cries of this woman, and other victims of violence like her, can be heard throughout the world.

She will not be forgotten, and to those savages may justice be done–in this world or the next by the all-mighty G-d who hears our prayers.

We were woken out of our sleep, by a blood-curdling cry.

I ran to the window to see what was going on, but the street seemed empty.

There was yelling mostly from what sounded like a young man–or boy.

He was saying things like “get away from me.”

That turned into “don’t hurt me.”

Which ended in “H~E~L~P!  Somebody call the police. He’s beating me…”

The police came quickly, yet we still heard the craziness.

“He abuses me. He beats me.” and then “He tried to throw me off the terrace.”

The boy was literally begging the police to take the man to jail.

He seemed completely traumatized–unreconcilable–and kept repeating himself again and again.

Until finally everything went abruptly silent and “the show was over,” but the impact lingered in the warm, humid air of the night.

People disagree, argue, and fight–they are only human; not every moment can be a “Leave It To Beaver” hour–loving and copasetic.

We all understand that the pace of life and stress gets to people and sometimes, they say and do things, they do not mean or intend–and some which they do, but that they are sorry for afterwards.

Again, people are “only human”–or as we learned in Jewish day school, there are no angels here on this earth.

But the blood curdling cries we heard last night, left us up, sitting and holding each other–and trying to make sense of it all.

As a child, I learned that the prayers of the community rise up together to beseech G-d almighty for his mercy and blessing.

Sometimes, I wonder, whether the cries of anguish of the people who are hungry, sick, raped, and abused, also rise up in the same way–as one “communal” single cry for help or more as a chorus of people in need.

In the dark, at night, everything somehow seems worse, and while I tried to explain to the kids what this world is about…sometimes, it is hard to understand or even attempt to explain.

Are these things tests, challenges, opportunities for growth, or punishments–only G-d really knows.

But hearing (and seeing) people “losing it”–and their pain that you can hear mostly only in the dark of night–can put doubts and fears about the cruelty of some human beings into any soul.

These are memories that etch into our very consciousness–scaring and maiming, but hopefully also leaving us to appreciate every peaceful and loving moment bestowed on us.