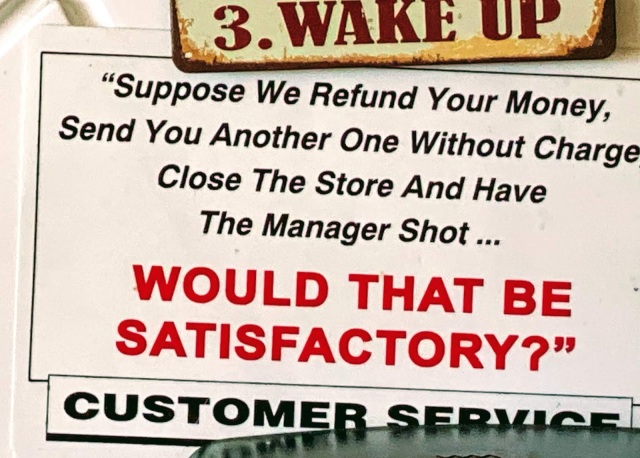 This was a sign that talks to a real customer service orientation:

“Suppose we refund your money.

Send you another one without charge.

And have the manager shot…

Would that be satisfactory?”

Actually no, that’s not good enough!

While you’re at it…

Bow down and kiss my filthy feet.

Flagellate yourself with 40 lashes using a wet noodle.

Give me a complimentary supply of whatever the crap is I was buying for life.

And after you shoot the manager, hang him from the tallest tree for everyone to get the message.  LOL

There is an inspirational essay by Elbert Hubbard written in 1899 called “A Message to Garcia” that is about taking initiative and getting the job done.

Here is an abstract:

“When war broke out between Spain and the United States, it was necessary to communicate quickly with the leader of the insurgents. Garcia was somewhere in the mountains of Cuba—no one knew where…the President must secure his co-operation, and quickly…Rowan was sent for and given a letter to be delivered to Garcia…[he] strapped it over his heart…landed by night off the coast of Cuba…disappeared into the jungle, and in three weeks came out the other side of the Island having traversed a hostile country on foot, and delivered his letter to Garcia.”

Garcia is held up by Hubbard as an iconic worker who can “act promptly, concentrate their energies: do the thing.”

And the right way for a worker to perform, according to Hubbard (in my words) included:

– Attention and care to the job

– Cheerfulness (or a good attitude)

– Integrity to carry out their work with or without supervision

Elbert Hubbard emphasizes a strong work ethic that can be best summarized when he states:

“My heart goes out to the man who does his work when the ‘boss’ is way, as well as when he is at home [interesting that this was written before modern telework!]. And the man who when given a letter for Garcia, quietly takes the missive, without asking any questions, and with no lurking intention of chucking it into the nearest sewer, or of doing aught else but deliver it.”

Hubbard’s essay sold over 40 million copies and was translated into 37 languages. It was also made into two movies. The message of Garcia as a model employee obviously resonates far and wide.

Reading the essay, which is written in “Old English,” it was surprising to me that the management challenges we face today are the same ones that were apparently confronted already 100 years ago.

It seems that the search for great employees – meaning those who can generate results, are accountable for delivering value, and are customer-centric – is timeless!

“A Message for Garcia” is truly a call to action for all. No matter what level on the career ladder we occupy, and no matter what organization we serve, what we do for our jobs does matter. Let us “own it” and own it well, just as if we were delivering the President’s message to Garcia.

Employees need to be motivated to perform. No, not just with money, and not even with a pat of the back (although both can go a long way to demonstrate appreciation for a job well done).

People need to know that their efforts have meaning and effect—i.e. that they are not in vain. This can have some of the biggest impact of all on motivating behavior, because people inherently want to be productive human beings and for their life to have some ultimate significance. This concept was best portrayed by Victor Frankl, the Holocaust survivor who wrote In Search of Meaning, and it is the basis of logotherapy, which has been shown to help sufferers of terminal illnesses better cope with the remainder of their lives.

When people at work feel that they have no chance to succeed, they may cease to find meaning in their efforts. This can lead them to decrease their engagement at work instead of going all out to prove themselves. As the Wall Street Journal noted in a recent article, this is what happens when golfers compete with extremely superior rivals like Tiger Woods, and they just “cave.”

Why this de-motivational reaction from people who care about doing their best?

From an IT perspective, this is like an Integrated Definition Function Model (IDEF 0) that examines input, process, output, and outcome: When loss is viewed as a predestined outcome, the process is seen as meaningless, and the input therefore as wasted. In the face of meaninglessness, people recoil to save their energy for something they feel that they can really have a shot at, rather than invest in something that they see as going nowhere.

If the above is true, then, why do some people “fight to the death” when their “backs are against the wall”?

My grandfather used to say, “Where there is life, there is hope.” Some people are able to confront what seem like insurmountable obstacles, and fight their way forward anyway.

This is the core theme of the “Rocky” character and the incredible success of the movie series. In every movie, Rocky represents the determination to succeed against all odds.

I believe that the essence of life is the search for an opportunity to make a meaningful difference, and when one is able to make a difference, that is inherently motivating. (And so of course, the opposite is true.)

So if you are a leader, and your employees are demoralized, how can you engage them so that they feel like their work makes a real and significant difference? Here are ways that work:

As a leader, what better way to motivate and drive personal and organizational success then to provide genuine opportunity to contribute of ourselves in a meaningful way, in a way where our efforts have an impact, are valued and valuable, and where everyone can succeed.

To be a great leader, you have to have the qualities that make others want to be led by you. Obviously, a leader without followers can’t lead anything.

A classic article in Harvard Business Review called “Why should Anyone Be Led By You?” by Goffee and Jones starts this way: “If you want to silence a room of executives try this small trick. Ask them, ‘why would anyone want to be led by you?’”…without fail, the response is a sudden hush. All you can hear are knees knocking.”

It’s humorous, but also right on. There are lots of people out there who are appointed, anointed, or otherwise advanced to positions of responsibility over others, but this does not make them leaders. To be a leader, a person must not ‘rule’ by authority alone, but by their ability to move people and organizations to greatness.

Most people say that what makes a leader is vision. And yes that is a vital trait, but there is a lot more—here are some others that differentiate the real leaders from the frauds:

· Wisdom—having the knowledge as well as ability to apply it to the specific situation. A leader knows what to do and when to do it. There is an implication of timely and relevant action. Finally, wisdom implies openness to new ideas and ways of doing things—innovation—and the customer-centric application of those.

· Integrity—a leader is reasonable, upright and equitable in his dealing with others. In contrast, corruption, dishonesty, greed, and nepotism undermine the very fabric of leading by example and preclude the possibility of creating a better world. Following a leader with integrity of being and of purpose is inherently meaningful and just.

· Compassion—some people call it empathy, but it is really more than just feeling for others, it is feeling altogether. It includes having the passion and determination to help the people and the organization innovate, modernize, and transform while being sensitive and responsive to all stakeholders affected.

· Humaneness—a leader is human being subject to frailties and failures, and is not to be confused with G-d (although some seem to think themselves almost nothing short of divine). Understanding that we all have weakness and vulnerabilities is critical to accepting risks, mistakes, and learning from these and growing past them. While we should demand and strive for excellence, we cannot expect perfection at every turn.

· Harmony—leading people means creating harmony between competing and conflicting people and points of view, so the organization can move forward in unity of purpose and the strength the comes with it. Often the biggest obstacle to success is not the competition, but the division or fighting from within. A leader brings people together and synergizes them so that the whole is greater than the sum of the parts.

· Communication—While people are sensitive to non-verbal cues, they are not telepathic, so clear, consistent, and compelling communication is essential to building the common vision and action plans to achieve the goals set out upon. A gifted, articulate leader can move people to action with urgency, purpose, and undying belief that neither reward nor retribution alone could rouse.

A leader with these six traits does not need to worry next time someone asks them “why should anyone be led by you?” The answer for them is clear.