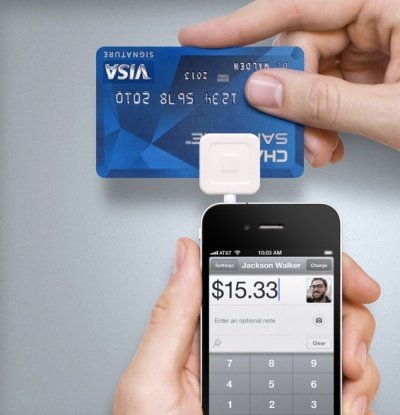 I just love all the new plug ins for the iPhone–maximizing it’s use as a powerful handheld computer.
Whether it’s attachments for talking fingerprints and iris scans (from MORIS–that I wrote about in a prior blog) to running credit card payments (from Square), the iPhone has amazing versatility and almost endless practical use–as we are all coming to learn and enjoy.
With Square, the simple credit card reader plugs right in to the headphone jack.
Then by simply launching the app, users are ables to run payments through just as any professional business would.
Simply type in the dollar amount, sign with a finger, send a receipt via email, and even display the GPS of where the charge was made–all done by mobile device and wirelessly.
According to BusinessWeek (10 Feb 2011), smart-phone card readers will process $11 billion in payments this year and this is projected to rise to $55 billion by 2015.
“Square charges merchants 2.75 percent of sales plus 15 cents per card swipe,” but in turn creates new opportunities to sell remotely and transact business seamlessly.
It is only a matter of time before hard currency becomes obsolete as electronic payments becomes easier and matter of course.
My pockets are already empty and I do not miss the greenbacks–bits and bytes registering securely in the bank are more than fine by me.
Next up as for attachments to the iPhone–medical scanners (the possibilities are endless, but some examples could be for diabetes metering, X-rays, and much more.)

2.     Money—someone(s) is invested in the status quo (for example, could it be that oil companies stand to lose if we go with hybrid engines or alternative energy sources like solar, wind.).

3.     Politics—perhaps, those in power have constituents that will “yell and scream” or lobby if others seek a change that they are for one reason or another are opposed to (for example, those who are pro-choice will lobby vehemently when pro-lifers attempt to limit or regulate abortion).

Note: I am NOT advocating for or against any of these positions, just providing a contextual explanation.

However, as a CIO or other leader (and this can be an official leadership position or one that is taken on by strategic thinkers, enthusiasts, and so on), I am convinced that we must call for change and help change along when “its time has come”—that is when the following conditions exist:

2)    Support to the people affected can be adequately provided for

3)     It is unequivocal that society will universally benefit and the change is fair and ethical. (Yes, the last one is hard to demonstrate and may be considered somewhat objective, but the concept of having “justifiable” change is important.)

Here is an example of an interesting change being called for by David Wolman in Wired Magazine, June 2009 that clearly demonstrates how these three criteria for leaders to evoke change works:

Wolman address the cost and by inference the benefits of change (#3 above): We “create hundreds of billions of dollars worth of new bills and coins every year…the cost to the taxpayers in 2008 alone was $848 million, more than two-thirds of which was spent minting coins that many people regards as a nuisance. (The process alone used u more than 14,823 tons of zinc, 23,879 tons of copper, and 2,514 tons of nickel.) In an era when books, movies, music, and newsprint are transmuting from atoms to bits, money remains irritatingly analog, carbon-intensive, expensive medium of exchange. Let’s dump it.”

Then Wolman demonstrates that  time for change is ripe   (#1 above): We have all sorts of digital money these days, such as credit cards, debit cards, e-checks, automatic bank deposits/payments, electronic transfers, and online payments. “Markets are already moving that way. Between 2003 and 2006, noncash payment in the US increased 4.6 percent annually, while the percentage of payment made using checks dropped 13.2 percent. Two years ago, card based payment exceeded paper-based ones—case checks, food stamps—for the first time. Nearly 15 percent of all US online commerce goes through PayPal. Smartcard technologies like EagleCash and FreedomPay allow military personnel and college students to ignore paper money….the infrastructure didn’t exist back then. But today that network is in place. In fact, it’s already in your pocket. ‘The cell phone is the best point of sale terminal ever’ Says Mark Pickens.”

Finally, Wolman shows that we can support people through this change (#2 above): “Opponents used to argue that killing cash would hurt low-income workers—for instance, by eliminating cash tips. But a modest increase in the minimum wage would offset that loss; government savings from not printing money could go toward lower taxes for employers. And let’s not forget the transaction costs of paper currency, especially for the poor. If you’re less well off, check cashing fees and 10-mile bus rides to make payments or purchases are not trivial…”

Whether or not it is “Time to Cash Out” of paper money as Wolman calls for (i.e. this is just an example to show how the criteria for change can be used), the need for leaders to move us towards and guide us through change is at the essence of leadership itself. Change should not be taken lightly, but should be evaluated for timeliness, supportability, and justifiability.