This crazy water faucet in Florida has no sink basin.

Where does the water go? 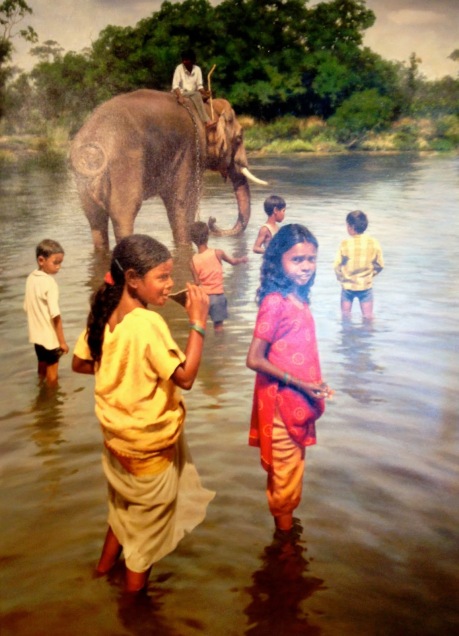 So we watched the movie “Sold.”

It was about this young Nepalese girl (maybe age 12) who was sold into a horrible brothel in Kolkata, India.

She fought to keep from getting raped, but eventually they drugged her and tied her hands to the bedpost–where the evil bastards had their way with this child.

She and the other young girls in the brothel were raped about 10 times every evening to “repay their debts.”

The horror these children go through taken, beaten, drugged, and raped over and over again.

It’s unthinkable and the lowest grotesqueness of people who could possibly treat children this way.

Finally, the young girl does manage to escape to Hope House (a rescue shelter for the human trafficking victims) and with the information she provides, the police are able to raid the brothel and rescue the other children.

The movie tells how their are 5.5 million children around the world that are being sex trafficked–and I would presume that the real number is unfortunately much higher!

I can only imagine how G-d must cry heavenly tears for these poor children.

It is incredibly hard to understand that in some areas of the world poverty is so bad that some desperate families actually feel they have to resort to selling their children to survive.

In other cases, the children are preyed on and simply disappear.

Children who should be playing with toys are instead forced to be sexual play things.

Innocent children who should be treated with love and care are instead treated as animals for the sick and cruel physical pleasures of others.

Have mercy on these children—save these children from wherever they are bound and held–give them back their freedom and their dignity.

If ever there was a cause for people to rally around–surely, saving these children from sexual abuse and trafficking is one that all can agree is at the crux of our very humanity and mankind’s soul.

Coming out of the mall into the parking lot, I saw this poster lying on the ground.

It was a flyer to help find a missing child.

Every time, I see something like this, I just have to take a big gulp and deep breath, as this seems like one of the scariest things that can happen to a child and their parents.

A child is dependent on it’s parents, and when they go missing G-d forbid, the fear of in whose hands they might fall and what may be done to them is unthinkable.

The goal is to get the word and pictures out to find the child as quickly as possible.

About 1 in 5 runaways are considered likely victims of child sex trafficking.

A 1997 study showed only 5% of non-family abductions even get reported to police and entered in the FBI’s National Crime Information Center (NCIC)–many may not enter a report when a child is gone just a few days or it may get filed under other categories like homicides or sexual assaults.

In the 1972 and 1981, there were tragic cases of missing children Etan Patz and Adam Walsh, both killed at age 6, with Etan’s remains supposedly thrown in the garbage in Soho (he was never found) and Adam’s located in a drainage canal in Florida.

Etan was the first missing child whose pictures were put on the back of milk carton.

In 1983, the anniversary of Etan’s disappearance, May 25, was designated National Missing Children’s Day.

In 1984, the Walshes and other child advocates established the National Center for Missing and Exploited Children (NCMEC) “to help find missing children and prevent child victimization”–shockingly before this there was no coordinated federal and state mechanism for search efforts.

In 1996, America’s Missing Broadcast Emergency Response (AMBER) was set up as a a child abduction emergency alert system; it was named after Amber Hagerman, a 9-year old abducted and murdered in Texas.

My heart goes out to these children and their families!

Anything that each of us can do to help with the desperate situation of missing children and their safe recovery is worth not only our attention, but our utmost vigilance and helpful tips. 😉

As so many of you app users know, Snapchat allows you to send texts, drawings, photos, and videos, but with privacy, knowing they will disappear in a few seconds.

Disappearing messages is certainly not a new idea–in spycraft or for kids.

Remember the disappearing ink (or maybe you’ve forgotten because it disappeared)?

Someone apparently stole the disappearing ink right out of the packaging in the store–it has truly disappeared. 😉