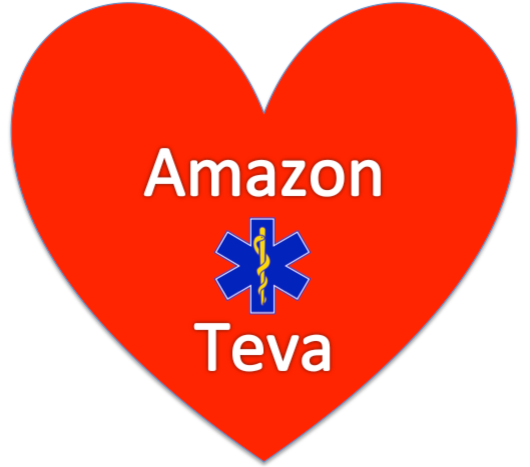 Amazon has upended so many industries–and you can basically buy almost anything there.

And yes, what you can’t buy today, you will be able to buy tomorrow.

What started as books and DVDs is now virtually synonymous with e-Commerce itself!

Next up for Amazon is pharmaceuticals!

Some people may think that Whole Foods gives Amazon the footprint it needs to sell these and dominate.

But what people aren’t considering is that Amazon can sell the pharmaceuticals online.

Amazon can do what other online drug distributors can’t.

Because Amazon has the most unbelievable distribution network in the world.

Currently, people can order drugs through the mail, but these tend to be for regular reoccurring prescriptions that have lead time.

However, Amazon can outdo these mail order pharma companies, because they can get you the drugs you need when and where you need it.

– You don’t feel well and can’t make it to CVS, Amazon will deliver to your door.

– Plus do all your shopping together in one fell timesaving swoop.

Amazon the low cost, efficient online seller of everything to everywhere is going to partner with Teva Pharmaceuticals, the #1 world leader in low cost generic drugs.

Teva already produces 120 billion tablets and capsules every year, operates in 80 countries, and currently fills 1 in 6 generic prescriptions in the U.S.

Together, Amazon and Teva can make beautiful music, that is medicine + money!

Who needs CVS when pharmaceuticals perhaps soon can be gotten at Whole Foods or at your Trusty Amazon.com.

One more time, I see some radical disruption–and this time it will bring you cheaper and more convenient drugs–make a l’chaim to your health. 😉

(Endnote: I am a big fan + investor in Teva, and of course, all opinions here are my own.)

I thought this picture was sort of humorous.

This lady is walking down the street with this big green umbrella, but there is NOT a cloud in the sky.

In fact, you can see in the upper right that it is a beautiful and clear sunny day.

Also, where she is walking, it is clearly shady and cool–so the umbrella is not needed as a sun screen either.

From a technology annoyance perspective, it is long past time to invent something more creative than a cheap, crappy umbrella–like from Charlie Chaplin and The Umbrella–to protect us from elements.

Someone, please come up with a push-button protective bubble that envelops us–clear for visibility, of course–and keeps us dry and temperate.

A beautiful, futuristic clear dome over the city would be nice too, but probably cost prohibitive and not as adjustable for each indiividual and their respective needs.

SHIFT HAPPENS (a.k.a. “Did You Know?”) are a series of terrific videos that illuminate the amazing times of social and technological change we are living in.
(This is one of the videos)
We are fortunate to be alive today!
But we must be aware of all the change happening around us and PREPARE ourselves for a very different future.
Some interesting tidbits from this video that should make you think:
– China will soon be the #1 English-speaking country in the world.
– The 25% of India’s population with the highest IQs is greater than the TOTAL population of the U.S.
– The top 10 in-demand jobs in 2010, did NOT exist in 2004.
– Today’s learners will have 10-14 jobs by the age of 38!
– 1 in 4 workers have been in their jobs LESS THAN a year.
– We are currently preparing students for jobs that don’t yet exist, using technologies that haven’t been invented yet, in order to solve problems we don’t even know are problems yet.
– The number of text messages sent and received every day exceeds the TOTAL population of the planet.
– There are 31 billion searches on google every MONTH.
– 4 EXABYTES of unique information will be generated this year.
– A weeks worth of the New York Times contains more information than a person was likely to come across in a LIFETIME in the 18th century.
– By 2049 a $1000 computer will exceed the computational capabilities of the ENTIRE human species.
All in all, the world is shifting eastward, jobs are becoming more tenuous, information is EXPLODING, and technology is SURPASSING all known boundaries.
What will the world be like in 2, 5, 10, 20, 50 years? Marvelous to be sure!
But are we prepared for all the change is that is coming LIGHT SPEED at us?
Are we getting out in front of it–can we?
It strikes me that either we harness the POWER of all the change or else we risk being OVERCOME by it.
Shift happens, YES–These are great and challenging times for us to manage to and an awesome RESPONSIBILITY.

The Wall Street Journal this week (17 February 2011) had a scary and thought-provoking editorial called “Is Your Job an Endangered Species.”

The thesis is that “Technology is eating jobs—and not just obvious ones like toll takers and phone operators. Lawyers and doctors are at risk as well.”

The notion is that while technology creates opportunities for some, it is a major threat to many others.

The opinion piece says to “forget blue-collar and white-collar-workers.” Rather, think in terms of workers who are either “creators” or “servers”.

Creators—these are the innovators: programmers, researchers, and engineers. They are “the ones driving productivity—writing code, designing chips, creating drugs, and running search engines.”

Servers—these are jobs to service the creators: “building homes, providing food, offering legal advice,” etc. These jobs are ripe “to be replaced by machines, by computers, and by how business operates.”

These two categories of labor are similarly portrayed in the movie I. Robot with a vision of society by 2035 that has engineers (“creators”) from U.S. Robotics building robots and then masses of robots walking around side by side with people and performing everyday tasks from the delivering packages to caring for the sick (“servers”).

With manufacturing jobs continuing to move overseas to the “lowest price bidder” and service-based jobs at risk as we continue to make advances in robotics and artificial intelligence, there are a number of important questions that will challenge us:

1) Are the Creator jobs (augmented by the left-over service jobs that don’t go to robots or AI) enough to keep our population fully or even near fully employed?

2) Can almost everyone (no matter what their intellectual capability and curiosity) be expected to perform in the functional job category of creators?

3) Can we transition the preponderance of our society to be engineers and programmers and scientists and inventors—especially given our challenges in science, technology, engineering and math (STEM), and is this even desirable?

According to the WSJ editorial, there are a few givens:

– Momentous change in the job market is upon us: “Like it or not we are at the beginning of a decades-long trend” in changing employment prospects.

– Jobs are going to be destroyed: “There is no quick fix for job creation when so much technology-driven job destruction is taking place.”

– New jobs will be created: “History shows that labor-saving machines haven’t decreased overall employment even when they have made certain jobs obsolete.”

One of the major problems with the rapid pace of the technology boom we are experiencing is that job market has not had time to adjust—and the “legacy” labor supply is out of equilibrium with the emerging market demands.

Therefore, until new jobs and the associated education and training catch up to meet the demands of a changing society, we are going to suffer severe job dislocation and unemployment that will be enormously painful for many years yet to come.

In terms of what the gamut of new jobs will end up being in our society, surely it will involve areas of critical need such as energy independence, ongoing medical breakthroughs, necessary security advances, high-speed transportation, and so much more.

In all cases though, we can expect that those workers that bring innovation and modern technical skills “to the table” will have the distinct advantage over those that cling to jobs past their technological prime.

Digital natives will have the advantage here; digital immigrants need to adjust to the seismic shift to the employment landscape that is still only just beginning.

>When companies get cozy, the marketplace gets innovative and from out of nowhere…a disruptive technology upends things.

We’ve seen this happen countless of times in big ways.

In the auto industry, 50 years ago neither GM nor Ford would have ever dreamed that they would lose their virtual monopoly on the U.S. auto industry to foreign car companies that would dislodge them with compact vehicles and hybrid engine technologies.

More recently in the music industry, Apple seized the day by combining functionality, stylishness and price on their iPod player with an accessible online iTunes music store.

More generally, the whole world of e-Commerce has stolen much of the show from the brick and mortar retail outlets with internet marketing, online transaction processing, supply chain management and electronic funds transfer.

Now, another disruption is occurring in the computer market. For years, the computer industry has made every effort to provide more raw computing power, memory, and functionality with every release of their computers. And Moore’s law encapsulated this focus with predictions of doubling every two years.

Now, on the scene comes the Netbook—a simpler, less powerful, less capable computing device that is taking off. Yes, this isn’t the first time that we’ve had a drive toward smaller, sleeker devices (phones, computers, and so on), but usually the functionality is still growing or at the very least staying the same. But with Netbooks smaller truly does mean less capable.

How did we get here?

“For years now, without anyone really noticing, the PC industry has functioned like a car company selling SUVs: It pushed absurdly powerful machines because the profit margins were high, which customers lapped up the fantasy that they could go off-roading, even though they never did.”

“What netbook makers have done is turn back the clock: Their machine perform the way laptops did four years ago. And it turns out that four years ago (more or less) is plenty.”

“It turns out that about 95%…can be accomplished through a browser…Our most common tasks—email, Web surfing, watching streaming videos—require very little processing power.”

The netbook manufactures have disrupted the computer market by recognizing two important things:

Foreign companies are running away with the Netbook market. “By the end of 2008, Asustek had sold 5 million netooks, and other brands together had sold 10 million…In a single year, netbooks had become 7 percent of the world’s entire laptop market. Next year it will be 12%.”

“And when Asustek released the Eee notbook, big firms like Dell, HP, and Apple did nothing for months.” They were taken off guard by miscalculation and complacency.

Of course, the big boys of computing are hoping that the netbook will be a “secondary buy—the little mobile thing you get after you already own a normal size laptop. But it’s also possible, that the next time your replacing an aging laptop, you’ll walk away into the store and wonder, ‘why exactly am I paying so much for a machine that I use for nothing but email and the Web?’ And Microsoft and Intel and Dell and HO and Lenovo will die a little bit inside that day.”

The important future value add from the Office of CIO is in IT strategy, planning, governance, and mission-focused solutions. We need CIOs that are true leaders, innovative, and focused on the business and not just on the technology.

User-centric EA plans for the future of the enterprise and is on the lookout for both incremental innovation as well as disruptive technologies.


How does EA plan for innovation, whether incremental or those that are revolutionary and disruptive?


EA is at the forefront in facilitating innovation—continuously scanning for innovations to bring into the target architecture, conducting regular outreach and market research to synthesize business and technology information, building a useful framework for the EA information, and vetting and phasing in change in consumable chunks by the organization.