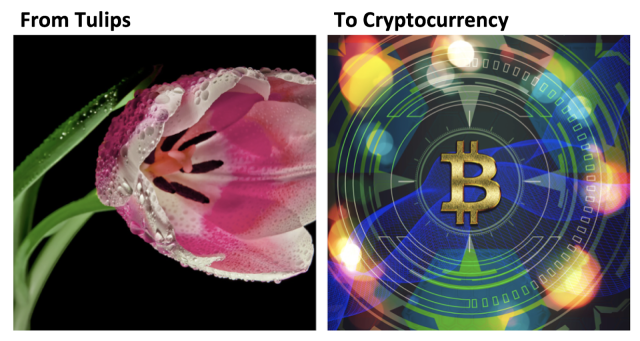 There always seem to be another mania.

From the Tulips Mania in 1637, when a tulip went for more than 10x what a skilled workman earned in an entire year!

In between, we had the gold rush, the great depression, the tech/dot-com bubble, and the housing/mortgage crisis, and many more I am sure.

There seems to always be something for people to get excited about in an “irrational exuberance” type of way, as former Federal Reserve Chair, Alan Greenspan put it.

Is it boredom, big dreams, unadulterated greed, the desire to “get rich quick” and easy, the belief that you’ve discovered the Holy Grail or is it just people being stupid.

Either way, we have a way of getting ourselves in trouble, some “losing their shirts.”

Not sure who said it, but there isn’t an easy fix to your life.

There are small and big problems, and then there is you trying to fix them (with G-d’s help).

As to bitcoins and tulips, they ain’t worth what you think they are. 😉

Recently, I heard a colleague say that we should view IT not as a cost center, but as a resource center—and I really liked that.

In fact, IT is a cost center and a resource center, but these days there is an overemphasis on it being a cost center.

On the negative side, people seem to like to criticize IT and point out the spectacular failures there have been, and in fact, according to Public CIO “a recent study by the Standish Group showed that 82% of all IT project were either failures or were considered challenged.”

This is the dark side of IT that many would like to dwell on.

However, I would argue that while we must constantly improve on IT project delivery, IT failures can be just a point in time on the way to tremendous success and there are many of these IT successes that we benefit from in big and small ways every day.

Moreover, it may take 1000 failures to achieve that one great breakthrough success. That is the nature of innovation and experimentation.

Of course, that does not mean we should do stupid or negligent things that results in failed IT projects—we must do our best to be responsible and professional stewards. But, we should not be afraid to experiment and fail as a healthy part of the creative process.

So why are we obsessed with IT failures these days?

Before the dot com bust, when technology was all the rave, and we enjoyed the bounty of new technologies like the computer, cell phones, handhelds, electronics galore, the Internet and all the email, productivity software and e-commerce and business applications you could ask for, the mindset was “technology is the engine that drives business.” And in fact, many companies were even changing their names to have “.com” in them to reflect this. The thinking was that if you didn’t realize the power and game-changing nature of technology, you could just as well plan to be out of business in the near future. The technologies that came out of those years were amazing and you and I rely on these every day.

Then after the dot-com burst, the pendulum swung the other way—big time! IT became an over zealous function, that was viewed as unstructured and rampant, with runaway costs that had to be contained. People were disappointed with the perceived broken promises and failed projects that IT caused, and IT people were pejoratively labeled geeks or techies and viewed as being outside the norm—sort of the societal flunkies who started businesses out of home garages. People found IT projects failures were everywhere. The corporate mindset changed to “business drives technology.”

Now, I agree that business drives technology in terms of requirements coming from the business and technology providing solutions to it and enabling it. But technology is also an engine for growth, a value creator, and a competitive advantage!

Further, while some would argue these days that IT is “just a tool”, I would counter that IT is a true strategic asset to those who understand its role in the enterprise. I love IT and I believe we all do and this is supported by the fact that we have become basically insatiable for IT. Forrester predicts U.S. IT budgets in 2009 will be in the vicinity of $750 billion. (http://it.tmcnet.com/topics/it/articles/59200-it-market-us-decline-51-percent-2009-researchers.htm) Think about what you want for the holidays—does it have IT in it?

A recent article in the Wall Street Journal was about how the homeless are so tied to technology that many have a computer with Internet access, even when they don’t have three square meals a day or a proper home to live in.

Another sign of how critical IT has become is that we recently stood up a new Cyber Command to protect our defense IT establishment. We are reliant indeed on our information technology and we had better be prepared to protect and defend it.

It’s time for the pendulum to swing back in the other direction and to view IT as the true strategic asset that it is.