Proven on the battlefield on land, sea, air, and space.

Defending the Holy Land and other countries around the globe.

In the fight of good over evil, I’m proud that Elbit is one of the good guys! 😉

The element of surprise can overcome most defenses. This can happen whether through an insider threat or through new and stealthy technologies. Already in August 2018, two explosive-laden drones were used to attack the president of Venezuela, Nicolas Maduro. Similarly, last year, in the movie, Angel Has Fallen, we saw the president of the United States attacked by a swarm of drones. While this is a great threat in and of itself, I believe that the greater threat lies in the miniaturization of the drones, in some cases, drones with the size, shape, and function of insects.

Unfortunately, Yigal Amir used the element of surprise to assassinate the prime minister of Israel. Now there are other high-tech threats like miniaturized, weaponized drones. There is no excuse for us not to be on the lookout for and to be prepared to defend against these, so that our leadership and our democracies are duly protected. Surprise is a big advantage in warfare, but we must be one step ahead, so that we are prepared to defend against these as well as to turn the tables and effectively employ the continued element of surprise against our relentless adversaries. 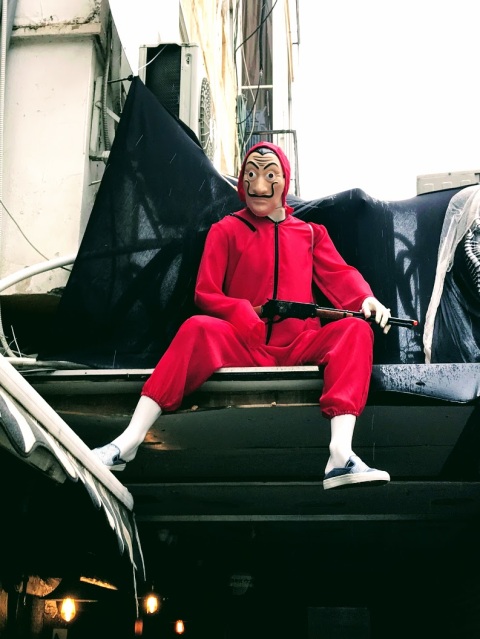 Another bloody weekend…this time in El Paso and Dayton.

With at least 29 dead and 53 injured in mass shootings.

We still don’t seem to be able to get a state of security in our country.

Whether it’s gangs and violence in our decaying cities (yes, like Baltimore).

Or mass shootings by racists and nut jobs attacking our schools, houses of worship, shopping malls, and places of work.

People can buy assault rifles with mega mags of ammunition and go crazy.

While I was impressed with the response in Dayton especially, they killed the perpetrator within 30 seconds of the start to his killing spree, in other cases it takes considerably longer,

Moreover, while generally the first responders are brave and heroic in going after and taking out the bad guys, in places like the Parkland shooting, the officer apparently hid behind a tree while the students got massacred.

We need a rethinking of how we deal with these terror situations.

Can technology help (and I know these may sound crazy, but we have to think out-of-the-box at some point)?

We have the ShotSpotter technology to pinpoint where shootings are occurring.

Why can’t we have persistent armed drones on patrol with AI ready to swoop in (even through an open door or window) and respond and neutralize the shooter (while law enforcement makes their way through our busy city streets).

Other ideas…embedded chips in humans (yes, it is coming) that would drive the privacy wonks nuts, but can identify occurrences of extreme violence and potentially stop it.

I am sure there are other technology ideas out there.

Certainly, we do need to balance privacy with safety, and it will be tricky to make sure the AI is getting it right, but as we figure this out, tragically there are fathers, mothers, children not coming home because they are dead.  😉

Please see my new article in The Times of Israel called “Using Drones to Stop Terror Balloons and Kites.“

It is not hard to imagine Israel developing drones that can effectively deal with the terror balloons and kites. If a drone, can hover for extended periods overhead, go on GPS or remote-controlled operational missions, and can even be used to “take out” terrorist targets or other drones, then certainly they can intercept, capture, redirect, or destroy the flaming balloons and kites that the terrorists are sending to kill and destroy.

Israel and the IDF not only have the fundamental technical and scientific knowhow with both drones and missile defense, but also they have the motivation, with G-d’s help, to save the lives of the Israeli people as well as the beautiful and holy land of Israel. 😉

Had some fun driving around this cool little Robot in Rockville Town Center.

It’s funny people’s reactions when they see these.

They’re still not quite sure what to make of these.

Robots on the street.

Submersibles in the water.

Soon they will all be autonomous, ubiquitous, and essential.

And people will be the side attraction. 😉

Really liked this robot (Cubebot) in the store.

Love the colors and that you can change the pose in all different ways.

This robot is pretty darn cute!

It’s funny in this sitting position though.

Don’t just sit there, do something!

Probably not that long before robots will be all over the place.

We’ll wish for just a little privacy from the darn things, just like from our 24/7 computer gadgets that we can’t let go of now.

Yes, we’re hopelessly dependent on the technology–it’s so helpful and we love it, but we can’t turn it off.

They won’t be sitting for long.

Robots–big and small, alone and in swarms, male and female, strong and intricate, smart and simple, worker and homemaker, doer and helper, companion and lover, where will it stop–it won’t. 😉

This is one incredible video.

It shows the killing power of micro killer drones.

With a host of cameras and other sensors including facial recognition and GPS, plus a small amount of explosives, these drones can target individuals or critical infrastructure and take them out!

The drones can work alone or in swarms to get into and kill or destroy anything.

We can wipe out entire cities or the nuclear infrastructure of our enemies.

Despite the warning about artificial intelligence at the end of this video, rest assured these killer microdrones are coming.

Iran and North Korea are chasing obsolete technology to harm the U.S. and Israel, and within a short time, they will see the error of their malevolent ways

G-d foretells us all in the Bible and like David and Goliath–a slingshot to the forehead and the fight with the evil is over. 😉

(Thank you to Itzchak for sharing this video with me). 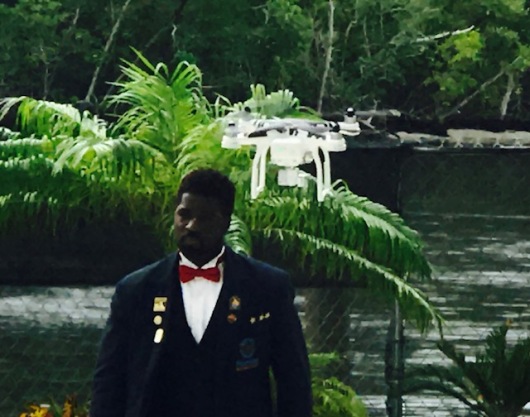 I took this photo of this man and drone in Florida.

Look how close this machine is flying to his head!

Aside from the surveillance capabilities and offsetting privacy issues, these are bringing some dangerous fighting capabilities anywhere and everywhere.

Just today, I read about how the U.S. shot down an armed Syrian drone–presumably made and deployed by Iran!

As drones and robots become better, faster, and cheaper and ubiquitous on the battlefield and on main street, who will be (relatively) safe anymore?

Unless of course, my drones are stronger than your drones!

It’s going to be a war of technology and machines more than ever before.

What was once human flesh against a steel blade, arrow, and then bullet is now going to be an superfast artificially intelligent, armed to the hilt “man of steel” (and they don’t miss) against just regular everyday people.

Don’t hurt your hand punching that Robot in the face. 😉 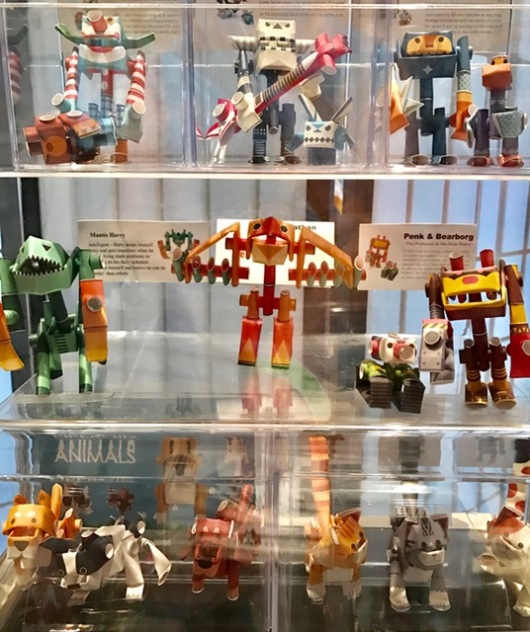 There are big deadly weapons to worry about, such as weapons of mass destruction that come on an ICBM or even in a suitcase bomb to frightening armies of massive killer robots.

And then there are small nanobot weapons to worry about–which don’t sound like much, but they could be the ultimate killer machines.

About 10 nanometers make up the width of a human hair, so we are talking about microscopic or bug size weaponized drones.

Nanobots can be manufactured or scarily can be self-replicating.

They can fly alone or in massive swarms.

They can surreptitiously enter/exit and carry out their missions virtually undetected.

Whether surveillance or delivering a mini-nuke or a toxin.

Nanobots could function like a biological weapon killing millions–targeted or indiscriminately.

Cambridge University forecasts a 5% chance that nanotech weapons could cause a human extinction level event by the year 2,100.

Soon wars will not be fought by people any longer–by rather by robots and nanobots.

People are too fragile for fighting and war against ruggedized and militarized bots that are designed for one purpose only…to kill, kill, kill.

Terminators are coming–from massive to nanoscale–and mere humans will be dogmeat to these killing machines.

Add in a cyber warfare component that will turn off 21st century civilization leaving us to fend as if we were back in the stone ages, and overpopulation is the last and funniest joke any of us will ever tell.

So it has always amazed me how until modern times, armies would line up and face-off on the battlefield to basically bash each others skulls in.

Whether in medieval times or in the civil war…it goes something like this.

– Red coats line up on this side.

– Blue coats line up on that side.

– Everyone pull out their weapons.

– Scream your bloody heads off.

– And run towards each other swinging.

– The last man standing from either side is the winning army!

How brilliant is that?

Basically, mass suicide for both sides (like trying to take the hill running straight into machine gun fire).

These days, there is a notion at least of using stealth, smart bombs, and sending in drones or robots, so as not to risk real people’s lives unnecessarily.

But I guess that takes the fun out of it–can’t slice and dice and smash the enemy with your bare hands.

Last weekend, I watched people who like to fight the old fashioned way, dress up in medieval gear, take their sides on the field in the park, and go at it.

They had swords, and clubs, and javelins, and bow and arrows, and more.

They even had roles, and one guy I talked to was actually the king for one side of the fight–and apparently you have to earn that role in battle and in council vote.

On the battlefield then the people get together and go at it hitting each other with some pretty scary weapons that fortunately are (mostly) padded, but still they seemed to get some pretty good zets!

Honestly, it sort of looked like a lot of fun and good exercise, but probably (more than) a little dangerous too.

I saw one combatant coming off the field, taking off his outfit as it was pretty hot out, and he literally had layers of shielding on, so aside from seeing them take hits again and again, I could see that they felt they needed the protection.

What was also interesting watching this–and I understand sometimes they get about 150 people on the field at a time to go at it–is that people seem to really want to go back in time to the way things were…more natural, more real, and even more deadly–up close and personal!

We are so much in a virtual world or like Elon Musk (CEO of SpaceX and Tesla) said living in a simulation, that there is just a wild yearning and craving to get back to nature, basics, and what’s tangible and real.

Even if it means bashing heads on a hot Summer’s day…and reenacting the times of lore…put your smartphones down and pull out your swords and clubs–it’s a new day and age. 😉