Unfortunately, this is why Congress does not get the respect it deserves.

Anti-Semites like Congressman Hank Johnson (Democrat-Georgia) are not only hateful and discriminatory, calling Israelis and Jews “termites.”

But Congressman Johnson actually questions whether Guam, an Island of 209 square miles (and U.S. territory in the Pacific with a strategic U.S. Naval Base), is going to “tip over and capsize” in the Ocean.

It seems like Johnson has a huge issue with termites in terms of both calling people disgusting and derogatory names and thinking an entire Island–almost twice the size of the city of Atlanta–is going to capsize, as if from a big problem of termites.

This just demonstrates how being hateful and dumb truly go together!

What a disgrace on our esteemed Congress of this great country of the United States of America.

No wonder the big problems of this country are not getting appropriately addressed and solved, there are too many people on the Hill infested with horrible hate in their hearts and minds. 😉 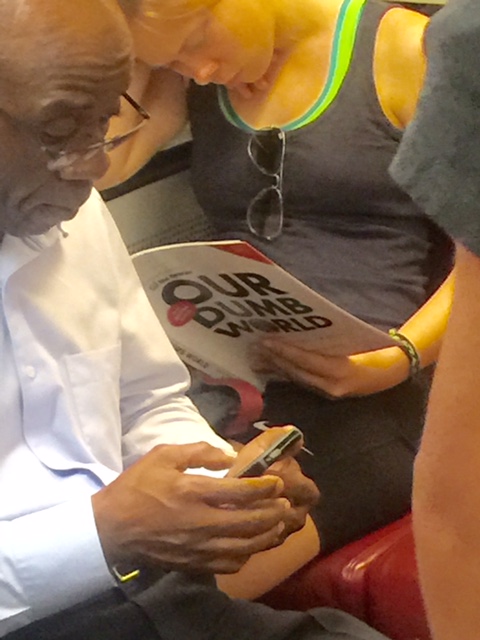 So I took this photo on the Metro in Washington, D.C.

One person is on their “smart” phone, and the other is reading a book called “Our Dumb World.”

This is a contrast supreme. and I was intrigued.

I couldn’t exactly ask what the man was doing on his smartphone… but presumably email, texting, news, a video, maybe even some gaming.

The other person reading about the dumb world–what’s that all about?

So I looked this book up, and apparently the satarists at The Onion make some laughing-stock fun in their “fake” atlas of the world.

So stupidity is out there every day…

But stupid isn’t the worst part of it…”stupid is as stupid does”– not sure you can blame someone for doing dumb things when they’re done innocently and by accident.

But what is really bad is when dumb things are done with intent and malice–for power or to get what you want when you want it.

Leadership often treats the masses as the dumb people who can be fooled some, if not all, of the time.

But people are smarter than you think, eventually seeing through the amalgam of lies, deceit, and spin–thrown at them through the old world media as well as in social media.

That type of dumb becomes a foolish legacy–not a laughing matter.

Real, ongoing passion and care for the people and the progress of our nation within the larger world context…we can see it in the eyes, hear it in the words, feel it in our bones–it’s tangible and it lifts us to achieve greatness.

Those things are smart–and what we need more of in the “real” world atlas. 😉