Please see my new article in The Times of Israel called, “Righting Wrongs To Sephardim.”

The initial waves of Aliyah beginning in 1882 were driven by the persecution and pogroms, and later the Holocaust, in Europe. Thus, Israeli society initially built up their institutions and power centers around these Ashkenazi pioneers. Immediately after 1948, when Sephardic refugees were expelled from the Arab countries en masse, Israel was overwhelmed with as immigration influx that virtually doubled the Jewish population in Israel in the first three years of its existence. Unfortunately, the newly arrived Sephardim were relegated to a substandard housing and economic situation, which then persisted for many decades.

In Jewish society, however, there is no room for ethnic discrimination and inequality, and the formation of a Sephardic political party in 1984 was a crucial milestone in Jewish social and economic justice. For almost 30 years, Shas was led by Rabbi Ovadia Yosef, the former Israel Chief Sephardic Rabbi and spiritual leader, and Shas has remained one of Israel’s top political parties.

Wanted to share this useful tool…it’s call My Reps.

And you can find out YOUR county, state, and federal government elected officials.

All you do is type in your zip code.

Get the names, address, telephone numbers, and even some emails for contacting your representatives about the issues you care about.

This is what democracy is all about.

Your officials represent you and they need to hear from you–let your voice be heard!

Great little app from the Center for Technology and Civic Life…thank you. 😉 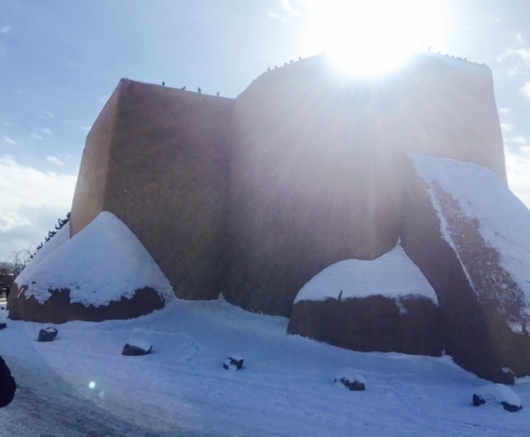 I was really surprised this week when the Pope entered the election fray and made a comment about presidential candidate, Donald Trump, not being a Christian if he is wanting to build walls (on the Mexican border) and not bridges.

And then the Trump campaign pointing out that the Vatican City is surrounded by what of all things…a very big wall!

We have a history in the U.S. of separation of Church and State and a First Amendment that codifies this as law.

To me, unless a candidate is truly criminal, discriminatory, or evil in their conduct, it’s not appropriate for a lofty religious figure to publicly question their personal faith like that.

Further, when it comes to immigration this is not just an issue in America, but all over Europe now with the refugee crisis, and in many other places in the world.

Of course, we most definitely need to welcome refugees fleeing persecution, conflict, catastrophe, or war.

But when immigration is principally an economic migration, this is something for each nation to debate and decide for what is best for them.

This is not an endorsement of any candidate or party, but rather an acknowledgement that we shouldn’t:

3) Throw stones in glass houses (or walled areas as the case may be).

If building bridges is what is promoted and preferred here then the Pope and Trump should kiss (proverbially-speaking that is) and make up. 😉

This is a photo I took in the Metro in Washington D.C.

It is an advertisement for a cessation of hostilities in Syria where estimates are over 100,000 people killed in civil war, so far.

Now in Egypt, you have about 1,000 killed in the overthrow of the Muslim Brotherhood and violence continues there as well.

What is really confusing is that in both cases you have terrorists and extremists fighting more secular societies–yet, we do not unequivocally support the secularists in their battle again Jihadists.

At the same time, we went to war for a decade in Iraq and Afghanistan to fight a “war on terror” and to this day it continues with somewhat regular drone attacks.

While I understand that as a Democracy we need to support fair and free elections, does this mean we have to buttress up fundamentalists, extremists, and terrorists–just because they got voted in.

Sometimes, people don’t know or understand what they are voting for until its too late, which seems to be what happened in Egypt when the people elected the Muslim Brotherhood.

Similarly, the Nazi party in Germany in the 1930’s won many seats in the Reichstag, and we know the ten of millions murdered and the destruction that this led to.

Democracy, does not mean good always prevails, but when evil is rightfully elected what are we to do–simply support free elections or support good over evil?

Perhaps, the notion of good and evil is a little simplistic (especially when neither side may be very good), but the idea is the same, are we fighting for free elections or the better candidate in terms of overall freedom, human rights, and world peace.

Can we really afford to straddle the fence here? 😉