Thought this was pretty cool at the Boca Museum of Art.

And all in bits and bytes.

They also had a display of black and white photos of the ocean waves.

But it was a little too sterile for me. 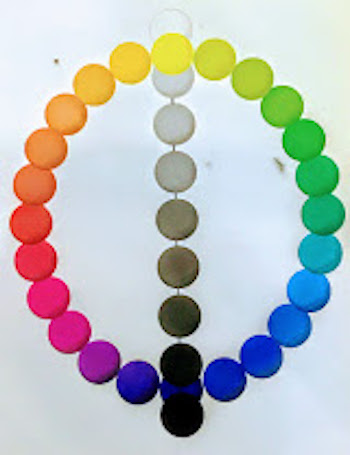 So we bought a new big screen television.

We brought it home from Costco.

And we gave our prior model away to a family member.

By the time we got back home and connected our new LG TV, oy vey what a disappointment.

It had this brilliant display in “test mode” that when hooked up to the cable box looked dark and worse than lackluster.

Even when fidgeting with the settings to offset the dark screen, the gorgeous test display mode still came out looking like crap in actual tv mode.

But the worst part was that there was a black line down the middle right of the screen.

When we looked it up on the Internet, it was a known error.

The instructions said to call LG and make a service appointment.

WTF!  To heck with this sh*tty TV–it’s supposed to be brand new and actually work–so it’s going back to Costco where this crappy product came from.

I dragged this widescreen TV back to the store and put it on one of their flat wide carts.

The problem was that the wheels on one side of the cart were busted, and it kept turning into the fence, store shelves, and wall.

When the lady behind the returns desk called me for my turn, I tried to push the cart and it wouldn’t move.

Not being able to budge this thing,  I gave it shove forward and the TV went flying from upright to horizontal–SMASH!

The lady behind the returns counter goes to me sarcastically:

“So what was wrong with it BEFORE you just knocked it over???”

Well to make a long story short, I returned the lousy LG television and got a refund.

And instead ordered a new Samsung curved TV from Amazon–hope this one works!

As for the horrible quality control of today’s electronics–it’s a shame that they can’t seem to make them without problems–they’ve only been making televisions for like 100 years or so.

In fact, we recently bought a Dell laptop and within like 5-6 weeks, the motherboard died.

As you can see, the vendors are wringing profits from the products they are making at the customer’s expense.

There is no quality control to speak of–instead be ready to return the junk electronics to the garbage vendors that make them. 😉

As we all know, our cybersecurity have not kept near pace with our ever growing reliance on everything technology.

There is virtually nothing we do now-a-days that does not involve networks, chips, and bits and bytes.

If ANYTHING serious happens to cripple our technology base, we are toast!

From a crippling cyberattack that disables or hijacks our systems, steals or locks down our data, or creates massive chaotic misinformation flow to a EMP blast that simply fries all our electronic circuitry–we are at the mercy of our technology underpinnings.

Whether it’s Wannacry ransonware or the Equifax breach of our privacy data or the Kaspersky Labs hidden backdoor to our top secret files or North Korea threatening to hit us with an EMP–these are just a few of the recent cyber events of 2017!

Technology is both a blessing and a curse–we have more capability, more speed, more convenience, more cost-effectiveness than ever before, but also there is greater vulnerability to complete and utter death and destruction!

This is not just a risk that life could become more difficult or inconvenient–it is literally an existential threat, but who wants to think of it that way?

People, property, and our very society is at risk when our cybersecurity is not what it must be.

It’s a race of defensive against offensive capability.

And we can’t just play defense, we had better actually win at this! 😉

Scientific researchers in Britain, Norway and the U.S. are bringing us a major breakthrough in material science—by developing a “super strength” substance called graphene.

According to the Guardian (26 December 2012), graphene has “unmatched electrical and physical properties.” It’s made of an “atom-thick sheet of carbon molecules, arranged in a honeycomb lattice,” and promises to revolutionize telecommunications, electronics, energy industries, not to mention the untold applications for the military.

– Conductivity:  Transmits electricity a million times better than copper
– Strength: The strongest material known to humankind, 200 times that of steel (Sciencebuzz)
– Transparency & Flexibility:  So thin that light comes through it; more stretchable than any known conductor of electricity

Just a few of the amazing uses graphene will make possible (some of these from MarketOracle):

– Home windows that are also solar panels—clear off that roof and yard
– TV in your windows and mirrors—think you have information overload now?
– Thinner, lighter, and wrappable LED touch screens around your wrists—everyone can have Dick Tracy style
– Medical implants and organ replacements that can “last disease-free for a hundred years”—giving you that much more time to be a helicopter parent
– Vastly more powerful voice, video and data and palm-size computers—giving the average person the “power of 10,000 mainframes”
– Both larger and lighter satellites and space vehicles—imagine a skyscraper-size vehicle weighing less than your “patio barbecue grill”!
– Tougher and faster tanks and armored personnel carriers with the plus of an invisibility cloak—even “Harry Potter” would be jealous

The potential is truly amazing, so whomever thinks that the best technology is behind us, better think again. Better yet, soon they’ll be able to get a graphene brain implant to help them realize what they’ve been missing. 😉

(Source Photo: here with attribution to University of Maryland)

I took this video of a flying drone at Brookstone at Avetura Mall in Miami.

The drone is flying among the crowds and actually goes right over my head a couple of times–I literally had to duck (as I think the salesperson was having some fun with me recording)!

The drone is being controlled via wi-fi by a iPhone and also works with iPads and Droid devices.

The controlled flying as well as the stunts seemed easy to do.

It has a front facing camera (and I think the salesperson said it has a rear-facing one too).

You can capture the flight imagery and post the recorded video and still photos online.

The quadricopter has stabilization controls and hull protection to keep the device safe and in the air.

If you appreciate this technology and likes to have some fun, you may want to take this for a little spin around the yard, park, and beach.

Also, watch out at the mall–this flying gizmo may be coming right at you. 😉

Electromagnetic Pulses (EMPs) are the weapons of choice against electronics of all sorts, including cyber.

The Economist (15 October 2011) in an article called Frying Tonight describes how “warfare is changing as weapons that destroy electronics, not people, are deployed on the field of battle.”

During the Cold War, the notion was to explode an atom bomb high in the atmosphere (i.e. a High-Altitude EMP or HEMP) “to burn out an enemies electrical grid, telephone network, and possibly even the wiring of his motor vehicles.”

By zapping electronics, EMPs can take down enemy missiles, destroy command, control, and communications capability, and stop in their tracks everything from enemy tanks to planes and speed boats.

EMP weapons are already being deployed:

– Fighter planes are being developed with EMP capabilities using the active electronically scanned array (AESA) as defensive weapons against air-to-air and surface-to-air missiles, while other planes (like the “Growler”) are being outfitted with offensive EMP capabilities.

– Land vehicles will be armed with EMP cannons such as the Radio-Frequency Vehicle Stopper that can stall enemy vehicles’ engines or the Active Denial System used as a heat-ray to disperse crowds.

At the same time, defenses against EMPs are being deployed, such as Faradays cages–which are enclosures of conducting material often in a mesh pattern that protects electrical equipment from getting fried.

What is important to note though is that EMPs are not just battlefield weapons–they can take out our everyday electrical and cyber systems.

A Congressional Research Service (CRS) Report to Congress (21 July 2008) called High Altitude Electromagnetic Pulse (HEMP) and High Power Microwave (HPM) Devices: Threat Assessments states “Several nations, including sponsors of terrorism, may currently have a capability to use EMP as a weapon for cyber warfare or cyber terrorism to disrupt communications and other parts of the U.S. critical infrastructure.”

The EMP Commission reported that EMP “creates the possibility of long-term, catastrophic consequences for national security.”

One of the major concerns is the “cascading effects” that a loss of electrical infrastructure would cause in terms of people being unable to obtain basic life necessities and thereby resulting in that “many people may ultimately die.”

The report finds EMP weapons to be an “attractive asymmetric option” for our adversaries, and that analysts find that “it could possibly take years for the United States to recover fully from the resulting widespread damage.”

Therefore, it is critical that we increase our cyber security capabilities not only in terms of fighting conventional malware attacks from within the cyber realm, but we must be thinking in ernest about energy weapons directed at us from without.

We must continue to harden our defenses, invest in new technologies and countermeasures to thwart the enemy, develop punishing offensive capabilities, as well as prepare for the possibility of a strike against our homeland.

Although called “human-safe” (and aside from the traditional weapons of mass destruction), EMPs may be actually one of the most devastating weapons of all to a society dependent of technology.