Totally awesome new technology breakthrough for treating hemorraging patients from the battlefield to the obstetrics ward.

Popular Science reports how a pocket-size syringe filled with sponges can stop bleeding in seconds.

Instead of having to apply wads of gauze and apply pressure”that doesn’t always work…[and] medic must pull out all the gauze and start over again,” the injection of sponges into the wound “boosts survival and spares injured soldiers from additional pain.”

This same technology developed by RevMedx for the military is being adapted for postpartum hemmorages, and I would imagine could eventually be used in other serious bleeding cases whether caused by accident, trauma, in surgery, or other medical necessity.

The sponges are about 1-centimeter circles and are coated with a blood-clotting, antimicrobial substance.

Once injected, the sponges expand to about 20 times their size to fill the wound, apply enough pressure to stop the bleending, and clings to moist surfaces, so they aren’t forced out by gushing blood.

The sponges have X-shaped markers on each that are visible on an x-ray image to ensure none are left inside.

The solution is sterile, biocompatible and in the future may be biodegradable so they don’t have to be removed from the body.

And to think that the inspiration was Fix-a-Flat foam for emergency tire repair. 😉 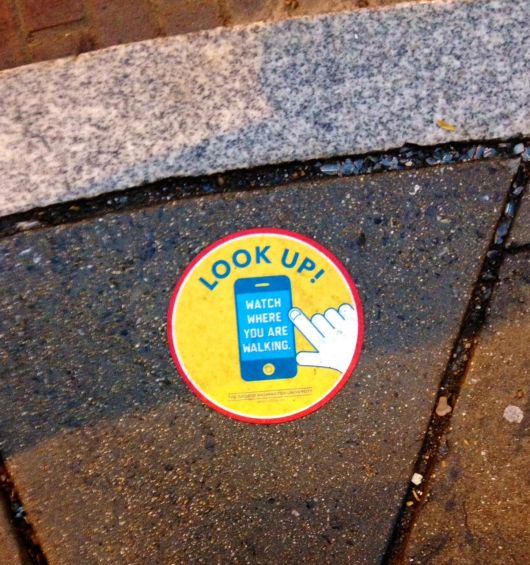 On the Street in Washington, D.C., there is this circular sign on the ground.

It says: “Look up! Watch where you are walking.”

This is a good reminder, especially on the corner, right before you step off and possibly walk into some ongoing traffic.

People get distracted walking and even texting while driving and they can have big accidents because of this.

But an article by Christine Rosen in the Wall Street Journal takes this notion quite a bit further.

She proposes that people are so busy on their smartphones and tablets that they are either “oblivious to their surroundings” or more likely to want to film emergencies rather than get involved and help someone in trouble.

She has examples including in December 2012, when a freelance photographer took a photo of a man run over by a train instead of trying to help him off the tracks.

However, I am not convinced that it is the computing devices that make people into “apathetic bystanders” or “cruel voyeurs” any more than the salons in the Wild West made people into alcoholics, gunslingers, and patronizers of prostitutes.

Let’s face it, people are who they are.

Things do not make us do bad, but lack of self-control and base impulses, poor moral upbringings, brain chemistry and brainwashing, and psychological problems and disorders cause people to behave in antisocial and immoral ways.

If people weren’t filming someone being attacked on the subway, then very likely they would be running out at the next available stop or changing cars as soon as they could get that middle door opened.

Those helpful people, good samaritans, and even heroes among us, are not there because they left their iPhones at home that day, but because their conscience tells them that it’s the right thing to do, and perhaps that they would want someone to help them or their family member if the situation was reversed.

People like to blame a lot of things on technology, but saying that we are “losing our sense of duty to others because of it” is absurd.

The Huffington Post (28 June 2012) ran an article this weekend called “Land of the Free, Home of the Unprepared.”

This at a time, when the United States East Coast is battling a heat wave with temperatures over 100 degrees for days running.

Emergencies have been declared in many states, including Maryland, Virginia, West Virginia, Ohio, as well as in Washington, D.C.

On top of that, an early weekend storm with hurricane-force winds took out the power for millions!

Utilities described the damage to the power grid as “catastrophic” with restoration taking up to a week for some.

People were seeking refuge from the heat with no power at home for airconditioning, refrigeration, or telecommunications.

Everywhere–at Starbucks (the garbage was piled high), Barnes and Nobles, the Mall, people were sprawled out in chairs and even on the floors, and were powering up their devices wherever they could find an outlet.

Moreover, there were long lines at gas stations and supermarkets, where power was working for some.

Many street lights were out at intersections and many other stores were either closed or only taking cash.

While catastrophes do happen including natural disasters, the frequency, duration, and impact in the Washington, D.C. area–the Capital of the United States–is ridiculously high.

I could not help thinking that if something more serious struck–whether terrorism, pandemic flu, a serious earthquake, or whatever, 11 years after 9/11, we seem really ill prepared.

We need to get our game on, not only when the heat is up, but for disaster preparedness in general.

When a disaster or emergency strikes, who is in charge—federal, state, local, or tribal authorities? Police, fire, rescue, medical services, public works, environmental response professionals? Who has jurisdiction? How is incident response coordinated?

“The National Response Framework (NRF) presents the guiding principles that enable all response partners to prepare for and provide a unified national response to disasters and emergencies. It establishes a comprehensive, national, all-hazards approach to domestic incident re

Government Technology’s Emergency Management Magazine, Spring 2008, reports that “only willing partners coming to the table, treated as equals, will prove effective in establishing a national standard for incident response.”

Why are there so many issues in coordinating incident response?

As a citizen, I frankly do not care about responders’ terminology, egos, training, or distaste for subordination—when there is a true crisis, I (like I believe any sane person) wants help to come, come quick, and come effectively. I want lives saved and property safeguarded.

From an enterprise architecture perspective, I acknowledge the challenge that we face in coordinating incident response among a broad spectrum of stakeholders and emergency response experts. However, at the same time, I cannot help but marvel at the current federated system of emergency response. I believe that emergency response needs to mature to one where there is absolute crystal clear chain of command and a solid, unified approach to dealing with disaster. All necessary and appropriate resources need to be brought to bear to help people in disaster and a coordinated response is a must.

Certainly, while there are technical issues in establishing common data standards, mechanisms for information exchange, interoperable systems, and securing these, it seems that the biggest issue is cultural. People and agencies are continuing to function in a siloed mentality despite the clear need for a unified approach to dealing with disasters as well as with the large, complex, and global problems that we face. I believe that this only underscores the need for “enterprise architecture” and that it is becoming more and more obvious that each of us doing our own thing is not going to enable us to solve the great issues of this century.