The Chinese government has the most brilliant as well as frightening use and control of social media.

I am not just talking about blocking Internet sites and free information flow.

They actually have mastered the use of social media for tracking and rewarding or punishing citizen behavior.

Their social credit system rates people’s behavior online for everything they do!

Similar to likes and dislikes, you are either labeled a “model citizen” sought after for jobs and good housing or you can be an “enemy of the state” treated as a social outcast who can’t even leave the country anymore.

Everything about you is now based on what you are rated (whether true or not)!

Now in China the government has added a snitching tool/app where people are encouraged through a points system that offers rewards like store discounts, coupons for coffee, taxis, and music streaming, in order to get them to report covertly on their neighbors–are their fellow citizens fighting, is there mental illness, are people cheating on their taxes, etc.

You’re being surveilled not just by the grid system, where every 300 households are watched and checked-in on by a “grid manager,” but you are subject to daily intrusion by anyone that wants to report on you.

Communication to “Big Brother” is way overvalued, while privacy and respect of the people are no longer important values or concerns.

Instead of a Security Operations Center to monitor and command response to life-threatening catastrophes and emergencies, now there is a “Social Governance Integrated Command Center” to display video and biometric surveillance from throughout the country as well as to show what are the “moods” and which “issues” are trending.

I say this is all brilliant and malign, because social media which can be a tool for connecting people and for the free flow of information and progress is instead used for near ultimate control and enslavement of the masses–both their minds and their behaviors.

People should not be treated as servants of the state and subjected to ever-encroaching social media surveillance and control that is not carefully balanced directly to absolutely necessary national security.

Rather the state and its levers of people’s supreme power should be subject to the wants and needs of its people who must freely decide on their collective futures and maintaining human rights.

Totalitarianism by police state, imprisonment, torture and “re-education” is now unfortunately facilitated by social media monitoring,  and credits system where truly you are watched by Big Brother in the flesh and in the bytes. 😉 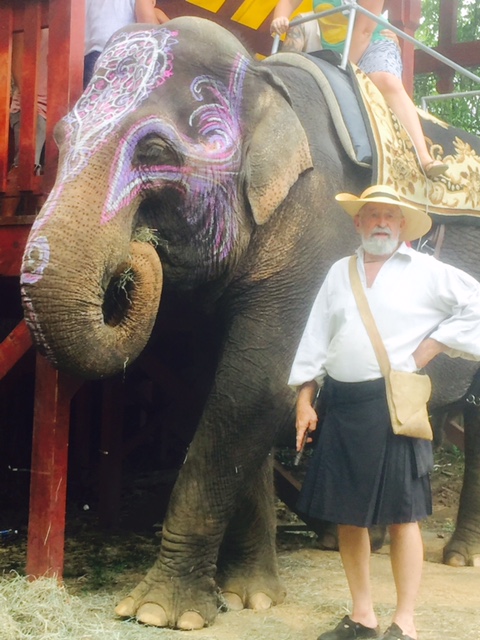 If you can stomach it, watch this graphic video of elephant taming.

The elephant is caged, chained, poked, prodded, beaten, spiked in all the sensitive areas.

It is tortured and left with festering sores and then made to do sickening slave labor.

While animals generally kill for food, people abuse, torture and kill for profit and maniacal enjoyment.

Sometimes, we wonder why G-d punishes the world.

But look at how the world behaves.

Is there no heart or soul in some people?

G-d forgive us for our sins and evil inclinations, and have mercy, and make your people better than this, much better. 😉 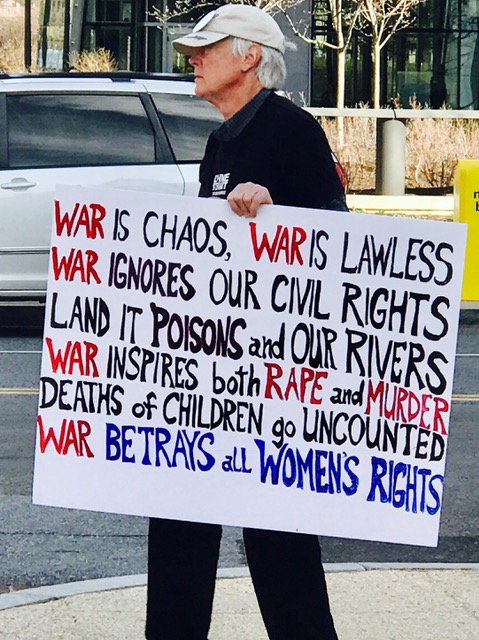 But this guy was protesting something else.

“War is chaos, War is lawless
War ignores our civil rights
Land it poison and our rivers
War inspires both rape and murder
Death of children go uncounted
War betrays all Women’s Rights”

Not sure how he connects this all up with women’s rights at the end, but might as well try, right?

For women to have the rights that they should, they need to fight the good fight too.

That type of war does not betray them, but bolsters their cause.

Everyone who has been abused, enslaved, and discriminated against needs to free themselves of the shackles of oppression.

What we do know is that “war is hell!”

And certainly war is an option of last resort.

At the same time, war can restore the peace and right the wrongs of despots and tyranny and violence and persecution.

War is something to be feared and avoided, until it can’t.

At which time, hell on earth is released, so hopefully peace can ultimately prevail once again.

In war, everyone loses, but with the hope that at the end, good wins!

For woman, today is also the continuance of that war and fight for equality, respect, and proper treatment in every way they completely deserve.

That’s a war worth fighting for. 😉 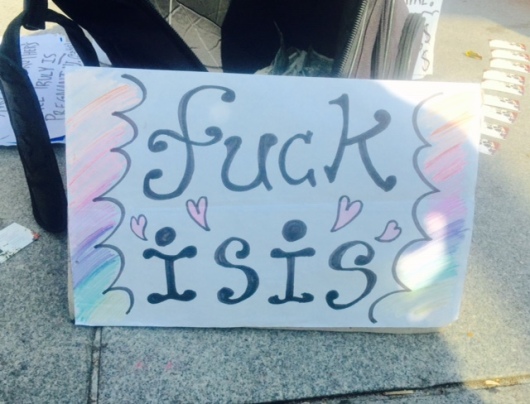 I was thinking of holding this photo for “the next” big terrorist attack (G-d forbid).

But it’s just two days before 9/11, and I thought of all the victims of ISIS terror and said, why wait.

So this is to memorialize all the victims of ISIS, Al-Qaeda, Hezbollah, Hamas, Islamic Jihad, Taliban, Boko Haram, the PLO, BDS, and other vile terrorist groups.

For all the victims–men, women, and children–you brutally and ruthlessly:

Threw off of Roofs.

Ran over with tanks and other vehicles.

For the mothers and fathers you made childless.

For the children you made orphaned.

For the husbands and wives you left widowed.

May the one G-d in heaven recompense you for all your evil deeds, may he thwart all your plans and attempts to harm, kill, and destroy, and may he thrust his heavenly spear of judgement through your devilish hearts and straight into the endless depths of Hell.

So on July 4th, I wrote and did a short video about how messed (f*cked) up things are in the world today (of course, technology-aside), and I advocated for people being a good influence and for constructive change.

On the positive side, I saw this neat bumper sticker to “Unf*ck The World,” and I checked out their website utwnow.org.

It was impressive to see people advocating for, banding together, and engaging to do good things to help others such as assist the homelessness by giving them haircuts, doing laundry, providing “mobile hygiene,” and helping with a thrift shop and job opportunities.

In contrast again, it was interesting in the Wall Street Journal today, there was an editorial on how Brexit (Britian leaving the EU) has nothing on Amexit (America’s disengagement from global affairs).

Around the world, there is cause for not only pause, but great concern.

– From allowing Syria to cross the red line in using chemical weapons (on civilians!) to the recommendation to not charge the former First Lady, we are in moral and leadership retreat.

– Russia takes over Crimea and agitates in Eastern Ukraine and the Baltics, while China continues its island buildup in the strategic South China Sea.

– ISIS continues to hold ground across the Middle East and Northern Africa and attacks targets literally everywhere in the world and routinely takes, enslaves, and sells women to the highest bidder on the Internet.

– North Korea and Iran test ballistic missiles, and nukes are a forgone conclusion for them.

– The U.S. is struggling to maintain its leadership role as we fluctuate between recognizing the dire need and pulling back all around.

In the election cycle, I think just about every single person I have heard from now says in near hopelessness something like, “If only there was another candidate that I could vote for.”

What we can do locally to help–and certainly there is a lot more to do there with poverty and homelessness–perhaps people can do nationally and globally in demanding more–not material things, but rather a real caring about others and not just ourselves, a genuine discourse on policy and not just punch lines for the next election or media soundbite, a solutions-oriented mindset rather than a gaming the system one, and a big vision to settle the stars, cure vicious diseases, pull everyone out of poverty, and resolve endless cycles of global conflicts.

Do you hear much of anything on this these days and is anyone taking the high ground or is it just who is more crooked and untrustworthy–this cannot be the answer. 😉

So I saw this quote on someone’s t-shirt.

Immediately, I thought this is pretty smart and took a mental photo.

I suppose the question is how much of the world we live in are lies and fallacies to deceive individuals or the masses.

Lies made up by liars, driven by materialism and greed, by people seeking or taking power, lies to enslave others in thought and deed, lies to get people to do what we want them to or to get them to follow us blindly, lies to get our way or to get others to abandon theirs, lies to cheat, lies to steal, lies to corrupt, lies to control, lies to obscure or cover our tracks, lies to rewrite history, lies to create phony legacies, lies for the sake of lying.

All the rest is the truth. 😉 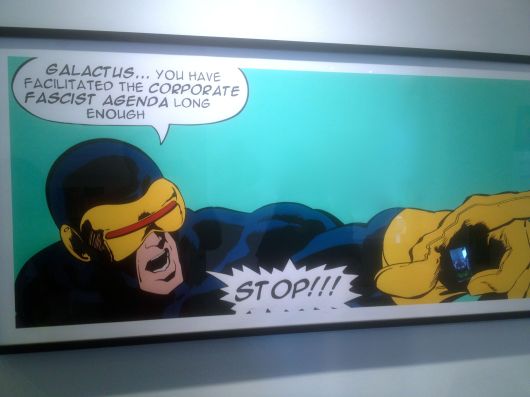 Here’s a photo I snapped of one of the Fantastic Four (superheroes).

He’s telling the evil Galactus, who drains planets of their life’s energy, to “Stop!”

He yells at Galactus, “You have facilitated the Corporate Fascist Agenda long enough.”

I think we all know a Galactus (or two)!

In every company and agency…there are individuals that seem to literally suck the creativity, problem solving, and life force from the bowels of the organization.

They complain incessantly, make excuses for their lack of support and contribution, erect obstacles to progress, and needlessly put down other people’s ideas and contributions.

These Galactuses facilitate their own or a corporate agenda–to raise their stature, power, and purse.

They can be–almost G-d like figures in the organization that are feared and cowed to–but in the long term it’s counterproductive to enslave humanity to them.

You can be like the Fantastic Four, who recognizes problem people and calls them out for bad behavior–you can be part of changing the culture from a BIG VILIAN negative to a SUPERHERO positive.

It starts, like in the comic–by identifying their personal agendas and bad behaviors and telling them to stop as well as by working with or around them to facilitate progress.

Galactus, you are finished! 😉