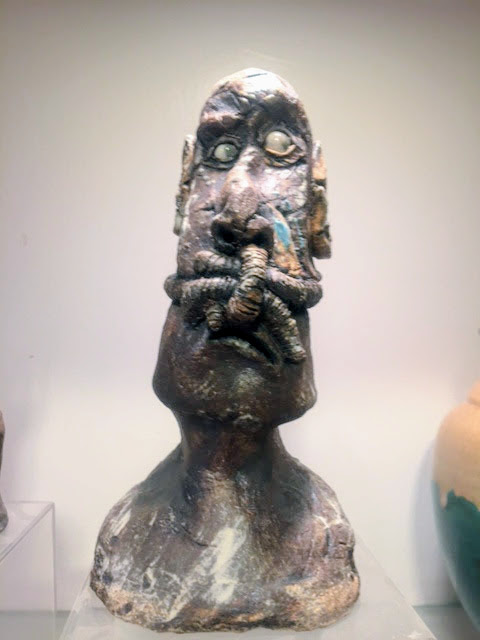 Too shocked, shamed, confused, or abused to speak or perhaps to even know what to say anymore.

Maybe in the face of some horrible things that happen in life, there really are no words.

Instead, the vacant or crazed look in the eyes says it all.

People go through a lot–some of it is inhumane.

Sometimes, only tears can even begin to express what they are feeling.

I think one thing that is important to do, even when we’re not sure what to say, is to acknowledge that it is okay.

Usually, I’m told to ask at least 5 times (i’d say at least 3) to decompose to what is really going on underneath the superficial covers.

Sometimes, people have difficulty getting in touch with their true feelings or accurately diagnosing what’s bothering them.

It’s more than okay to be thoughtful, be deliberative.

Words are often cheap, but they shouldn’t be.

Our words should be truthful, meaningful, insightful, even righteous.

Take all the time you need, your words are worth it. 😉

So many faces, so much phoniness.

Why can’t we just deal with genuine people?

Everyone seems to put on a face.

One person comes in the room, puts on a big smile and then drops it like you do your pants in the bathroom (excuse the comparison).

But it’s just so wax!

Another person is talking it up, but you can see just under the thin veneer, they are a boiling powder keg ready to go off.

However, they are used to deceive and fool the world around them.

What’s behind it–good or evil?

If you don’t look past the superficial then you are the real dummy.  😉 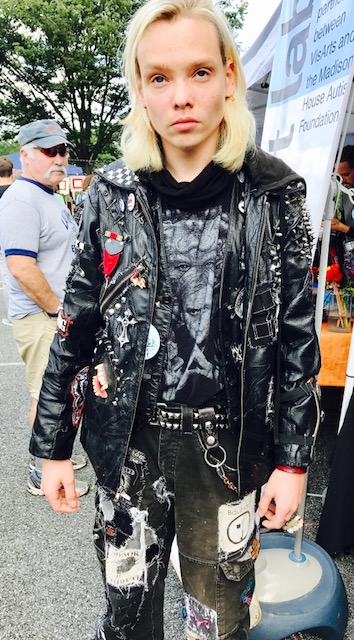 So today we were at the Takoma Park Folk Festival.

It was a combination of food, chachkas, art, dance, and music–thank G-d, it was a good time!

When we were going through the booths, I came across this one artist pictured here.

A little scary looking at first, but actually seemed nice enough and he stopped to speak with us.

I asked about his very cool jacket.

And he told me, how he had actually made it with all the artistic things on it, including spikes, skulls, medals, patches, and even a pair of teeth!

Then he took off his jacket and turned around to show me his vest.

On the back was this awesome fighting foe.

“Yeah, never miss an opportunity to share a message!”

I thought to myself this guy is pretty smart, especially as he started to explain not only his jacket, but the meanings behind some of his other artwork.

Creativity is a wonderful thing–especially when no one gets hurt :-)–and it immediately sparks interest and dialogue.

How’d you do that?  What gave you that idea?  How do you use it?

The boring becomes exciting when another soul expresses itself.

Yes, we’re all the same, but also we’re all different!

It’s by “going there,” you explore and learn new things.  😉

But outside the White House, the music is piping.

Even if our politics is murky at times, our songful expression is always loud and clear.

The towel over the head keeps the perspiration from overflowing and the music fluid to the masses.

We are a sophisticated country–full of culture, diversity, and heartfelt soul.

I thought this was a very cool genie lantern on display at the Magen David Sephardic Synagogue last evening for the lecture on Women Poets of Morocco.

Of course, people gathered around joking about whether, as legend has it, there was a genie inside.

They asked, what do you have to do to try and get the genie out to make your three wishes.

Well of course, they say you have to rub the lantern–where the heck did that come from?

Me being the curious jokster that I am just picked the lantern up off the table and flipped the top open!

Low and behold, it was completely empty–no genie to be found.

Needless-to-say, I was quite disappointed hoping for an I Dream of Genie lady to magically appear or for a flying Persian magic carpet to whisk me away somewhere exciting.

Then I thought, perhaps someone else got to the lantern first?

And darn, they say you can’t put the genie back in the bottle!

A great notion when it comes to transparency, freedom of ideas and expression, no repression…but when you still are waiting for your three earth-shattering wishes then perhaps you still need to find your magic lantern. 😉

So this is the graffiti on the wall of the ladies bathroom in Barnes and Noble.

My wife said to make sure everyone knows that she took the photo and not me (uh, that would be awkward).

I can’t make out all the graffiti on the wall, but the one in the center says:

“True love isn’t something made up in stories or books. It exists truly, if you believe truly, and truly fight for it. Real love is magic.”

Another one talks about “Gonzales” who is the most beautiful man.

And yet one more…

“I wish I knew how to tell my boyfriend I love him.”

Let me just be frank that the Graffiti in men’s bathrooms is nothing, nothing like this.

Why do women write and profess their love for men on bathroom walls, while men seem to think and express themselves in far more graphic terms–and why do this while in the stinkin’ bathroom?

I think this may make for some interesting gender studies for someone out there.

From a technology perspective, I think if people are going to insist on thinking and fantasizing in the public bathroom, perhaps we need some white boards or monitors that you can write and erase from–that way at least we can make room for the next guy/gal to write their truly’s next. 😉

According to the U.N. report, “The Internet has become a key means by which individuals exercise their right to freedom of expression.”

But as Good points out, this is not just a “third-world concern,” since even in America those without high-speed access cannot adequately perform certain functions “and that surely this affects their ability to get informed, educated, and employed.”

The U.N. is pushing for more protections for people to “assert themselves freely online,” but Good proposes that Internet access means more than just freedom of expression, but also the right to more public Wi-Fi access, better access to technology in libraries and I would assume in schools as well.

Interestingly enough, just on Thursday, Mayor Bloomberg of NYC and AT&T Chairman and CEO Randall Stephenson announced that as part of NYC’s “Road Map for the Digital City,” they were launching a five-year initiative for free Wi-Fi service at 20 NYC parks—this is seen as a “critical developmental tool” for children, families, and communities.

The Internet stands alone as a technology that is now a “human right.”  Radios, televisions, and telephones—none of these have that status.  Yes, we have freedom of speech, but the technologies that enable them are not seen as a human right.

Similarly, access to the printing press (i.e. the technology for printing) itself is not a human right—rather, freedom of press (i.e. expression through print) is.

Do we not communicate and express ourselves over radio, TV, telephone, and other technologies as we do over the Internet? Do we not get information from them and through them?  Do we not reach out with them to others both nationally and globally as we do over Net?

The answer to all of these is of course, we do.

So what is distinct about the Internet that the mere access to it is declared a human right?

I believe it is the fact that the Internet is the first technology whose very access enables the protection of all the other human rights, since it empowers EVERYONE to hear and speak from and to the masses about what is going in—whether in the tumultuous streets of the Arab Spring to the darkest prisons silencing political dissent.

While radio and television, in their time, were important in getting information and entertainment, but they were essentially unidirectional modes of communication and these can be manipulated by the powers that be. Similarly, the telephone while important to bridging communications over vast distances was for the most part constrained between two or at most a few individuals conversing.  And publishing was limited to the realm of the professionals with printing presses.

The Internet has put tremendous power into the hands of every individual.  This is now a declared right.  With that right, there is a tremendous responsibility to share information and collaborate with others for the benefit of all.

Of course, as a powerful tool of expression, the Internet can also be used malevolently to express hatred, racism, bigotry, etc. and to malign other people, their thoughts or opinions.  Of course, it can also be used to steal, spy, hack, and otherwise disrupt normal civilization.

So we also all have the responsibility to behave appropriately, fairly, and with dignity to each other on the Internet.

While I applaud the U.N. for declaring the Internet a human right, I would like to see this expanded to include both a right and responsibility—this to me would be more balanced and beneficial to building not only access, but also giving and tolerance.