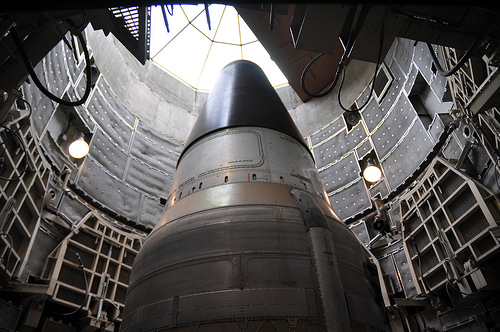 We all know the frightening threat of intercontinental ballistic missiles (ICBMs) heading over the ice caps–from Russia, China, and even North Korea someday) and landing in our “backyards” destroying life as we know it.

But what The Washington Beacon reports about the arms race to new ultra-high speed missiles means we are probably dead already and don’t even know it.

These new missiles being developed by China, Russia, India, and the U.S. are designed to be so fast, so small, go so low (“ground-hugging), and be so maneuverable with precision guided systems that they may completely evade all our missile defenses (long-range interceptors, medium-range sea and land-based interceptors, and short-range, near target interceptors).

China tested one of these on Jan. 9–it would sit atop an ICBM and “then glide and maneuver at speeds of up to 10 times the speed of sound from near space en route to its target.”

It “takes off towards its target from near space, or less than 62 miles from earth.”

Traveling at Mach 10 or 7,680 miles per hour, the warhead would hit accordingly to my calculation in under 30 seconds!

These hypersonic weapons can be loaded on the last stages of ICBMS, submarine missiles, aboard strategic bombers, on cruise missiles, and even on surveillance drones.

This is the “hypersonic arms race” and the winner has asymmetric warfare advantage and can take out their opponent before the other guy even knows what hit them.

The good news is that the U.S. is testing the Lockheed HTV-2, Hypersonic Technology Vehicle, capable of Mach 20 (13,000 mph), and within the next 10-15 years we expect “rapid kill” to be able to “attack any location on earth within an hour.”

Note: the diameter of the earth is only 7,926 miles so if we can achieve Mach 20, it will actually only take us about 36 minutes!

So conventional missile defense is a bust, which leaves kinetic weapons and lasers (high-speed hit-to-kill capabilities) as our last defensive hope, as Ian Easton of the Project 2049 Institute said, “If there is a great power war in this century, it will not begin with the sound of explosions on the ground and in the sky, but rather with the bursting of kinetic energy and the flashing of laser light in the silence of outer space.”

What follows though is anything that gets through these defenses rings will destroy everything down here before you would even have enough time to read this post.

In a sense, we’re all dead already, and this is a very small foreshadowing testament.