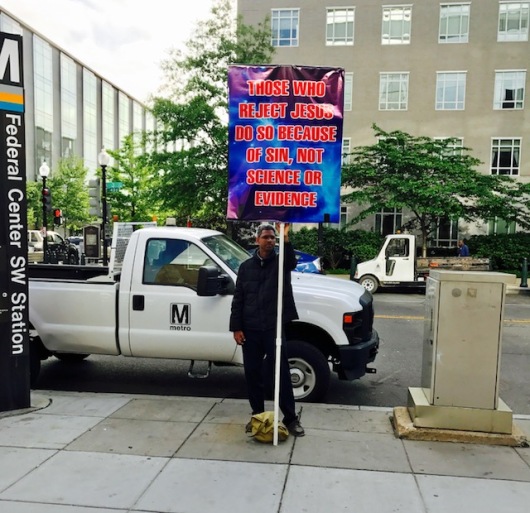 I thought this was an interesting sign this gentlemen had.

“Those who reject Jesus do so because of sin, not science or evidence.”

Overall, religion is a matter of personal faith not to be argued, but rather when based to good, to be wholly respected.

This argument though was basically saying, not to reject this particular tenet of faith of a major religion because there is “not science or evidence” from which to reject.

But usually, don’t we look for science or evidence to accept or do something.

In other words, the default usually is that if you want me to believe in something or somebody, prove to me why I should.

It’s a bad argument when you ask me to prove to you why you shouldn’t believe in something.

Very often this is the same argument people use in relationships and in organizations.

We do the same thing everyday or over and over again, and we often don’t ask ourselves why we do it this way or believe this is a good way of doing something…we just do it.

And in fact, when someone new comes in with “fresh eyes” and questions why we do it a certain way or have we considered another approach, we ask them to prove to us with “science or evidence” why their way is better, rather than reexamine our own ways and means.

I’m not in any way questioning here G-d or religion, but rather simply our approach to self-examination, introspection, and betterment.

Don’t ask me to prove to you why you should reject something, but rather be prepared to defend your hypothesis. 😉