When our forefather Itzchak was about to bless his son Jacob and he said the words (are good) like Jacob, but the hands (deeds) feel like Esau.

Good deeds mean something, but words are easily manipulated.

We can all spot good deeds, and that is what must guide our judgement of people and situations–that is where the truth rests.

Like my father and grandfather always taught me–some people are good and some are not so good.  😉 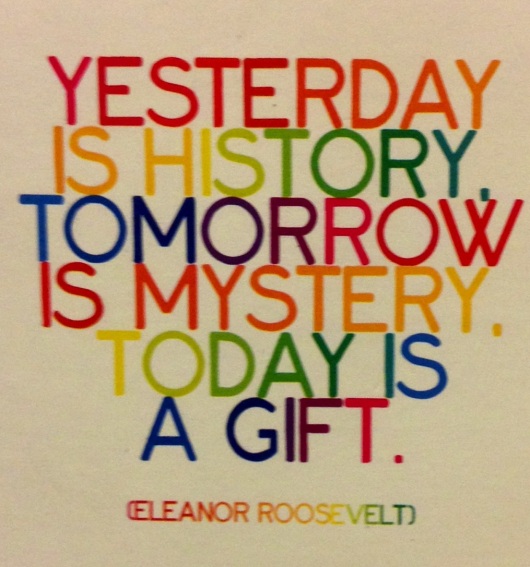 That is to consider how you will feel about the decision in 10 minutes, in 10 months, and in 10 years–in order to “get some distance on our decisions.”

But this doesn’t make a lot of sense to me, if you are making a decision, looking at it with 3 future lenses does not provide a lot of additional insight even if they are at various points in the future.

What makes a lot more sense is to examine the decision based on past, present, and future consideration.

Past–At home, I learned from my father that when he makes a big decision, he thinks about what his father would’ve have done in a similar situation. My dad greatly respected his father, and believes that he is a guiding force in his everyday life. It is important to consider what our parents, grandparents, and other people that we respect from our past would do in similar circumstances–this is a social view. For example, would your parents and grandparents be proud of your decision and what it represents for you as a person or would you feel ashamed and guilty, if they found out. This is not to say that you can’t express your individuality, but rather that your past is one important guidepost to consider.

Present–In operational law enforcement and defense environment, I learned that you have to respect the decision-maker at the frontline. The details of what is happening or the ground in the here and now can certainly be a decisive factor in both split second decisions, but also those decisions where we have some luxury of contemplation–this is an operational view. Additionally, in making a big decision, we need to be true to ourselves and base the decision on our values and beliefs (i.e. who we are). In contrast, when we make decisions that violate our core beliefs, we usually regret it pretty quickly.

Future–In Yeshiva, I learned to strongly consider the future in all decision-making. The notion that this world is just a corridor to the future world was a frequent theme. From this religious perspective, what is important in how we live our lives today is not the immediate pleasure we can get, but rather what the future consequences will be on our spirit/soul (i.e. Neshama)–this is a strategic view. One teacher exhorted us to always look at things from the future perspective of our death bed–will you feel you lived your life as a good person and in a fulfilling way or did you just do what felt good or was selfish and fleeting? For example, he said, “No one ever looked back and wish they spent more time working. Instead, they usually regret not spending more time with the family and true friends.”

Decision-making is not trivial–you need to consider carefully what you do, with whom, when and how. To do this, looking at 3 points in the future is minimally helpful. Instead, consider your past, present, and future, and you will make better decisions that will enable you to be true to yourself, your family and community, and your very soul.

It’s tough to get the truth from people in the organization as to how things are really going.

Are their programs successful or not, is everything okay on their staff, will they–without fudging the numbers–meet their performance goals and targets (if they have any), and so on.

People are afraid if they made a mistake or something isn’t working as intended that they will be in trouble.

Maybe they will be yelled at, lose authority and power, be sidelined, demoted, or even fired; and their organizations may be downsized, outsourced, consolidated with another, or outright eliminated.

So people hide the facts and the truth–as if, what they don’t know, can’t harm me.

So everything appears copasetic in organization-land!

But the truth is we need a solid guidepost to know where we are going, which paths are safe, and which are fraught with danger–and that is anchored in open and honest communication. .

There is a great story about this in Bloomberg BusinessWeek (15 November 2012) about how in 2006, when ex-Boeing executive, Alan Mulally took over as CEO of Ford–and Ford was bleeding red ink, facing their largest loss for automobiles in history of $17 billion, that at the executive Thursday morning meetings, the performance scorecard for their initiatives “was a sea of green.”

Here the company is bordering on financial collapse, but the executives are reporting–all clear!

The story goes that Mark Fields, head of Ford’s North American business stepped up and showed the first red revealing a problem with a problem tailgate latch on their new Edge SVU that would halt production.

With the room filled with tension, Alan Mulally rather than get mad and castigate or punish the executive, what did he do–he clapped!

Mulally said: “Great visibility. Is there anything we can do to help you?”

And what ultimately happened to Mark Fields, the executive who told the truth about problems in his area of responsibility?

Last month, “Ford’s board elevated him to chief operating officer,” which analysts read as a sign that he will be the next CEO when Mulally is supposed to retire at the end of 2014.

The bottom line is that we cannot fix problems if we can’t identify them and face up to them with our people.

While we need good data and sound analysis to identify problems in the organization, problems will remain illusive without the trust, candor, and teamwork to ultimately come to terms with them and solve them.

I love this story about Ford and think it is a model for us in leadership, communication, and performance management. 😉