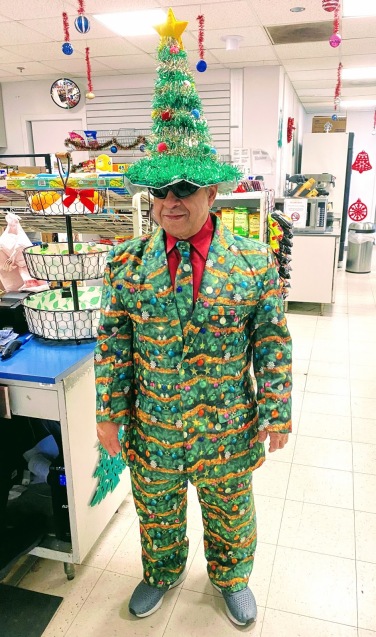 This holiday outfit has got to win an award.

The matching suit and tie with all the decorative holiday ornaments.

The tree hat with the star on top.

And the dark glasses.

I wonder if I could do this with a menorah too. LOL

Happy Holidays to all.  😉 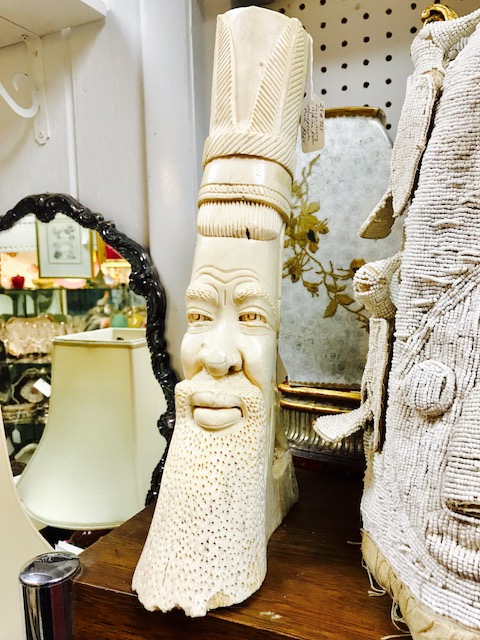 I just loved this Asian sculpture that I found in this cool antique store.

It was white and slim with a Asian man face, long beard, and tall hat.

The face was so expressive.

The eyes so alert and watching.

The beard and hat made him look old and wise.

As a real person, this is someone who has seen and learned so many things.

Forever trying to learn the secrets of the life.

This is a person to consult and get guidance from.

And with (occasional) reincarnation comes more opportunity to learn the painful lessons that we haven’t, but must.

How long has this man been sitting there watching and learning–how long must we? 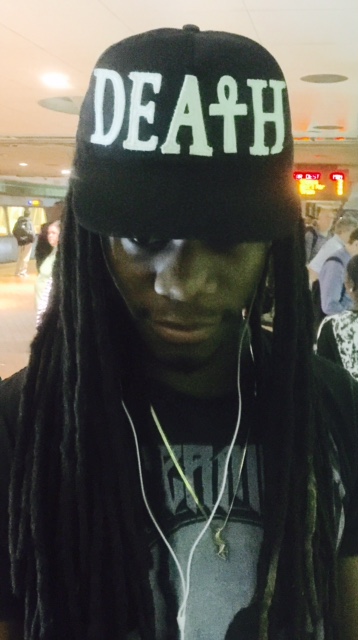 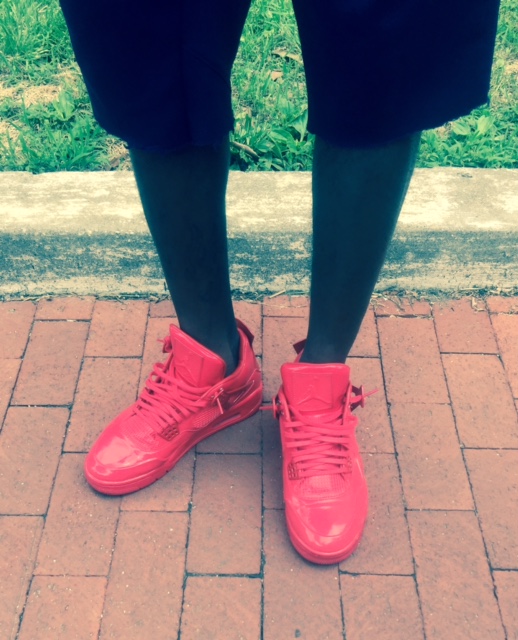 So I took these photos of two young fashionable men.

The first had a very cool “Death” cap on.

And the second had the reddest pair of sneakers, I’ve ever seen.

Both were stylish standouts!

To me, the hat confronted the scariness of death head-on (excuse the pun) or that the person is themselves, in a sense, death to anyone that starts with them or gets in their way–it is not only bold in terms of the big white letters, but in terms of the courage to face the harshest of all our realities.

Then to the shoes, going red and untied, spoke to me in terms of looseness, comfort, and ease with yourself–you are who you are and the world be darned!

Both the cap and the shoes are in your face and make a statement of cool nonchalance and the daringness to confront “whatever.” 😉 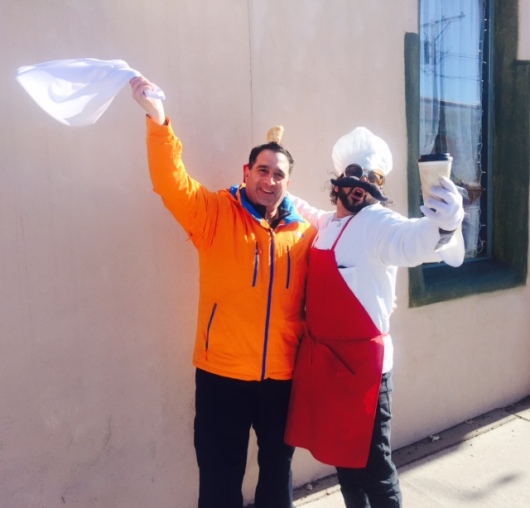 This was a funny picture when we were out west.

This guy is standing on the corner dancing around in his apron and chef’s hat.

He’s also got a big fat fake mustache on top of his real one and big round glasses/googles on his face.

He is working hard to attract people to come into his restaurant.

This “chef” calls over to us jumping around–doing anything to get our attention.

So we had already eaten lunch, but he did get us to stop and say hello–this picture captures the moment. 😉 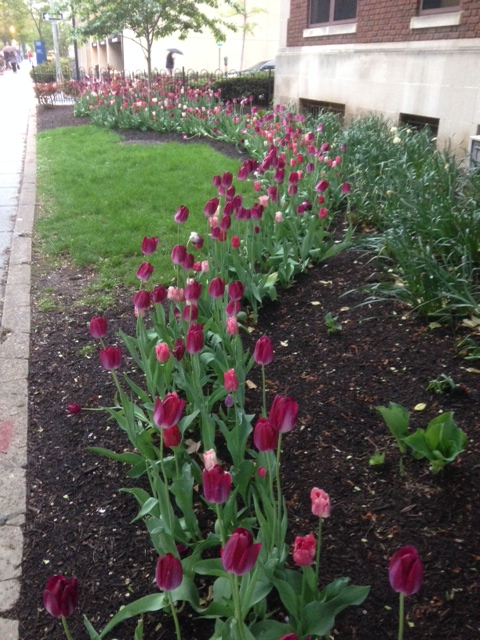 Thought these were awesome, even though the gardner did a little bit of a crooked job here.

And when it comes to crooked, I overheard a funny story in the locker room the other day.

These school students were talking about getting caught stealing something in a local store.

One says that he got spotted on the surveillance cameras and that they even have facial recognition now, but he’s okay on that because he was wearing a cap.

Another kid in the group says “why didn’t you just tell them you didn’t know you couldn’t take it!”

Some very sophisticated crooks we got here. 😉 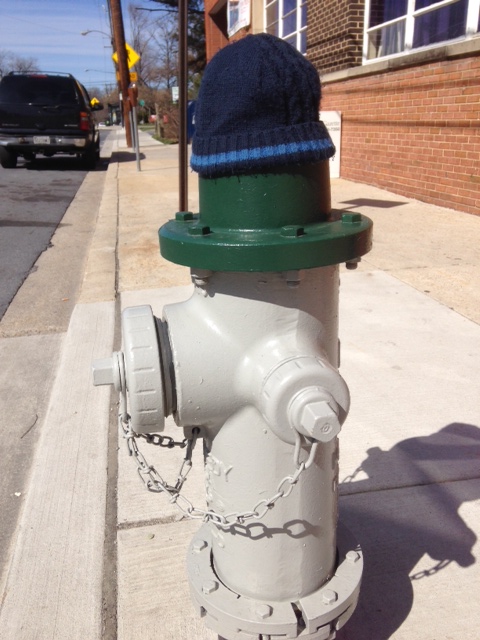 Yeah, a fire hydrant with a hat on.

Keeps the water warm in winter and serves as a stylish accoutrement to an important fire protection device. 😉 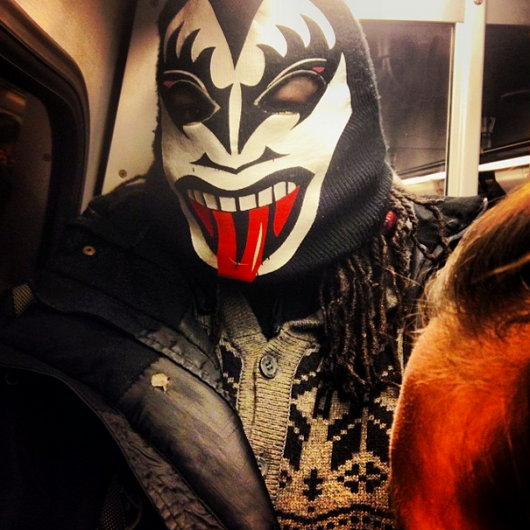 So it was 3 degrees in Washington, D.C. today (and that’s before wind chill).

I don’t ever remember it being this cold, ever!

Getting on the Metro this evening, this big guy came on wearing this scary hat.

But what was really unusual was that even while we were on the train for a while, he didn’t take the scary hat off.

I didn’t know whether this guy was just still cold or whether we was a murderer or terrorist in waiting.

After a while, I said to the guy, I have a blog and does he mind if I take a photo–and he was nice enough and said, “Go ahead.”

So this is how he rode the Metro all the way home.

Today was a scary cold day–because of the temperature for sure, but also because of this unbelievable hat.

I was literally right in front of this guy–how do you think that felt? 😉 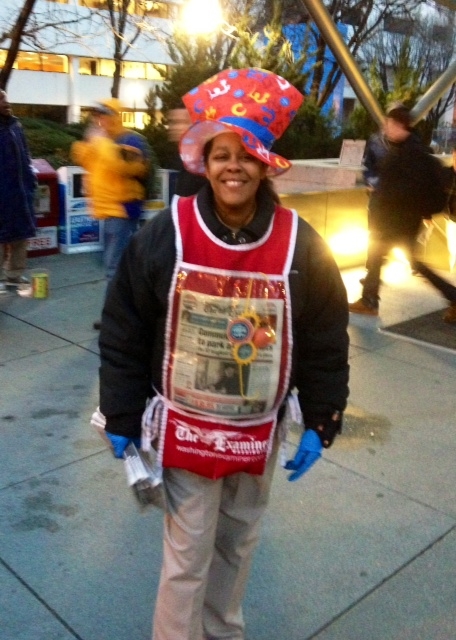 Some people give out the newspapers in the morning with a loud and resonant, “Get your daily newspaper!”

Others with a call to duty, “Look alive people–it’s a workday!”

A more tame and spiritual approach is the man who wishes everyone with, “Have a blessed day!”

And finally this cheerful young lady who greets everyone coming out of the Metro with a warm smile and a great happy hat!

Thanks to all the hardworking folks providing the news at Metro in the mornings, in all weather, and also at no cost. 😉 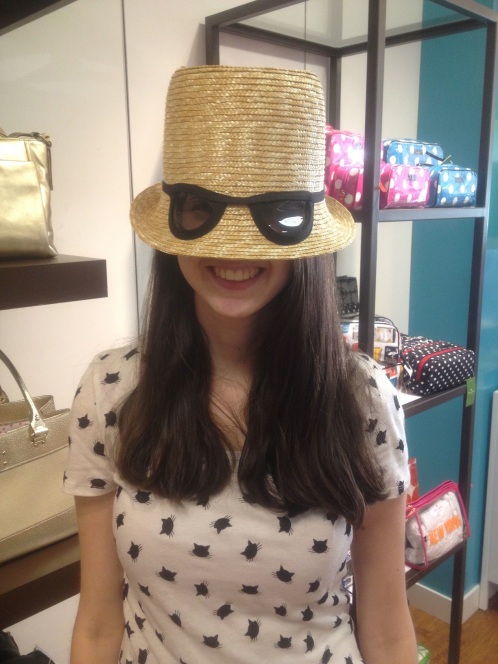 Even a hat can get a A+ for integration and this one does.

It comes as a nice straw hat with eye slots and a sunglass effect built in–just roll the front lid up and down to adjust the coverage.

Takes a little of its strong look from Batwoman and a lot from the runway models of Fashion Week.

I like it for its creativity and coy looks–not so much for it’s functionality, I am sure.

So Apple may have a lock-up on integration when it comes hardware and software these days, but Kate Spade has it hats-off in the fashion arena.