So one huge downside to this Coronavirus shutdown is that you can barely get any help for other medical conditions or elective surgeries.

I just heard this morning from a relative about family members that can’t get shots they need for pain control or surgeries for breathing problems.

Everything now is COVID-19.

That’s the priority (maybe all of the top ten priorities)!

Coronavirus patients are who the hospital and ICU beds are for now.

Perhaps, the global medical community has gone a little Coronavirus crazy, extreme, radical, overboard in their singular focus, panic, and chaos over just one virus to the exclusion of everything else!

Certainly, we have a lot to be grateful for to the dedicated and selfless doctors and nurses in the medical community for everything they are doing to help people with Coronavirus under very trying circumstances.

The problem is that in the meantime, people that have new or other chronic conditions are being left out and sometimes to rot.

Unless of course you are a big fan of telemedicine, which may be good to get something routine looked after, but something major, and I think you’re in big trouble.

After this Coronavirus (assuming there is an after), there is going to be a lot of pent up demand for medical care.

I think a lot of people are suffering now with conditions that they were waiting to take care of until they were absolutely necessary, but unfortunately when it became necessary, then the care was not there.

Makes you wonder whether and when you should do or put off medical procedures in the future: just because the care is there “today,” doesn’t mean it will be there tomorrow. 😉 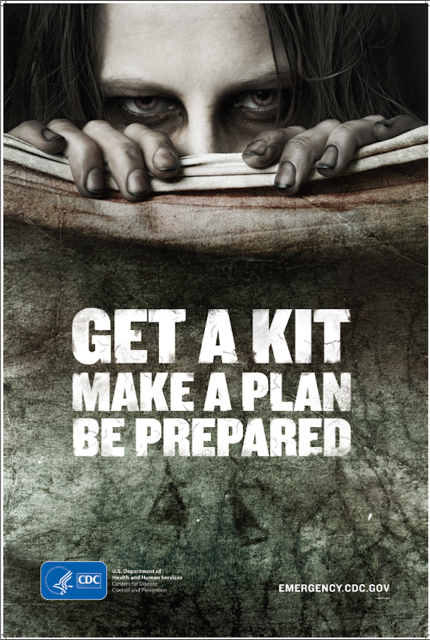 It builds off of the #1, hit TV show, The Walking Dead that films in Atlanta where the CDC is.

The show is about a zombie apocalypse and the story of how people survive (or not) amidst a global pandemic and the murderous awakened dead that feast off of the living.

Here’s a link with what the CDC recommends you have in an emergency preparedness kit.

The CDC also has a comic book with a zombie outbreak theme that further drives home the importance of a preparedness kit and what to have in it.

I think it’s great when government thinks outside-the-box in ways that appeal to everyday citizens to serve them, help them, and especially keep them safe from disasters.

I took my daughter for a flu shot last evening.

We went through the typical drawn-out paperwork and long wait to get something so routine.

When the medical practitioner finally arrived with the flu shot, there was a little baggy with all the acoutrements including alcohol wipe, band-aid, cotton, etc.

As the lady starts taking out the items to get ready for giving the shot, she drops the cotton on the floor.

She picks it up quickly, and pretending we didn’t see, she quickly throws it back on the medical tray.

Now I am watching…

She open the band-aid and places it at the ready on the side.

Then she get the syringe AND the cotton that had just fallen on the floor, ready in hand.

As she is about to give the shot, I say, “You’re not going to use the cotton on my daughter that just fell on the floor, are you?”

Her eyes look askance and she throws the cotton back down on the tray, and says, “Oh, of course not.”

I spoke with my daughter afterwards about this as it was hard to understand how a medical practitioner could on one hand, be administering a helpful medicine to a patient, and at the same time, was about to use a dirty cotton on the wound afterwards.

What happened to people actually caring about people and taking pride in the jobs they do, rather than just being in it for the paycheck only?

Healthcare.gov was rolled out on October 1.

Since then there has been lots of bashing of the site and fingerpointing betweeen government overseers and contractors executing it.

Some have called for improvements down the line through further reform of government IT.

Others have called for retribution by asking for the resignation of the HHS Secretary Sebelius.

Publication after publication has pointed blame at everything from/to:

– An extremely large and complex system rollout with changing requirements

And the answer is yes, yes, and yes.

Government procurement is complex and a highly legislated functional area where government program managers are guided to hiring small, disadvantaged, or “best value” contract support through an often drawn-out process meant to invoke fairness and opportunity, while the private sector can hire the gold standard of who and what they want, when they want, period.

Government IT is really a partnership of public and private sector folks that I would image numbers well in the hundreds of thousands and includes brand name companies from the esteemed defense and aerospace industries to small innovators and entrepreneurs as well as a significant number of savvy government IT personnel. Having worked in both public and private sector, I can tell you this is true–and that the notion of the government worker with the feet up and snoozing is far from the masses of truth of hardworking people, who care about their important mission serving the public. That being said, best practices in IT and elsewhere are evolving and government is not always the quickest to adopt these. Typically, it is not bleeding edge when it comes to safety and security of the public, but more like followers–sometimes fast, but more often with some kicking and screaming as there is seemingly near-constant change, particularly with swirling political winds and shifting landscapes, agendas, lobbyists, and stakeholders wanting everything and the opposite.

Government rollout for Healthcare.gov was obviously large and complex–it “involves 47 different statutory provisions and extensive coordination,” and impacted systems from numerous federal agencies as well as 36 state governments using the services. While rollouts from private sector companies can also be significant and even global, there is often a surgical focus that goes on to get the job done. In other words, companies choose to be in one or another business (or multiple businesses) as they want or to spin off or otherwise dislodge from businesses they no longer deem profitable or strategic. In the government, we frequently add new mission requirements (such as the provision of universal healthcare in this case), but hardly ever take away or scale back on services. People want more from the government (entitlements, R&D, secure borders, national security, safe food and water, emergency response, and more), even if they may not want to pay for it and seek the proverbial “smaller government” through less interference and regulation.

Is government IT a walk in the park, believe me after having been in both the public and private sectors that it is not–and the bashing of “cushy,” federal jobs is a misnomer in so many ways. Are there people that take advantage of a “good, secure, government job” with benefits–of course there are some, but I think those in the private sector can look in the offices and cubes next to them and find quite a number of their colleagues that would fit that type of stereotype as well.

We can learn a lot from the private sector in terms of best practices, and it is great when people rotate from the private sector to government and vice versa to cross-pollinate ideas, processes, and practices, but the two sectors are quite different in mission, (often size and complexity), constituents, politics, and law–and not everything is a slam dunk from one to the other. However, there are very smart and competent people as well as those who can do better in both–and you fool yourself perhaps in your elitism if you think this is not the case.

Are mistakes made in government IT–definitely yes. Should there be accountability to go with the responsibility–absolutely yes. Will we learn from our mistakes and do better in the future–the answer must be yes. 😉