Even when you fall down, you should always rise up again!

Best Chicken Lo Mein (Kosher too!) that I ever had.

At China Bistro and Sushi in Hollywood, Florida.

Order the extra chicken for a couple of bucks.

Steaming hot from the wok.

And don’t forget to make it extra spicy!  😉

Yes, I know you can’t eat it, but you can imagine what it tastes like.

Had this at L’Chaim Asian Cuisine and Steak House in Hollywood, Florida.

Absolutely to die for!

That was a lot of honey over the dark crispy chicken.

It’s been a few months and I still haven’t been able to get it out of my mind.

That is quite a recommendation I would say.

This bird was hilarious running into and out of the ocean waves.

Over and over again, it’s little puttering feet running toward and then just escaping the water rushing to the shore.

In a way, I thought that I’d like to be as playful and happy as this little bird running and having fun in the water.

But when I showed the video to my wife, she got a different message from it.

She said, “you can’t outrun the long arm of the law!”

The (jail)bird runs towards trouble, but then running away, the waves of justice invariably catch up with it.

I think with all the scandals in the news again lately from Hollywood to Washington D.C., we are all sort of stunned by the famous and hugely successful people who are now being caught up in inappropriate sex scandals and all sorts of abuse of women and men!

It’s wrong that these people use their wealth, fame, and power to hurt other people, period.

There are no excuses, no lapses of judgement, especially when it seems to happen over and over again to the same people.

Put your “package” back in your pants, and behave like upright human beings and not like a bunch of wild animals.

Yes, perhaps it’s one thing to be playful like the birds in the ocean waves, but it’s another to be part of the list of scumbags–if true as accused–like Anthony Weiner, Harvey Weinstein, Kevin Spacey, Louis C.K., Al Franken, John Conyers, and more.

You can pay off the women with jobs and settlements, but you can’t escape the rushing water of ultimate judgement for your unbridled play and tarnished souls. 😉

So Harry Basil was great at The Laugh Factory.

His costumes, impersonations, and audience involvement in his act was well done.

In the course of about half an hour, Harry spanned the gamut from Arnold Schwarzenegger to Leonardo DiCaprio, Eminem to Michael Jackson, and from Batman to Superman.

He was very animated and played with the people in the audience–so quick, spontaneous, and always in control.

This morning, I took this photo with Harry Basil at Starbucks.

As we started to walk away down the hall, my wife (who is wont not to take the greatest photos) says “Oh, I don’t think the picture came out, it was too close.”

And as we were going to start bickering, it was so funny…Harry pops up right behind us, and goes “Was it too close–let’s take it again.”

Another thing that happened that was interesting at The Laugh Factory, was when we were about to be seated, I said sincerely to the host “How are you doing this evening? Happy holidays!”

He goes to me, “No one ever asks me that. You know what? I’m going to give you seats right up by the front,” and he did.

It was a lesson for all of us about talking and treating people nicely–what goes around, comes around. 😉 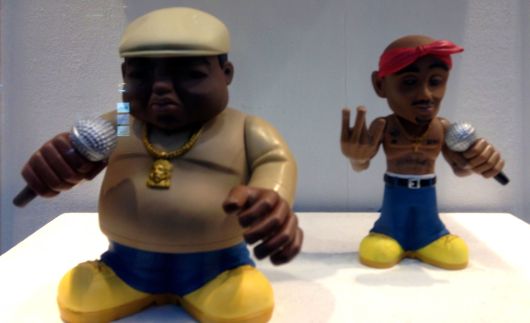 Management agents are not just for Hollywood stars anymore…

One such agent company is called 10X and they represent more than 30 IT stars.

The management agent helps the developers find jobs, negotiate salary and terms, and handle the paperwork letting the IT guys do what they do best–which is code!

10X takes a 15% cut of their client’s earnings, but some developers claim 2-3 times the salary they were earning before by using an agent–and rates are climbing to $300 an hour.

Some companies are using these premium talent coders until they can bring on a full hire or when they need some big guns for some special IT project.

Perhaps with agent in tow (and even without), IT folks will start to shed their outdated nerdy image and instead take on some real Hollywood glamour–for the talent they really do bring to the organizational table. 😉

My colleague at work has an incredible mask of the Predator.

Quite a frightening looking creature–that in Hollywood only Arnold Schwarzenegger could take on and defeat.

When Predator, an extraterrestrial, comes to Earth with all sorts of high-tech weaponry to challenge humankind, Schwarzenegger, who leads an elite special forces team, manages to defeat the alien by using his wits to improvise weapons, traps, and tactics.

In the real world, this mask is a great reminder that while technology is a tool that provides amazing capabilities, in the end, it is really our people’s ability to adapt and innovate that makes the ultimate difference as to who succeeds and fails.

The Predator mask is not only a great conversation piece, but Predator’s looks and technology is not so scary when we realize that good, talented people can wield control over it. 😉

This is a cool vision by Tom Clancy of the “future soldier” from the Ghost Recon game series.
The mixture of advanced weaponry, high-tech reconnaissance and surveillance, drones and robotics, future combat uniforms, and cloaking technology is just super.

If you have time and interest, there is another longer video here with footage that is particularly good starting at about the 3:40 marker.

Like Star Trek paving the way for real-life advances in technology and space exploration, Clancy’s future soldier will be another example of life imitating art.

When we marry the vision and creativity of our entertainment industry, with the technical skills of our scientists and engineers, and the risk-taking of our entrepreneurs, we can do truly awesome things.

“No one can do everything, but everyone can do something”–we’re in it together!

What does it take to spark creativity and innovation in the workforce, Hollywood style?

An article in Fortune Magazine this month (October 2011) presents how a top global Assurance, Tax, and Consultancy firm like Pricewaterhouse Coopers (PwC) is reaching out to its people to harness creativity through a new program called PowerPitch.

“PwC wants to cultivate a particular atmosphere. “We have an average age of 27, but we have roots in tax and assurance,” says U.S. chairman Bob Moritz, using the industry jargon for auditing and related functions. “Sohow do you make this place feel like a Google or a Facebook? A place that feels leading-edge?”

PwC is spurring innovation using an firm-wide contest format and social media to drive innovation for their $29 billion organization.

“An admitted fan of American Idol and The Apprentice, [Mitra] Best was drawn to the idea thatcontests and games could yield serious business results. Employees love the opportunity.”

The PwC program galvanizes a workforce into idea-generating teams, with proposals that are voted on and selected through an internal social media platform by all employees and others picked by a senior panel of leaders. Then the best ideas get leadership “advisors” who work with the teams to present to a top leadership committee. The best idea(s) win some nominal cash for the individuals on the winning team(s), and the proposals move forward with a “champion” to work with the team to actual launch.

PowerPitch is as PwC U.S. Chairman, Bob Mortiz, puts it “a [worthwhile] investment in time and money, but we needed to balance short-term costs against long-term sustainability.”

Nearly 800 ideas were submitted from round 1 and these were narrowed down to the top 25 for round 2 and then ultimately to 5 teams of semifinalists and a winning best proposal–however all five ended up deemed “worthy of investing in.”

And if even one of the proposals becomes the next $100 million line of business for the company, it will be more than worth the investment.

PowerPitch may not have Simon Cowell from American Idol to keep the competitors on their toes or Donald Trump from The Apprentice to say “You’re fired!”, but it has enough of excitement, morale-boosting, idea generation and widespread collaboration to keep an organization out front and advance their mission and workforce.