So coming back from vacation today was a tear.

We had an early flight–before dawn–and when we woke up, I called the town’s single cab company to confirm our early morning pickup (of which the reservation had been made the prior day by the front desk manager at the hotel).

When we awoke the morning of the travel, I called the cab company to confirm they were on their way.

A man picks up the cab company’s phone and says curtly:

– “I am the dispatcher and also your driver this morning.”

– “I have another person to drop off near your location and will be 15 minutes late.”

Upon which he just hangs up, and we readjust our schedule slightly.

Then I receive a text message 20 minutes early that says the cab is downstairs.

We rush downstairs, but there is no cab.

He says in a commanding voice:

– “Don’t you put the luggage in trunk, it can damage my computer [we don’t know what computer he was talking about].”

– “Shortest person sit behind me!”

We look at each other at how strange this cabbie is behaving, but again it’s the only “game in town.”

We get in the back seat, upon which he proceeds on the “dispatch computer” set up in the front seat to ignore us with mild apologetics and  works to handle calls, texts, and other people arrangements, while we are waiting in the back [already late because of his prior excuse] to get to the airport.

After what seemed like forever, he turns to me and says, “How are you going to pay?”

He says, “Yes, but the card reader may have interference at the airport [from this tiny airport, really?], and the ride will be 50 bucks!”

Realizing he was playing some sort of game with us to rip us off, since this was a meter cab, I try to explain that it seemed he was overcharging us saying “Well, we took a cab with you company from the airport just the other day and only paid around $40 and that was in a snowfall [today were clear skies and roads], so I’ll pay you the same $40.”

He turns angrily to me this time, and says threateningly, “You‘re trying to lowball me!  How about I just drive you around in circles and charge you by the meter even more?”

At this point, we could tell this guy was seriously off his rocker, and I try to deescalate this and ask, “Why are you giving us such a hard time with all of this?”

He seemed to calm down for a second as he was ostensibly trying to figure this out, and said okay, “We’ll do the meter [and you’ll pay]!”

Now we were running late to the airport, this driver had our luggage hostage in the trunk, and he has threatened us to take us for an unwanted tour of the city instead of to the airport and overcharge us or potentially even make us miss our flight altogether.

I looked at my wife and daughter and they were clearly understanding the danger we were in of losing the flight, luggage, and so on; but as we discussed later, they were afraid of even worse physical danger from this person.

He starts the car and with the dispatch computer screen still open [he angrily slammed open and closed the laptop multiple times], he drives on the highway while simultaneously, still working on dual duty as dispatch…we were terrified.

About halfway to the airport, he turns to me again, and says “Okay, I’ll turn the meter off [before] 40 bucks and you pay me 40!”

Afterward, my wife told me she thought he was going to pull over before 40 bucks and just drop us off somewhere in the middle of the highway.

I ask, continuing to try and calm this guy, “I don’t understand how can the meter be going higher than when we made the same trip in reverse in a storm just the prior week?”

Note, there wasn’t [barely] another car on the road and unlike in big cities, there was no signage with the driver’s picture, name, identification, etc.

He says, again in a threatening manner, “Oh I can also take the back roads to get you there cheaper, but you wouldn’t want me to do that, would you?”

Then he pauses, thinks again, and repeats, “Just pay me $40 cash {and he reaches to turn off the meter).

Soon after, we reach the airport terminal, and the taxi driver jumps out, dumps our [hostage] luggage on the side and holds out his hand.

I gladly give him the $40 and thank G-d that we are at the airport and safe.

This was really an eye-opening lesson about what can happen when you are in the car with someone and they are in total control over whether you get where your supposed to go, make it in time, get your things, and get out safely.

In these small towns, it is no help that the cab company is a monopoly and probably the dispatcher/driver is probably also a part owner and maybe even has friends at the local airport, hotel, police, and the courts, etc.

I don’t think for a second that we were his first victims, and hope that people reading this will help make this his last! 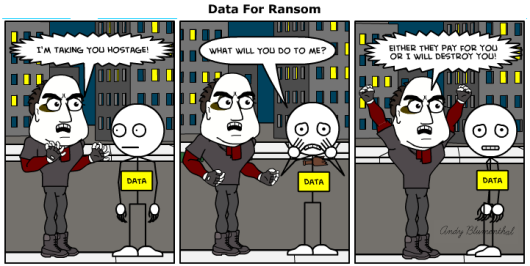 The future of cybercrime will soon become the almost routine taking of your personal and corporate data as hostage.

Once the hacker has control of it, with or without exfiltration, they will attach malware to it–like a ticking time bomb.

“I have your data. Either you pay for your data back unharmed OR your data will become vaporware! You have one hour to decide. If you call the authorities, you data is history.”

So how valuable is your data to you?

How long would it take you to reconstitute if it’s destroyed?  How about if instead it’s sold and used for identity theft or to copy your “secret sauce” (i.e. competitive advantage) or maybe even to surpass you in the marketplace?

Data is not just inert…it is alive!

Exposed in our networks or the cloud, data is at risk of theft, distortion, or even ultimate destruction.

When the time comes, how much will you pay to save your data?