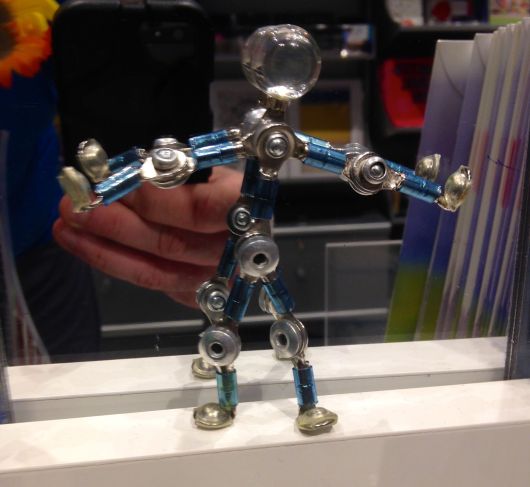 Don’t know exactly what it is about this little robot guy, but I really liked it.

The simplicity of the body and limbs joined by the connector joints and the head as just a clear crown on the rest.

To me, it looked relatively realistic as how robots of the future might actually look.

Humanoid, but so sleek that they are us but in many ways a step up from our aging selves.

Perhaps, someday the brains of humans and the bodies of machines will really come together in a better alternative to ourselves.

Living (indefinitely) longer and even pain free in bodies that carry mind and soul into the future.

This is a video of South African sprinter and Olympic hopeful, Oscar Pistorius–a double amputee fitted with curved, carbon-fiber prosthetic “Cheetah Blades” that can “challenge the fastest sprinters in the world.”

There was a fascinating article about this in the Wall Street Journal today (2-3 June 2012)–on how high-tech implants are being put in people’s bodies and brains, changing them from disabled to “superabled.”

The article explains how “the goals for many amputees is no longer to reach a ‘natural’ level of abilities, but to exceed it, using whatever cutting-edge technology is available.”

Last September, Tim Hemmes, paralyzed from a motocycle accident, was able to use a brain implant to move a mechanical arm, just with his thoughts!

“Technology can give us brains and brawn” and those with disabilities and the elderly who have lost mental and physical capacities will be early adopters–“they have a lot to gain and are willing to face the risk inherent in new medical technology.”

There are many ethical questions when it comes to human implants–especially when it comes to the possibility of people voluntarily substituting technology for healthy body parts–just to have the Steve Austin-like, Six Million Dollar Man, bionic capabilities.

Another question is once we start replacing our body parts–our very selves–with technology augmentation, at what point do we stop being us?  And at what point, do we potentially stop being human and become something else–half human, half machine–or even more machine than human?

Like the mythical creature, the centaur, which was half man and half horse–it seems like humans have always wondered about what makes them who they are and ultimately what they might become if they try to co-exist or meld with something altogether different.

By combining technology into our humanity, we are becoming something different–maybe a super human, if we use it ethically and for the good. Or perhaps we may become something more malevolent, if we go on to abuse our superabled powers to dominate or otherwise harm those less souped-up than us.

Only time will tell where technological implantation and human augmentation ultimately takes us–it holds both enormous promise that we need to leverage and frightening risks that must be carefully planned and managed.