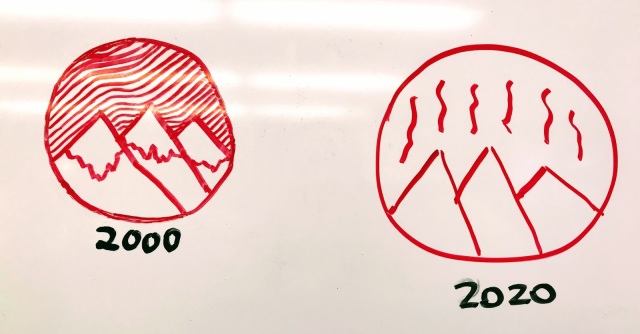 I love when people can communicate through pictures effectively.

Truly, a picture is worth a thousand words–probably more.

This was a simple drawing to depict I assume global warming.

It’s like the person didn’t have to say a word.

Also, I know there is supposedly a lot of scientific evidence for global warming.

But for me personally, I don’t see it or feel it.

The summers, if anything, feel cooler and the Winters feel colder to me.

I know that is anecdotal and not representative of the world.

However, it is hard to reconcile what the scientists say, when your own eyes aren’t seeing it.

Granted, I’m not in Alaska where, for example, the glaciers are melting,

Still wouldn’t we be feeling something here?

I guess time will tell us for certain.

Hopefully, by the time we do see it, we won’t get run over by the speeding train.  😉

So new leaders frequently want to come into town like a knight in shining armor riding speedily on their white stallions to “save the day.”

Being new and needing to prove themselves, change and quick results are the imperative.

The problem is that fast, quick wins can be mistakenly and superficially achieved while sacrificing longer-term organization success.

We push people to hard, too fast, and without the underlying care and emotional feeding to duly support the rainbow in the sky changes being sought.

People are human beings that need to be brought along in a unified manner and with a solid infrastructure and not plowed over for the sake of some short-term gains.

You can push for change so hard–you can crack the whip and you can demand what you want when you want–but rest-assured that you are leaving a great pile of destruction in your wake.

Performance results are built by maintaining a sane balance between change and stability–pushing others to do more with less has to be replaced instead with getting out front yourself and pulling the organizational weight at a measured pace so that workers aren’t trampled by the raw, unbridled ambition of the leadership.

You may have a great scorecard of accomplishments, but they may be the tip of what is otherwise an iceberg of discontent and disaster beneath.