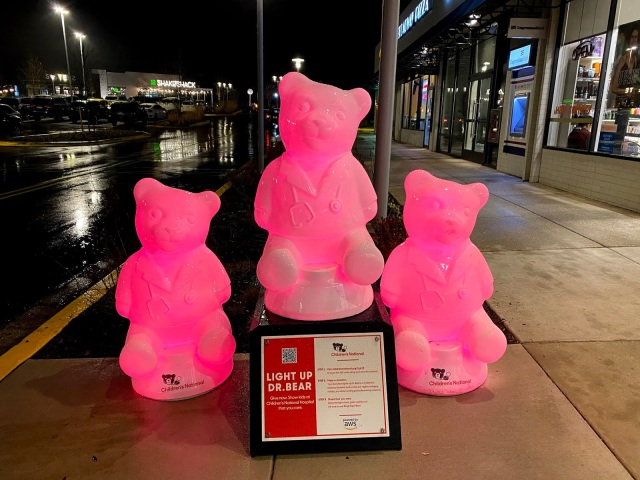 Thought this was a pretty good display with the Three Bears for holiday donations for Children’s National Hospital.

While it gets your attention (who sees three pink bears lite up on the street at night?), asking people with a small impersonal sign on the floor to remember to login and make the donation later isn’t very effective.

People act on the spot, especially when it’s an emotional appeal for charity for sick children that need help.

The children deserve for there to be a way for would be donors to actually give on the spot–where they can swipe or tap their credit card, write a check, or drop some money in for giving.

Later, later, later…and unfortunately, it may never happen for the Children.

Come on–it’s the new roaring 2020s–we can create some urgency and convenience and do better than this!  😉

Discovery Channel has a series called Future Weapons.
This is part 1 from Israel and Richard (Mack) Mackowicz, a former Navy SEAL show us “The SIMON.”
SIMON is a high-tech, advanced rifle grenade for breaching virtually any door in hostile environments.
It is made by Rafael, one of the largest and most innovative Israeli arms manufacturers.
SIMON is in use by both U.S. and Israel armed forces.
Essentially, a bullet-trap slides over the muzzle of a conventional assault rifle like an M-16.
A regular bullet propels a grenade up to 30 yards into a door, and the blast wave from the detonation breaches the door and any locking mechanisms–with minimum collateral damage and keeping troops out of harms way.
Breaching doors in urban warfare is one of the most dangerous tasks in any mission as troops may be walking into anything from the spray of gunfire to booby traps.
Well as Mack says: “SIMON says open door;” It is an “instantaneous key to any door.”
What I like about SIMON is the combination of its simplicity and effectiveness.
On one hand, it works with conventional rifles and bullets and is light and compact to carry. It’s as simple as slide, aim, and shoot–and the door is breached for troops to enter and either rescue hostages or get the bad guy.
With whatever technology we are building–whether computers or weapons–they need to be user-centric and mission focused.
Israel has a history of innovation–everything from defense to medicine and making the desert bloom–and I think this has to do with that their survival is constantly imperiled.
The lesson is that we ought to recognize the dangers out there and respond to them with immediacy and vigor, as if our lives depended on it–because in many cases, they really do.