Despite the enlightenment of everything technology has to offer, we are as a global society, in many senses, living back in the Dark Ages again.

Unbelievable terror and killings have become routine and yet we have become deaf and desensitized to it.

– Besieging of cities…how about a short truce to let in some much needed humanitarian aid?

– Beheadings on YouTube…already so cliche.

– Burning people alive in cages or crucifying them…grotesque, but what were they doing there anyway?

– Stoning women for being victims of rape or simply for some trumped up charges…sluts, they must’ve deserved it!

– Raining missiles down on cities and digging terror tunnels under borders…well their aim isn’t so good and the tunnels took them a lot of hard work.

– Bombing and shooting up pizzerias, cafes, clubs, hotels, stores, buses, weddings, funerals, and houses of worship…what can you do–it’s a cycle of violence!

– Hacking off limbs, axing and stabbing attacks… of course, a legitimate airing of grievances.

– Flying airplanes into skyscrapers…it was a plot for the Crusaders to invade our lands.

– Building nukes and other weapons of mass destruction along with ballistic missiles, drones, and suitcase bombs to deliver the payload…well, you can’t put the knowledge back in the bottle!

Are we just war-weary, being lazy, fearful, hiding out and putting our heads in the sand for a while, focused on other pressing domestic issues, pivoting east, in need of a better strategy, rooting for and helping the other (wrong/evil) side, a little delusional as to our own national and homeland security here, or perhaps, have some seriously gone off the (rational) deep end?

How do we explain this type of insane, immoral world to our children and is this really the type of sick and treacherous world we want to leave to them?

Oh yes, it’s so comfortable and cushy where we are–there is nothing for us to worry about–or is there? 😉 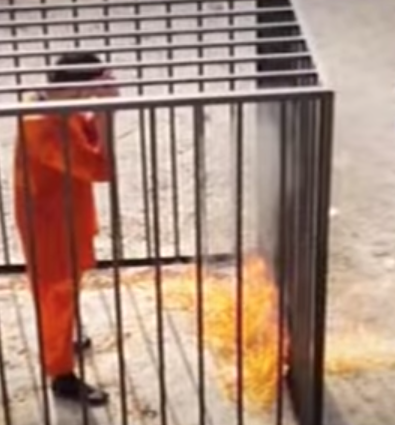 ISIS is one of the most brutal and uncivilized enemies that we are now facing.

Their tactics against their victims have included:

Similar to Iran who threatens nuclear Armageddon on the West, and we seek to pacify them, make agreements, and unravel sanctions against them, with ISIS, our response again in the face of evil, has been tepid and now we are making excuses for their completely sick and immoral behavior.

At a National Prayer Breakfast yesterday, the President stated:

“Unless we get on our high horse and think this is unique to some other place, remember that during the Crusades and Inquisition, people committed terrible deeds in the name of Christ.”

Yes, that is why those times in history are referred to as “The Dark Ages,” while in 2015, we are supposed to be a shining light of democracy, freedom and human rights.

The President also went on to cite Slavery and the Jim Crow [laws] as other examples.

Hmm…interesting though, if you are going to cite examples already, why completely omit to mention the evils of the Holocaust that killed 6 million Jewish people in the most inhumane genocide of our times–just 70 years ago!

Then again, what was the purpose of giving the examples that he did of other great historical misdeeds (and also leaving out other prominent ones) in the face of another great evil in our times.

From the specific words, perhaps:

– It is to excuse it? (Get off your high horses)

– To give them some sort of pass?  (Other people have committed terrible deeds)

But should we be making excuses or giving a pass to ISIS and for that matter Iran (which has one of the world’s worst records of human right abuses and has threatened to annihilate Israel and attack America) for their ongoing brutality, immorality, threats and terror?

Maybe what is correct here is that we should “get off our high horses,” and INSTEAD finally consider putting some darn boots on the ground and some serious firepower with it to end this march of terror quickly, rather than excuse it, ever. 😉