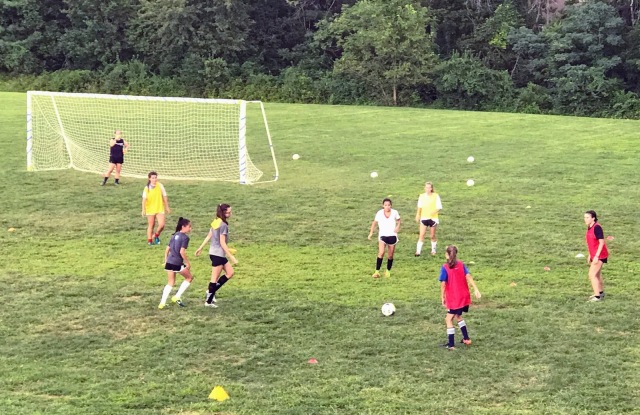 Yesterday, dozens of wealthy parents were charged in a pay-to-play scheme.

But while some people pretend to be so shocked that this is going on, the truth is that we all know that it’s definitely not a level playing field.

All I have to do is drive by the local Mansions in Potomac, Bethesda or Chevy Chase, Maryland or in Northern Virginia and see the extravagant homes, schools, shopping, and neighborhoods, and you know there are the forever haves and the have nots.

If you are born with a silver spoon in your mouth in the U.S., the chances are you will stay that way.

Having the assets, information, connections, and opportunities seems to bode quite well for those who leverage it.

The worst part is that those who have these things often really believe that they are better or more deserving than others.

Can you see the nose elevated and those snooty eyes staring down on you?

Wealthy parents cheating the system and paying off others to get their kids into the best schools–a surprise?

What the real surprise here is…that this time, they got caught.  😉 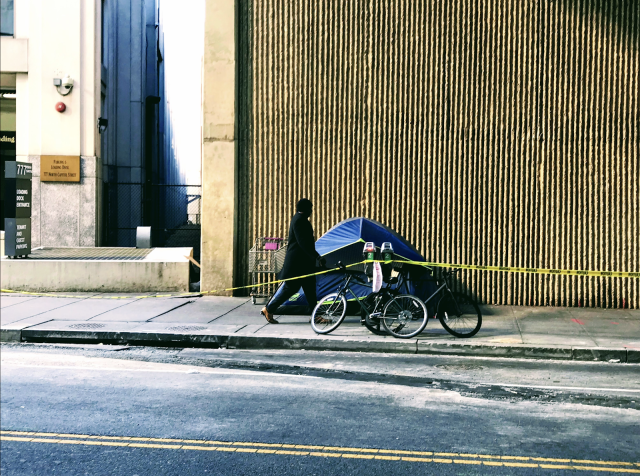 So the plight of the homeless in Washington, DC and other large cities like NY and LA is despicable.

This photo is taken not far from the Capitol building in DC.

The homeless are not living in tents in the dead of Winter.

As the people pass by, under this particular overpass were no less than 4 tents.

While millionaires and billionaires splurge on themselves, so many people continue to go without adequate food, shelter, clothing, plumbing, healthcare, education, and jobs in America.

When G-d looks down and see the unsympathetic wealthy next to the downtrodden poor–and many of the wealthy act like insatiable pigs, while the poor go hungry and cold–shall the L-rd that judges all the earth not do justly?

Yes, there should be incentives for people to work hard and contribute, but when the wealth is skewed so that more than 50% of all the wealth is owned by just the top 1% of people and the top 1% own more than the bottom 90% of the population–we have a system that is not just broken, but grossly unjust and inhumane.

Corruption is alive and well, and who is there among our leaders to stand up and say and do what is right by G-d children? 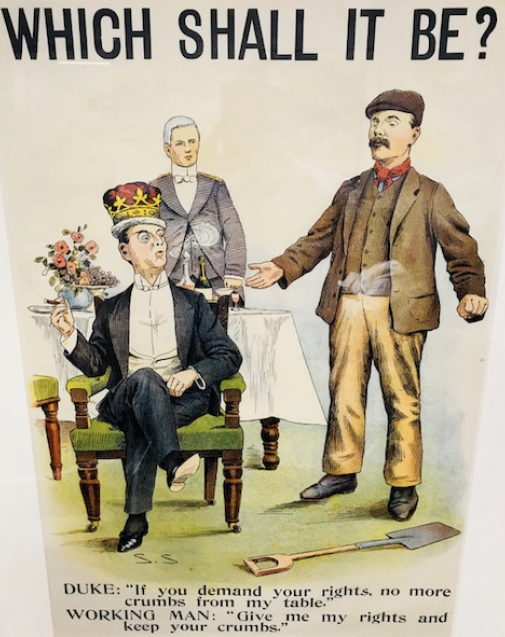 Since the days of slavery, workers have had very little in terms of rights or protections.

The rich and powerful capitalist employers hold all the cards.

“Which Shall It Be?
Duke: ‘If you demand your rights, no more crumbs from my table.’
Working Man: ‘Give me my rights and keep your crumbs.'”

The capitalist owners enjoy being able to give “trickle-down economics” to the average working man.

And if you don’t like it, and you want rights, protections, and more…tough luck, and no more crumbs for you!

But the little guy who breaks his back to earn his daily bread, wants his dignity and respect more than the crumbs from the “capitalist pig” taking advantage of him.

Crumbs aren’t going to raise the standard of living for the working class.

We need living wages, social and income equality, and workers rights and protections to keep the little guy from being bulldozed by the rich and powerful.

Certainly, there are many rich and powerful people that are good and generous, but not everyone is that that way.

And we can’t have mistreatment of people by those wielding a whip over them.

Yes, workers need to perform and conduct themselves professionally–that is their job.

But workers shouldn’t be taken advantage of with poor wages, little to no benefits, and miserable working conditions (including bullying, harassment, and hostile work environments).

Remember that in life tables can get turned and the rich and powerful can become the poor and the weak.

Therefore, pay and treat your workers as you would want to be paid and treated.

No one is so big as to be untouchable by G-d.

Money and power will not save anyone from illness, accidents, disasters, and misfortune.

The only thing that does save people is good deeds, kind words, compassion, faith, and prayer. 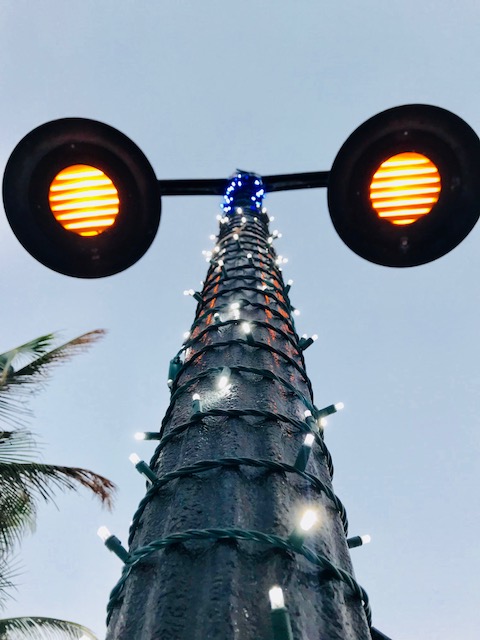 So I like to speak with people about their lives.

Today at breakfast, there was a gentlemen working the egg bar making omelettes for people.

Recognizing him, I said “You’ve been here a number of years?”

He responds, “Yeah, but I want to leave here!”

I was sort of taken aback at his bluntness, and inquired further, “Why, is everything okay?”

I asked innocently, “Do you have a second job or something?”

He says, “No, this is it,” and proceeded to make the next person’s omelette.

Feeling sort of shitty bad for him…

Another lady who works the tables says to us: “I won’t be seeing you.”

She says, “No, I don’t come back until next Saturday–I only work the weekends here, and somewhere else on weekdays.”

Wondering about this, I say: “So you work 7 days a week?”

After we said goodbye until next time, I looked at my wife grimacing that this women has to work 7 days a week, 365 days a year, just to earn a basic living.

I’ll tell you the system is broken.

Shareholders and corporate chieftains squeeze profits and earnings per share out of their companies while the workers can barely get by.

The workers are not part of the companies they labor for–they are merely hired hands who will be replaced in a moment by another minimum wage worker if they but open their mouths to protest one word.

Slavery did not end in building the Great Pyramids of Egypt or in the plantations of the South–the average worker is still just a slave.

Employee engagement and development and “Human Capital” are terms organizations use to make themselves and their workers believe that there is real caring and unity going on.

But we know the truth by how people are treated with harshness, disrespect, disdain, and even abuse–sexual and otherwise!

Yeah, are you really valued or are you a wage slave showered with empty platitudes of unity and caring.

Real leadership is genuine compassion, empathy, and helping people both inside and outside the organization–not just a guise, disguise, mask for making just another dollar cracking the whip on the backs of the underclass.

All people are important.

All people deserve a living wage.

All people are entitled to work with dignity and respect.

All people need to be apart of a system that is fair and equitable.

Care for your brothers and sisters for one day you will be called before them in the court of Heaven and they will speak the final truth to power. 😉 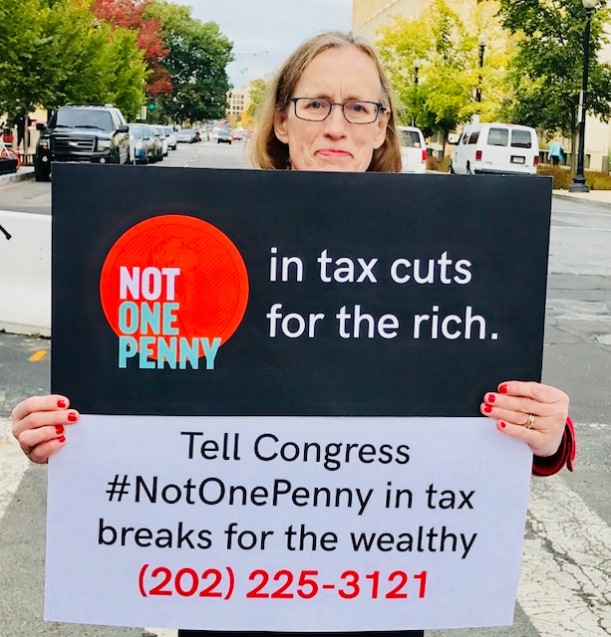 So I ran into this lady in downtown Washington, D.C.

She posed for the picture and made sure to line up the top and the bottom posters to get it just right.

“Not One Penny In Tax Cuts For The Rich”

Any more pennies in their war chest is sort of a drop in the billionaire bucket.

With tax reform is on the table now…we need tax relief for the middle class and to grow the economy.

The rich really do not need to get any richer.

Especially with a national debt over $20 trillion already–and not including future entitlement obligations that exceed projected revenue for social security and medicare, which bring the debt in excess of $70 trillion!).

The gamble with this whole tax reform plan is that the $1.5 trillion or so in proposed tax cuts over 10 years translates into a much bigger economic expansion that makes up for that revenue loss to the government and more.

If not, well then Uncle Sam bet wrong and our annual deficit gets bigger and bigger (already $666 billion in FY 2017).

Tax cuts for the rich today and estate tax cuts to pass wealth between generations–when they impact the top 1% are ridiculously targeted to those who really don’t need it, and many of the decent ones, like Warren Buffet, don’t even want it.

Let’s have a heart and help the people that really need the help–let’s narrow the growing divide between the haves and the have nots, and move to eliminate the class system that elevates one child of G-d over another.

– While some live in McMansions, others are homeless.

– While some eat steak and drink expensive bottles of wine every night, others go hungry and thirsty.

– While some wear fancy designer clothes, expensive jewelry, and different outfits every day, others don’t have a clean shirt on their back.

It’s nice to think that some “deserve it” more than others, but we also have to think who really needs it more.

And if the pennies do ultimately come from Heaven (as all blessings do), then let us distribute these with compassion and lovingkindness as we know our Creator would want us to. 😉