Remember before Coronavirus when times where a little more innocent…

When we didn’t have to worry about viruses spread by eating live or wild animals or that “escape” from weapons laboratories.

It’s good to be a little nostalgic.

Interesting set off toys found in a silver pan tray.

A couple of dogs, some Play-Doh, a crayon, and a fighter plane.

Off to the side (not pictured) are the Legos.

Interesting with what competes with video games and phone apps these days.

Frankly, there is still a lot to be said for the creative play of yesteryear. 😉

So I’ve been wanting to post this example of this special art form from my daughter, Rebecca.

She makes this novel art called, “EMO”, which stands for emotional.

In this art she mixes children and monsters–and it depicts how innocent kids have to deal with the monsters they find in an often unscrupulous and morally-tarnished society.

I love the feelings and message of this art in that it encapsulates how children enter this world in purity, but how so many bad people and things around them (and us) can corrupt that.

I always learned that the goal for each person was to leave the world a better place then the way we found it; however, I think a more personal goal should also be for us to leave here as better human beings than the day we arrived.

Challenging ourselves–learning and maturing–yet at the same time keeping that essence of decency and integrity of mind, heart, and deed–that is a life where we can grow up, but not turn into the morally-bankrupt monsters that we see all around us.

Thought this was an absolutely amazing and spellbinding photo of a bird peeking out from a bush.

The bird seemed to cooperate.

It reminds me of a baby gestating in it’s mother’s womb, so content, so sheltered.

Not quite ready to come out into the real world, but snug in place, yet observant.

Too soon to be contemplating next steps in the complex world outside its immediate cozy shelter.

Perhaps, there is a part of us that craves that simplicity, innocence, and existence sheltered from all the bumps and bruises.

Oh, to have such peace of mind and spirit, absent heart-wrenching day-to-day dilemmas we face.

Like a bird nestled in a bush looking out with that simple wonder and purity of life itself. 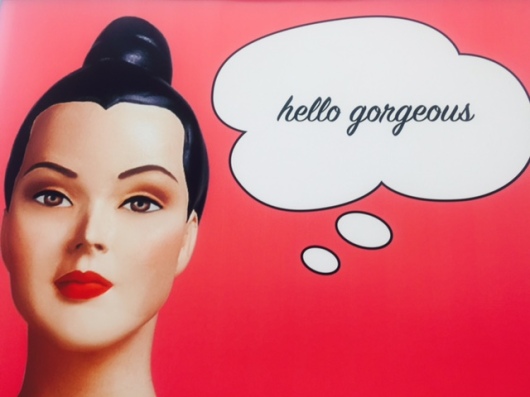 So in the office, one person says to another that they need to have a meeting to catch up on some things.

The other person is obviously very busy, and so the first person trying to accommodate and be mindful of people’s time says, “We can do a quickie.”

At which point, the kindergarden personalities take over in the office, and the person responds cracking up, “I am begging you never to say that again!”

It funny how despite people growing up on the outside (in years), people are still always sort of just kids on the inside.

Maybe in a way that is a good thing that part of ourselves retains the carefree innocence and jovialness of our youth.

We may not be sooo gorgeous anymore, but we are still the same person on the inside–just a little more experience behind us. 😉

My elderly father retold a funny joke to us yesterday when we visited him at his assisted living home.

A teacher in school asks the classroom of children, “Who killed Abraham Lincoln?”

One little child in the front of the room meekly raises his hand, and when called on by the teacher answers,”I didn’t do it!”

The teacher is taken aback at the response, and after class calls the child’s father and tell him to come in after school to discuss this.

After school, the father shows up and sits down with the teacher, and listens to him repeat the story about what happened in class.

Ah, I suppose one could take this as a sad commentary either generally-speaking on the state of our education system or in particular of this family that is quite clueless–and where it’s clear that the apple does not fall far from the tree. 😉 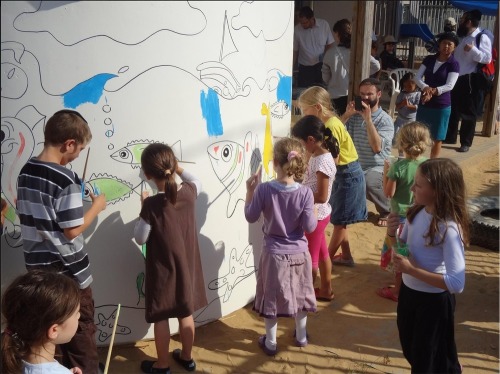 I came across of photo from United With Israel, a global advocacy group, taken in Nitzan, Israel.

Nitzan is home to about 600 families, mostly from Gush Katif, where more than 8,600 residents were evacuated and their homes demolished in Israel’s unilateral disengagement from the Gaza Strip in 2005.

Now living in temporary plaster shelters in Nitzan, just north of the city of Ashkelon, these residents live in constant fear of terrorist and rocket attacks.

Two bomb shelters for their kindergarten classes have been erected.

In this photo, the children are painting murals on the bomb shelter.

It is heart-wrenching that little school children should need bomb shelters to hide in, because they are being targeted by deadly attackers.

What type of world are we living in?

The colorful pictures of water, fish, sand, starfish, clouds, and more is beautiful and serene in the face of the fear these children must face daily.

I have never seen a children’s mural on a bomb shelter, but am grateful for the spirit of these kindergarten children to stand up in the face of evil.

The L-rd “who watches over Israel will neither slumber nor sleep.” (Psalm 121)

May these precious children sleep a little better under the protection of G-d and their new bomb shelters.