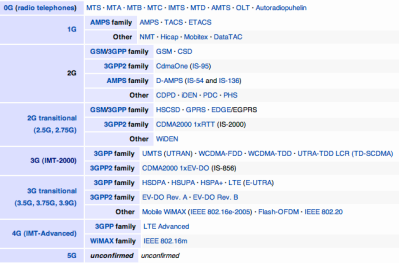 There is a huge need for speed on our networks—as we demand the latest and greatest download streaming of books, movies, games, and more.

While 3G standards require network speeds for voice and data of at least 200 kbit/s, the 4G-performance hurdle jumps (500x) to 100 mbit/s.

The chart from Wikipedia shows the various standards and how they have evolved over time.

What are interesting to me are two things:

1) Network carriers that are competing for your business are already boasting 4G deliveries even though they do not meet the standards set out by The International Telecommunication Union (ITU), an agency of the U.N. According to Computerworld (22 November 2010), the 100 mbit/s standard is “about 10 times the performance that any carrier…can offer today.” Moreover, technologies such as LTE-Advanced and WiMax 2 that are expected to be 4G complaint aren’t “expected to go live commercially until 2014 or 2015.”

2) While the carriers are touting their various breakthrough standards, most people really have no clue what they are talking about. According to the Wall Street Journal (4 November 2010) on a survey by Yankee Group that “of more than 1,200 consumers found 57% had either never heard of 3G or didn’t understand the term. [And] With 4G, the ranks of the confused jump to 68%.”

In the first case, we need to keep in mind the principle of caveat emptor (or let the buyer beware) when it comes to what the Wall Street Journal is calling the “increased rhetoric underscoring the high-stakes games played by the carriers as they jockey for position.”

In the second, vendors and technologists should understand that they are losing the consumer when they talk “techno-geek.” Instead, all need to use plain language when communicating, and simplify the technical jargon.

The comic in Computerworld (22 November 2010) summarized it well with pictures of all the various GGGG… technologies and the people next it to it saying, “At this point the labels are ahead of the technology.” Of course, I would add that the labels are also ahead of most people’s ability to understand the geek-speak. And we need to fix the communications of both.