Here is a link to the modeling for Covid-19:

You can click any state to see the impact of 3 months of social distancing or 3-months of Shelter in Place.

Basically, it looks like this first round of coronavirus will last until around the beginning of June.

The hope is that we can keep the hospitals and medical system from being overwhelmed while we try to come up and test an effective vaccine.

Of course, vaccines are helpful, but look how many still get the flu every year because viruses mutate and the vaccine misses the mark.

Also, there is a risk that the virus comes back even more virulent again, so we all need to continue to pray! 😉

(Thank you to my sister for sharing this with me.) 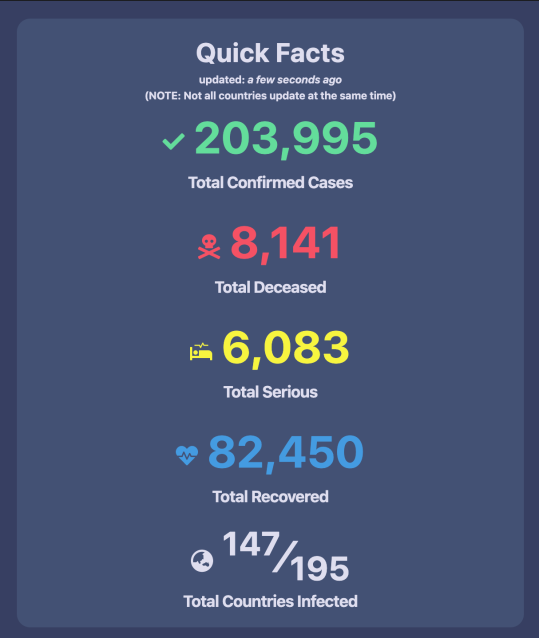 Developed by a 17-year old Jewish kid from Seattle.

There is a page for data by continent, country, and state.

And another tab with an interactive map of the cases.

Also, a page of useful information from The Center for Coronavirus Information.

The information updates every minute by scrapping information “from reliable sources from all over the world.“

I think it would also be helpful to add an aggregator of top news stories on the Coronavirus.

I find this to be a very simple, straight-forward dashboard to keep up with the developments of this virus.

(Credit to Minna Blumenthal for sharing this with me)

I love this map by Heinrich Bunting, a German Protestant pastor and cartographer.

This beautiful artist and thoughtful map was published in 1581.

It shows the 3 continents of Europe, Asia, and Africa as 3 leaves of a clovers with Jerusalem at the center.

Jerusalem, Israel is the focus, nexus and crossroad between these 3 worlds of Western, Asian, and African civilizations.

Israel is so multi-cultural and holy to the 3 major monotheistic religions of the world (Christianity, Islam, and Judaism).

Light, healing, peace, and prosperity should emanate from Jerusalem to the whole world and G-d should bless us from his heavenly abode.  😉

So how do we know that Obama, Kerry, and the UN’s position and resolutions against Israel is biased, hateful, and Anti-Semitic?

Let’s briefly look at the 6 ludicrous principles–as applied to the United States and it’s settling the land of the Native American Indians.

– The realistic solution would not involve a return of the Native American Indians to East America, but would involve compensation.

Hmm, how much do we realistically owe the Native American Indians for half the country?

Uh, what does that mean, especially with our estimated 11.4 million illegal immigrants in the U.S. already???

– For the U.S., “this must bring broader peace” with South American neighbors (including Mexico, Cuba, Venezuela, etc.) and would allow “groundbreaking” security partnerships with others like Russia, China, Iran, and North Korea.

Wonder how that would all work out, huh???

The main difference between the U.S. and Israel is that actually Jews were promised the land of Israel by G-d him/herself and the Jews have actually lived and worshipped there for 4,000 years!

If Obama, Kerry, and the United Nations want to lecture on a Two State Only Solution, perhaps they need to start by contacting the Native American Indians and getting out their drawing boards. 😉

(Source Graphics: By Andy Blumenthal adapted from here and here) 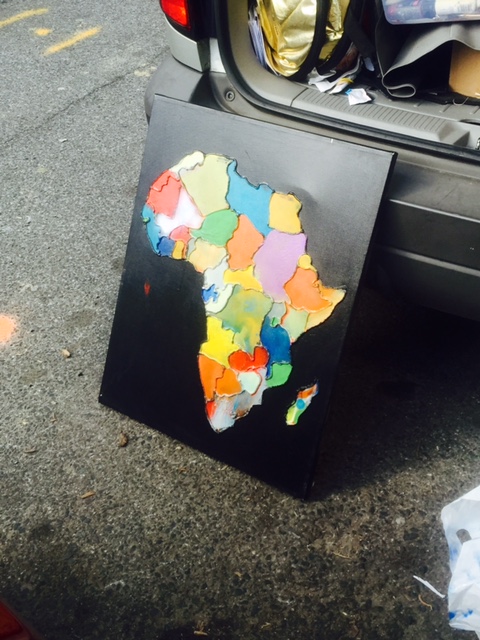 So not what you’d expect from the back of someone’s car.

But this guy is selling some pretty nice artwork.

This piece is obviously a colorful painting of Africa.

I took this photo, and the guy popped out of nowhere yelling, “Hey, why you taking a picture of that?”

The guy gives me a funny-grouchy face as I am walking away, and then another guy who is panhandling on the street goes to me, “You know you’re right, those really are very beautiful!

So we can all appreciate nice artwork even from the back of a car on the sidewalk of Washington, D.C. 😉

The U.S. is driving forward toward a looming deadline for a deal with Iran, so they don’t go nuclear (on us).

But with this deal, Iran does go nuclear!

The question then is who is this non-deal of a deal for?

Usually one makes a deal that is good for you, your team, your allies, your friends, your community–that’s why you’re making the deal…otherwise why bother?

In this case, no one has more to lose with a (very) bad deal than Iran’s neighbors in the Middle East, so they are actually very good judges as to whether this is a good deal or not, right?

If it’s a good deal that safeguards them, the region, and us–wouldn’t they all be jumping up and down doing the Horah?


But they are not–and far from it!

PM Netanyahu was extremely clear and got 23 standing ovations in just a 40 minute speech explaining how kicking the thermonuclear can down the road ten years does not a non-proliferation agreement make with a homicidal terrorist regime like Iran.

Similar, today again it is reported that “America’s other key allies across the Middle East–such as Saudi Arabia, Egypt, and the United Arab Emirates–are just as distraught.”

And the same reason that they don’t like this deal is why we shouldn’t like this deal–because it doesn’t accomplish the goal of safety and security for this region of the world or for us from dangerous Iran.

In this case, where a no-nuke Iran was what was committed to, instead we are getting, at best, a temporary deal with Iran that leaves them their nuke infrastructure and capabilities, as well as the legitimacy to ultimately have their nukes and make us eat it too!

So perhaps it is understandable why Netanyahu came here to speak to the U.S. Congress about what this dangerous “deal” is turning into and means to the very country that has been threatened by Iran with extermination.

And why a prominent Emirati political commentator said, “A lot of the Gulf countries [our traditional U.S. allies] feel they are being thrown under the bus.“

Hmm, perhaps rather than playing right side/left side of the aisle politics, we should be asking some common sense questions:

1) Why would anyone and why would we in particular want a deal that doesn’t accomplish the goal of stopping the terrorist Iranian regime from getting nuclear weapons of mass destruction?

2) Why would we desperately seek a deal that doesn’t safeguard us, and our allies, and where the common refrain is that no deal is better than this deal?

3) Why would we be pushing to lift sanctions on Iran that has threatened us and our allies with everything from raping the President’s daughter to sinking the U.S. Navy to annihilating Israel instead of clamping down on these terrorists?

You know the famous saying that when something smells fishy, it usually is.

This deal makes no sense–and our allies in the Middle East know it, Congress knows it, and if you don’t let partisan politics get in the way, we all know it.

That means that as Iran is now aggressively spreading it’s influence and forces across a contingent land sphere including Iraq, Syria, and Lebanon, there is some ulterior motive at play here–should I draw you a map? 😉

Now flowcharts are being used to build and link reusable programming code.

NoFlo or Flow-Based Programming (FBP) simplifies application development by using libraries of pre-written code and then dragging and dropping them into your process flows.

This leverages objected-oriented programming (OOP) and uses modules of open-source code, which are linked together to create a full program that solves a business problem.

These flowcharts can not only be a collaborative tool where developers can build or map code, but can also be part of the systems documentation that ensures a higher-level of understanding of the total programming solution.

NoFlo raised over $100K on Kickstarter in 45 days in order to advance this project from Javascript to iOS, Android, and Python platforms as well.

To me, this programming paradigm seems to have real legs:
– A process-based model for decomposing solutions
– Simple information visualization through a common flowcharting toolset, and
– Reusable object code from programming libraries in the cloud.

This is a beautiful lithograph from Currier and Ives that I came across of Washington D.C.

It is called Chesapeake Bay Area – The City of Washington.

It’s amazing how much less developed things were just a little more than a century ago.

You can clearly see the major landmarks and institutions like The Capitol, the Washington Monument, and The White House, but not much else in terms of government.

Notice that even the Supreme Court building isn’t there–it wasn’t completed until 1935.

We are a fast-growing and advancing society with a maturing government and capital city that today makes this historical photo look almost as if it’s from fairy tale.

It’s nice to look back and see how far we’ve come and introspect on where we are going. 😉