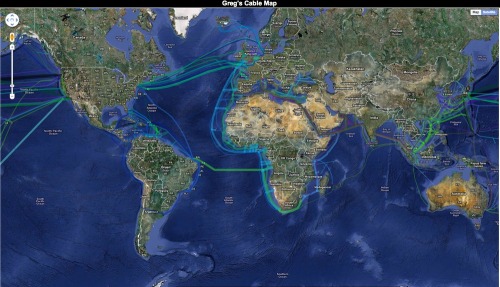 Coming across Greg’s Cable Map–I thought this is sort of idiosyncratic, but fascinating too.
This is an interactive map of our global undersea telecommunications infrastructure.
If you ever wondered how you were able to connect with someone anywhere in the world in split seconds (satellites aside–since we all don’t have immediate access to that), here it is.
How it works: Either you can search the list of cables of the right, click on any one of interest and it highlights it on the map for you or vice versa click on a telecommunications link on the map and it bring up in the right-hand column the points of the cable landings and reference to more information .
Another cool feature, is the ability to display the telecommunications infrastructure from before, during, or since any period of time–so you can get a historical perspective of what the Internet for example looked like or didn’t look like only ten or fifteen years ago. Can anyone say carrier pigeon?  🙂
There is also the ability to click on the bottom of the map on the check boxes for either or both the active or future cable links to see where we are now (“as-is”) and where we are going (“to-be”) in terms of Internet connectivity.
Next time you read in the newspaper about a large-scale Internet outage like the multiple ones that occurred when undersea cables were cut in the Mediterranean in 2008 causing outages from the Mideast to India, you can look it up here and see for yourself how “the foot bones connected to the ankle bone.”
Enjoy and have a good weekend!

I came across this interesting Social Network Map (Credit: Flowtown).

We are all part of and participants in social networking, and are genuinely hooked on it.
(Even going so far as the guy who was tweeting about his Continental flight plane crash in Denver in 2008.)
But sometimes it is hard to figure out what is going with all the social networking tools out there.
Hence, I find this 2010 map a very interesting visualization that sort of sums it all up.
The social lands are sized by number of users–hence Facebook looking like the goliath out there with 500 million users (now up to 600 million already!) surrounded on either side by Friendster and Twitter (with approximately 115 million users each).
Beneath Facebook are the “Volcanic Islands of iPhone Apps” (and add to that the Android Apps)–and with their explosive growth these are truly volcanic.
On top, you have the land of defunct social networks like a bunch of fallen Yahoo properties, along with the “Receding Glaciers of AOL and Windows Live” as well as the “Former Kingdom of MySpace”–together these are essentially the equivalent of the Siberia of the social map.
On the bottom, you have the “Empire of Google” (sounds a little foreboding with a ring of Darth Vader to it) plus there is what was then the up and comer, the “Rising Island of Google Buzz”.
Near the “Sea of Desperation” is Match.com–that’s funny.
Then there is a pretty sizable Island for YouTube with the “YouTube Triangle of Viral Videos”–plenty of those and now they are competing with the Networks and Cable.
And on the Right is LinkedIn for professional networking and a whole “United Territories of Wikipedia”–hey, the Encyclopedia of the web deserves it!
There are many more familiar sites like Digg, Flikr, and don’t forget Blogger— a personal favorite. 🙂
The Strait of Bing is another one that is apropos since search is still Google pretty much all the way.
Finally, in the center under Facebook is the “Sea of Personal Information“–something we should all be concerned about; our privacy is important and shouldn’t be overlooked, even as we open up and share of ourselves more publicly than ever before.
There really is something about a picture being worth a thousand words–I like the Map and how it portrays this activity and I am interested in seeing how this evolves as well as in how this might be applied to other social issues including everything from alternative energy to the spread of democracy and human rights.

http://news.yahoo.com/video/us-15749625/predictive-policing-22251759
Watch how COMPSTAT (COMPuter STATistics) and technology is being used for predictive policing.
Data, geographic information systems (GIS), and business intelligence/analytics come together to predict and fight crime in major U.S. cities like LA, NY, and others.
As one officer said: “Information can predict the future. Information can lead you to make good decisions and it’s shown in a business model everyday!”