Wow this was tough…

I was at a luncheon with some friends, including a couple we’re friendly with that’s been dating a while.

At one point, the young man gets up to get some more food, and the young lady all of a sudden asks me, “Do you still live around here?”

I said “Yes, not far from here,” and in turn asked whether she was still living in {blankty blank neighborhood}.

She said, “Yes, {and continues sort of out of the blue} and we’re not going to live together until we get married.”

I was sort of surprised at the turn that her answer took about their relationship, and innocently asked, “So does that mean you guys are planning on marriage then?”

Immediately, the young lady says to him before he even sits back down, “He’s asking if we’re getting married {and for some reason she’s literally pointing at me or am I imaging that finger like a dagger coming out}!”

At this point, I think my eyes started to bug out a little as I must’ve had this look on my face like what the heck is going on here.

But if this isn’t going bad enough {what in G-d’s name did I walk into with this?)…

This older lady across the table, starts blurting out loudly saying, “How would you like if she ends up with another guy?!!!”

Holy sh*t {where is that coming from now?)!

The guy next to me is obviously at the point of fury {I can’t say that I fully blame him}, and he packs up his stuff and sort of storms off from the table.

The young women is still there trying to make conversation as if this whole thing just somehow didn’t happen.

But it did and it was pretty ugly!

The older lady {not stopping–this is madness} then chimes in again and says, “Look at what he did, he stormed off–if I were you, I would just drop him!”

We’re all sort of sitting there in complete shock now.

Pulling for a straw to somehow make this scene go away, I ask the young lady, “Should I go out and see if I can speak with him?”

Within a couple of minutes, we excused ourselves and headed out–sort of not believing how this whole scene went down.

One thing I can tell you is do not get ANYWHERE near people and their relationships–there are a whirlwind of just under the surface feelings, agendas, and finger-pointing ready to take flight and eradicate everything in the vicinity of ground zero.

Anyway, I hope everything works out okay for this couple…they actually do seem really nice together.  😉 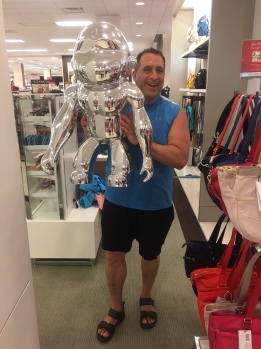 So I learned something new about being Mr. Fix It.

First of all, depending on how you look at things, you are either the guy who miraculously arrived on the scene and fixed what was so horribly broken and dysfunctional for way too long.

You are the one who broke what was working so well before you came along and messed things up.

Second, just because you want to fix things, doesn’t mean that the system or actors want it fixed.

Often, they are used to it that way and are comfortable in their managed chaos.  Objectively better is not necessarily better to those who like to fly below the radar and aren’t looking for change or perceived trouble.

Dealing with what’s wrong means not only admitting something is broken, but also committing to putting in the substantial effort to fix it. To some people, why even go there?

You may be getting up after breakfast energized to take on the dysfunction, but the organization is frozen in it’s own sickness and the fever isn’t going down or away.

Be careful what you try to fix, because rather than kudos for a job well done, you may be walking into the blame game where after all, pretending that there is no problem to begin with is the greatest shenanigan to hide behind of them all.

Here are three crafty ideas for improving our cyber security that can be used to protect, prevent, and recover from attacks:

1) Intrusion Deception (not detection)–Mykonos Software aims to protect websites by putting up a virtual minefield–“setting traps to confound hackers.” When the software detects hackers trying to infiltrate, it can flood hackers with false information on vulnerabilities that goes nowhere, mess with the hackers computers such as by pop-up flashing maps of their locations and local defense attorneys, and disrupt their connections and slow down their hacking attempts (Bloomberg BusinessWeek).

2) Scamming The Scammers–Notorious email spams such as from Nigeria that look to ensnare victims into wiring money overseas in order to secure some lost fortune costs $9.3 billion in losses in 2009. Psychology professors Chris Chabris and Daniel Simons suggest that we can prevent many scammers from succeeding by raising the cost of their doing business by scamming them with ” baiters” that send responses to scammers and occupy them but never actually send any money. They suggest that artificial intelligence could actually be used to create “automated scam-baiters bots” simulating potential gullible victims. These bots could even be programmed to provide phony account numbers and data to scammers to really get them spun up. (Wall Street Journal)

3) Insuring Again Losses–Insurance is a common way to manage risk by purchasing coverage for potential liabilities–this is used to indemnify against losses for everything from auto accidents to home fires, personal theft, and business interruptions. However, according to Bernard Horovitz, CEO of XL Insurance’s Global Professional Operations, businesses (and of course, individuals) are rarely are covered by insurance for hacker attacks. Insurance companies are now offering specialty products to recover from the insuring liabilities. Additionally, the insurers will “help with preventing and mitigating cyber crime” through security audits. (Wall Street Journal)

These three cyber security strategies are great examples of how we can make it technically and financially more difficult for cyber attackers to succeed in geting in a knockout punch on their victims. 😉