So it’s not supposed to be this way.

While of course, there is a media bent, it’s not supposed to be a downright bias–the media’s job is to report the news, not take absolute sides.

Yet these days, the alt-left media seems most hell bent on incessantly attacking the President and working to delegitimize him.

And the President is calling the news media, “the enemy of the American people.”

Russ Limbaugh commented: “The media did not make Donald Trump and they can’t destroy him.”

It started with the election when biased media outlets “ordered employees to destroy Trump“and tried to convince Americans that he absolutely couldn’t win.

And only 4 weeks into the now Trump presidency, they are calling that “Congress should impeach Donald Trump.”

What type of Democracy is this?

For eight years, Obama ruled and the media glowed bright with near endless praise–even when things went very wrong, the media played the Secret Service and took the bullet shielding Obama’s every move.

Now with the Trump, the media is no longer the Praetorian Guard, but the the assassin in waiting–plotting and maneuvering for their chance to fire the fatal shot.

Will it be Flynn, the Russians, the Islamic Terrorist immigration ban or something entirely else.

The media has the people’s ears…they can spread the news or seed gross and even malicious propaganda.

While Trump wants to put America First, many media outlets are instead looking to put Trump out to his final pasture.

When they are targeting the President in such a merciless and endless barrage of negativity and hate, can even President Trump survive?

While the alt-left media–with funding by billionaire George Soros–kicks and punches away with every article and news segment, it’s our democracy that is surely taking the power beating and dying the death of bias and overthrow.

So the way the alt-left are fighting it out with President Trump…with violent protests, riots, marches, insults, beatings, fires, broken windows, and sheer contempt,  you’d think we were in a third world country under a brutal dictator, or worse.

Gone is the respect, decency, compromise, and diplomacy among valid differences of opinion and points of view.

Talking it out and working it out…forget about it.

Aside from taking up arms, it’s almost like this country is in a second civil war.

The United States has become the divided states.

California wants to secede (like Texas wanted to previously).

Lawsuits against the President.

Screams, posters and groups of “Not my President.”

Celebrities threatening to pack up and leave the country.

Refusals to carry out the laws of the land.

People joining the resistance and underground.

Plotting and threats for a military overthrow of the Presidency.

Calls for blowing up the White House.

Tweets calling for assassination and pics posted of what it would look like.

Yet there are no death camps, no razor sharp wire, no attack dogs ripping the flesh off people, no forced labor, no death marches, no brutal beatings, no starvation of prisoners, no poison gas showers, no crematoria, no firing squads, no mass graves, no gruesome experiments on twins, no vicious assaults, no sexual abuse and rapes, no Star of David patches to be worn, no threats to exterminate.

While of course, we need to ensure “Never Again” for all of us– even the slightest inkling of it–is there really a bona-fide “again” or “inkling” here in the first place? 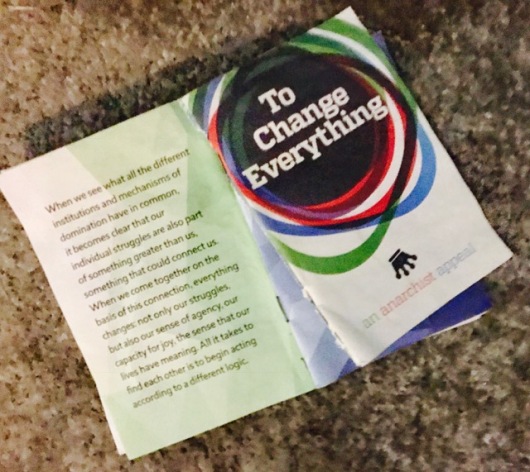 So this is what they are reading in Washington, D.C. now:

Anarchists and Anonymous are no longer underground, but are coming up and above it.

Legions of people looking not to change the system, but to violently overthrow it.

According to the anarchists’ video propaganda:

“The more stable our structures, the less stable our lives…No piecemeal reform can fix this, we have to rethink everything to fix this.”

They are advocating the power of the masses to overthrow ALL authority!

“The only way to secure the things we care about is to build a leaderless mutual aid network capable of self defense…to abolish domination all together…not to stabilize the system by reforming it. Rather than calling for more legitimate rules and rules…set our own agenda on our own terms…develop the power to act autonomously.“

Unfortunately, with the extremely low ratings and low trust of the government, people are turning to anarchy instead:

“To change everything. Start everywhere.”

So, while left and right are fighting and denigrating each other, the political system, and our institutions, and gridlock–rather than effective governance and progress–is the dominant force in DC, a frightening vacuum is opening up to those who seek chaos and mayhem.

Everyone is so busy fighting for a larger slice of the pie for themselves, that we are putting the entire societal pizza in danger of landing flat.

It’s not just Russia, China, Iran, North Korea, and ISIS taking advantage of the selfish and greedy aspirations of politicians and special interests in our society.

Those individuals and groups–internally–that distrust and dislike what they perceive as “Big Brother,” and the arbitrary and abuse of authority, for power and money’s sake, are sensing their chance to agitate, disrupt and overthrow the civilized society we depend on.

Apocalypse is not just World War III, weapons of mass destruction, and earth-shattering disaster, but it can be the disaffected masses that decide there is no reforming the system, only overthrowing it and taking their chance at chaos, rather than continue to live with corruption.

And if this is what people are reading in the Capital of the United States of America…if you are not afraid of this awful mess, you most certainly ought to be. 😉