So when I saw this colored rock last evening, it made me think two things:

One, cool idea, looks nice and fun to make.

Two, it reminded me of the Pet Rocks in the 1970s that made millions (this one was hippie even though those back then weren’t actually even colored).

A business guy came up with the idea to sell smooth rocks from Mexico beach and market them as pets.

Yeah, they are so lovable and easy to care for!

It was one of the great branding and marketing events of the 20th century.

Who would think people would actually spend money on a plain dumb rock that you could basically pick up off the street?

But incredibly, putting the rock in a box with holes (so the rock could breath) and sitting it on a little stack of hay with an joke of instruction book for caring for your rock, SOLD.

The guy became a millionaire and got rid of a truckload of worthless rocks.

Yes, “One man’s garbage is another man’s treasure!”

But surely this was getting a little ridiculous.

Hey, I’ll give you a nickle for the shinny painted rock in the photo here. 😉

Who would think you’d find a car like this in Washington, D.C.?

Definitely a standout, you think.

Although it seems like the people crossing the street don’t even notice it.

Anyway, where do you park a car like that?

It’s nice to look at, but between people wanting to steal it or deface it, I think it’s probably more trouble than it’s worth.

There are enough loonies out there…why give them a reason.

Then again, if you tether yourself to it, maybe it’s good for a joy ride around the Capital especially before the new tariffs kick in.  😉 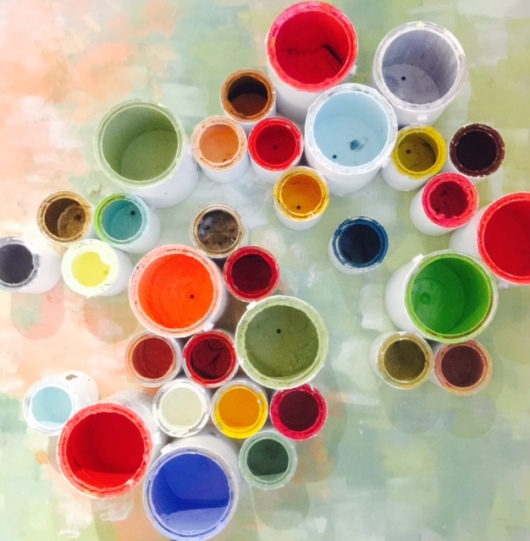 Thought this was pretty cool art in Anthropologie in Washington, DC.

It was different paint cans attached to the wall in the store in a colorful display.

To go with this paint theme, they also had paint brushes (dry of course, but they looked wet with colored paint) hanging from the ceiling.

Anyway, in the back of the store, there was a beautiful new rug that I got for my daughter–it was a real find (and sort of looks like this paint display in terms of colors, but very refined and feminine for her with gorgeous flowers and a rich texture).

Anyway, she loved it and I ended up getting a pretty good deal on it, so I was happy too. 😉

This is a photo of a chalkboard car.

And on the hood is written “Happy Memorial Day!”

On the side was a design in chalk and on the back even a peace sign.

Wouldn’t it be sort of funny if everyone had a car with handwritten messages on it (as long as they were kept clean and non-aggressive).

A little entertainment, humor, how ya feeling today, and more.

It’s also nice when we don’t take ourselves so seriously and can just have some kosher fun in life. 😉